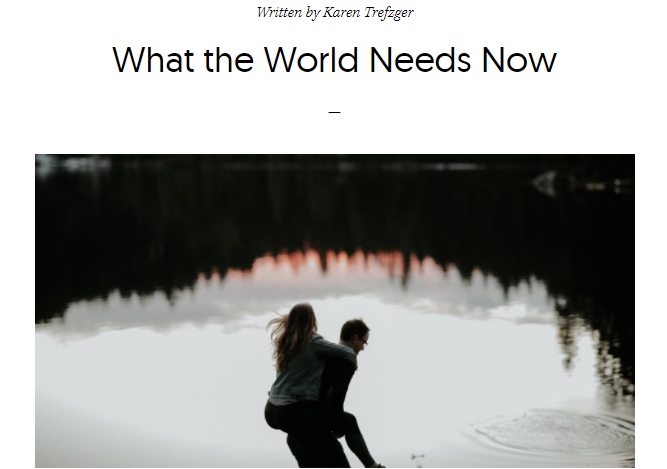 One of our readers sent this to me and I thought it very appropriate and something I could republish while on my Spring Break….

What the World Needs Now

I guess I expected that having been prevented from mingling with other humans for most of 2020, people would greet the return of social activity with smiles, hugs, and good fellowship. But I was wrong.

An October 2021 article on time.com, entitled “Why Everyone is So Rude Right Now,” reported several incidents of assault on restaurant workers, a bus driver, and a flight attendant when clients were asked to wear a mask or control their language or behavior. Stores, restaurants, clinics, and even lawyers are experiencing ruder clients. Hospitals report increases in violence and racism toward their staff. Flight attendants, for whom rude clients are no novelty, are dealing with mayhem. (FAA fines for unruly behavior set a new record in 2021.)

I’ve seen it myself – many people seem less friendly and more impatient than before. I hear more foul language, and opinions are expressed with more venom. Traffic on the road is pushier and more inclined to ignore the rules.

Psychologists explain that the long separation has made social interactions more difficult. The combination of a contagious, life-threatening disease and a series of unprecedented changes in the rules of human engagement have left people anxious and, especially if they do not believe the restrictions were necessary, full of resentment.

“We’re going through a time where… people’s threat system is at a heightened level,” says Bernard Golden, a psychologist and the author of Overcoming Destructive Anger. “During COVID there has been an increase in anxiety, a reported increase in depression, and an increased demand for mental health services.” This is true whether or not we believe the virus is a serious threat, he adds. “Half the people fear COVID. Half the people fear being controlled.”

As a society, we’re not used to having our wants curtailed, even for a short time. As the COVID situation gets ready to enter its third year, many of us are frustrated. Even a normally calm person may be feeling the stress, and those with more hair-trigger dispositions can be set off by seemingly minor events. Our fight-or-flight response is on high alert, and it seems that many of us are defaulting to fight mode.

I think that some of this goes back to before the pandemic. There’s been an increase in rude public discourse, both from political leaders and in online discussion, which sort of encourages vehement emotions. “We don’t filter ourselves as much as we used to,” says Golden. “On the internet, people feel like they can say anything. They no longer guard themselves. And I think they transfer that lack of filter into public life.”

Yes, it is hard to convey a smile through a mask. And of course, we have spent quite a bit of time not shaking hands or even standing close to one another. I’ve gotten into the habit of meeting people’s eyes and saying “Hi” or “Good morning” or whatever, but I often get no response. More of us seem to be disconnected, walled off from others by choice rather than necessity.

This lack of empathy can lead to careless rudeness, but for some the bad behavior might be deliberate. Steven T. Zech, Assistant Professor in Politics and International Relations at Monash University in Melbourne, Australia and co-author of Recovering Civility during COVID-19, says “It’s meant to call attention to what they see as this kind of unjust policy, some discrimination, or some infringement on some other right.” In the minds of some, snapping at the cashier or the school nurse, or driving around with a big flag that says “[expletive] [elected government official]” waving from their pickup truck isn’t rude, it’s civil disobedience.

So if this bad behavior isn’t just a short-term response to the stress of the pandemic, but a shift that indicates something much deeper, then resolving it may be a difficult process. Meanwhile, what can we do?

Golden says, “All of anger management involves pausing.” So stop. Breathe. Lower your voice when encountering difficult social situations or angry people so as not to make the situation worse. Give up the need to have the last word.

Next, consider setting limits on your news intake. Most news outlets depend on advertising revenue and compete aggressively for our time and attention. They intensify the drama in order to hook viewers or readers and keep them engaged, which is why you’ll see the most disturbing and provocative stories reported over and over. As you repeatedly check headlines or social media, your levels of outrage and stress climb higher.

Finally, remember to give thanks. Thank the grocery clerk, bank teller, barista, delivery person, or anyone else who serves you and wears a mask all day for your protection. Thank the people who make your life better – your child’s teacher, your pastor, your doctor, your parents, friends, children, your spouse.

Spread gratitude as if it is air or water, because it is that important.

None of this is easy. But do we really want to live in a society that accepts rude, insensitive, unkind behavior as the norm? I certainly don’t. So I have to do my part to make things better, if I can.

What the world needs now – what it always, always needs – is love, peace, and gratitude. Can we reach outside of ourselves to offer it?

About the Author: Karen Trefzger is a writer, singer, teacher, wife, mother, and grandmother who has been choosing a simpler life for over 20 years. She is the author of Minimalism A to Z, and blogs at MaximumGratitudeMinimalStuff.