This is the second “vacation” post, revisiting some of the more  important articles to have appeared on my blog over the years.

The original post, along with the comments, can be found here. See also, these other posts on the subject of scientology “arbitration” li9nked lower in this post. 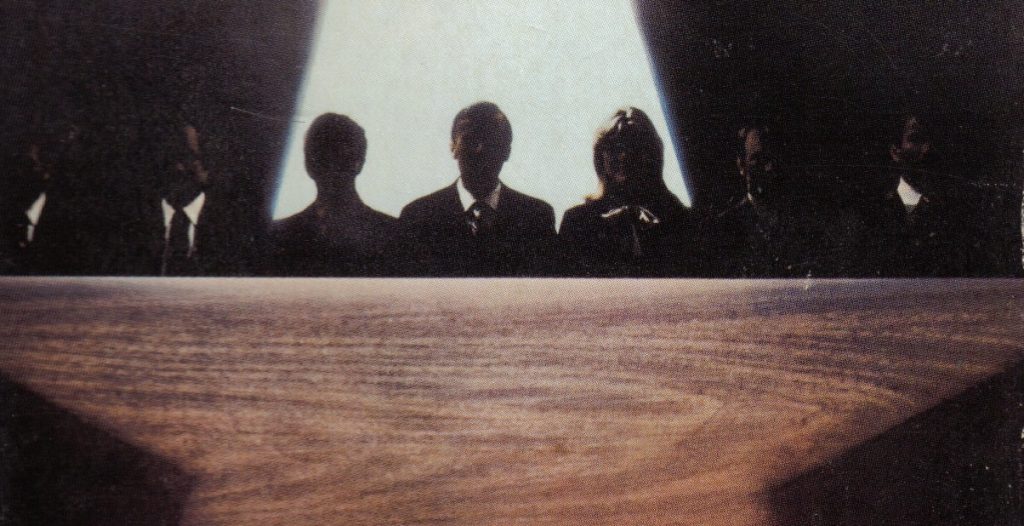 Scientology has managed to persuade courts that people who signed Enrollment Agreements as a condition of starting a scientology service, are bound by a paragraph of the agreement where they agree to resolve disputes through a scientology “religious arbitration.”

Here is the language from those agreements. 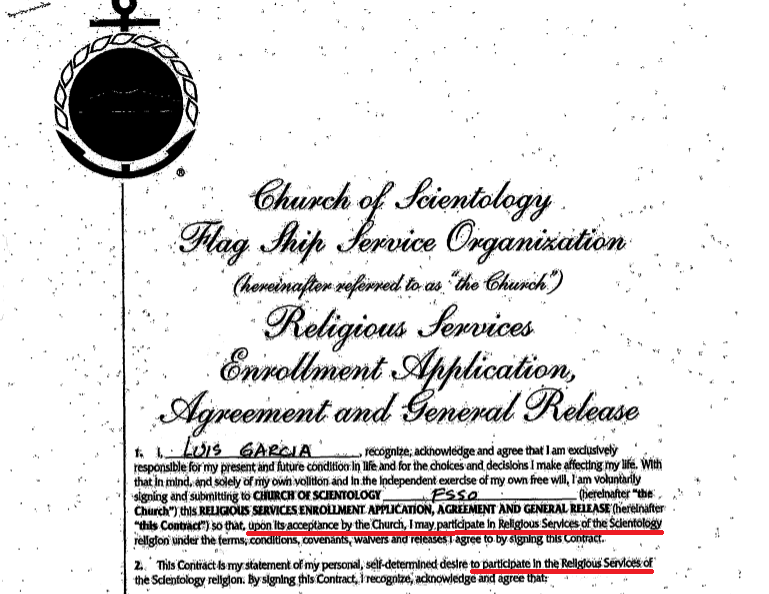 This is the paragraph concerning religious arbitration: 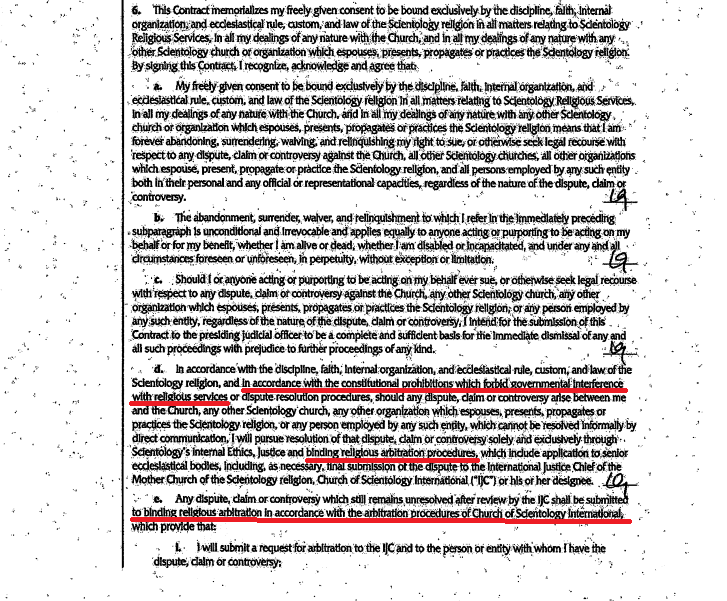 Set aside whether an agreement to participate in services can encompass claims that have nothing to do with the service that is the subject of the agreement; there is another more significant problem with this “religious arbitration.”

Before this agreement was drafted, there was no such thing as “scientology religious arbitration.” It did not exist anywhere in the policies or writings of L. Ron Hubbard, and it still does not. In fact, all the way until the Garcia’s filed a lawsuit and scientology sought to enforce this agreement, nobody had any idea what a scientology religious arbitration was and such a thing had NEVER been held.

When the court in the Garcia case asked scientology to provide the details of how the arbitration would be conducted, scientology responded: “The Church of Scientology International Justice Chief (“IJC”) has ruled that the procedures and rules governing a Committee of Evidence apply in arbitration proceedings.”

Of course, they did not want courts looking too closely into what those procedures and rules are and how a Comm Ev is conducted in scientology, as that would make it clear it is not in any way similar to “arbitration” that courts love to use to lessen the case load they all face. There is a standard for arbitration set by the American Arbitration Association and typically these proceedings are overseen by retired judges. They are a substitute for a trial. And they are supposed to be neutral and fair. Like going to court.

Here, scientology demands to have their cake and eat it too. Every last crumb. They want the courts to enforce their “Committee of Evidence” ritual through a “legally enforceable” contract, but they claim the same court they want to enforce their agreement canmot involve themselves in making judgments about their “ecclesiastical jurisprudence” and thus running afoul of the First Amendment.

As with everything else in scientology, the procedures of a Committee of Evidence are described exactly by L. Ron Hubbard. While as I noted above, a thorough search of all his writings finds no mention of a religious arbitration.

Scientology has hoodwinked courts into accepting that a Committee of Evidence is a valid “arbitration” but it is nothing of the sort.

Hubbard described a Committee of Evidence this way: “A committee of evidence is convened on the subject of a known crime or high crime and it has come to be looked on (and is) a trial by jury there being a charge.”

Of course, the presupposes a crime or high crime has been committed — NOT what a “neutral” arbitration does — and is charged with determining what the punishment is to be for that crime.

Anyone who has ever been called before a Committee of Evidence will tell you, you are assumed guilty of the charges you are accused of. Only those lying to protect scientology would say otherwise.  It is a committee that is supposed to figure out how light or heavy the penalty imposed on you will be. Filing a lawsuit against scientology is a High Crime. Reporting to the police is a High Crime. A Committee of Evidence is a classic Star Camber (The term star chamber refers pejoratively to any secret or closed meeting held by a judicial or executive body, or to a court proceeding that seems grossly unfair or that is used to persecute an individual).

Here are just some of the other things that distinguish a Comm Ev from an arbitration:

Hubbard also states: “Suppressive Persons or Groups relinquish their rights as Scientologists by their very actions and may not receive the benefits of the Codes of the Church.”  It is without question that anyone who has filed a lawsuit against scientology is designated a Suppressive Person. They cannot be granted any relief by scientologists in good standing. In fact, they are not supposed to even communicate with them.

When the sham “arbitration” in the Garcia case was held, the Garcia’s were not allowed to have their attorney present, though the attorney for scientology was there. The evidence they presented was mostly rejected by the arbiters, claiming it was “entheta” (i.e. was negative towards scientology). They claim they had no obligation to accept any evidence from the Garcia’s the arbiters didnt like. There was no record made of the proceeding, though the Garcia’s had requested this. Yet the Comm Ev policies call for the meetings of the Committee to be recorded.

I have written previous articles about scientology arbitration and what a travesty of injustice it is. It is equivalent to sending a lapsed Catholic to the Inquisition to determine whether their claims of abuse at the hands of the church are valid.

Scientology wails about the rights to freedom of religion under the First Amendment for THEMSELVES and rejects the notion that individuals are protected by the same Amendment and cannot be forced by courts to undergo religious rituals that are part of an organization to which they no longer subscribe.

Below is the full text of main policy letter describing a Committee of Evidence: 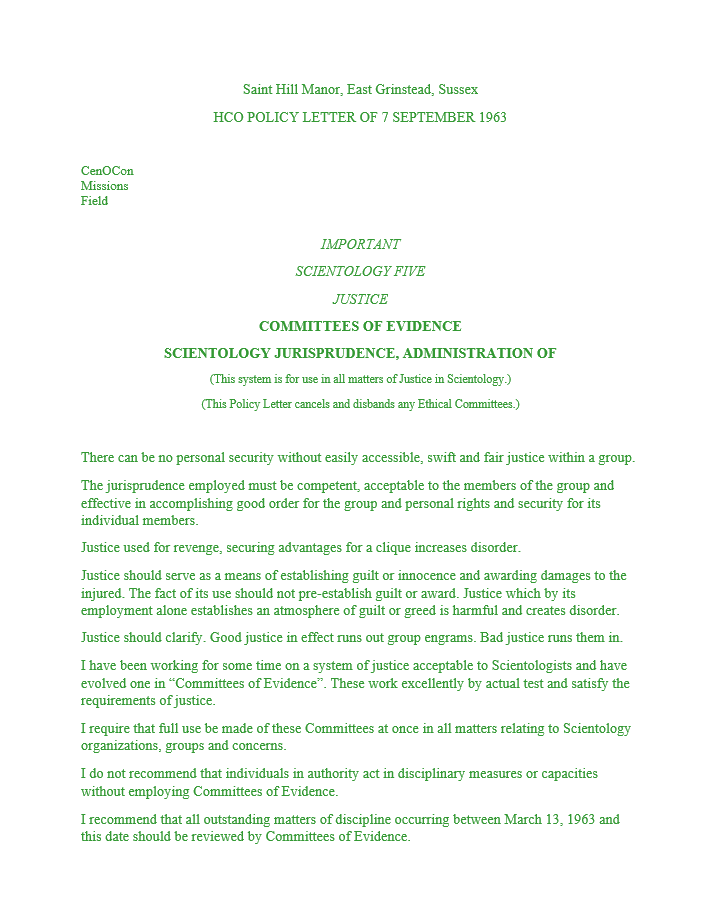 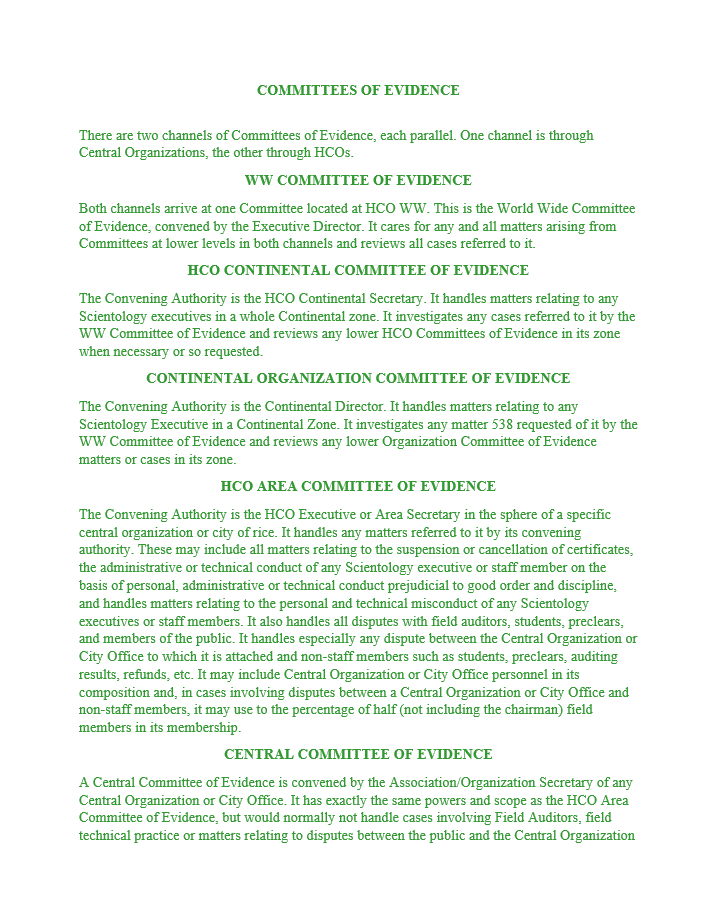 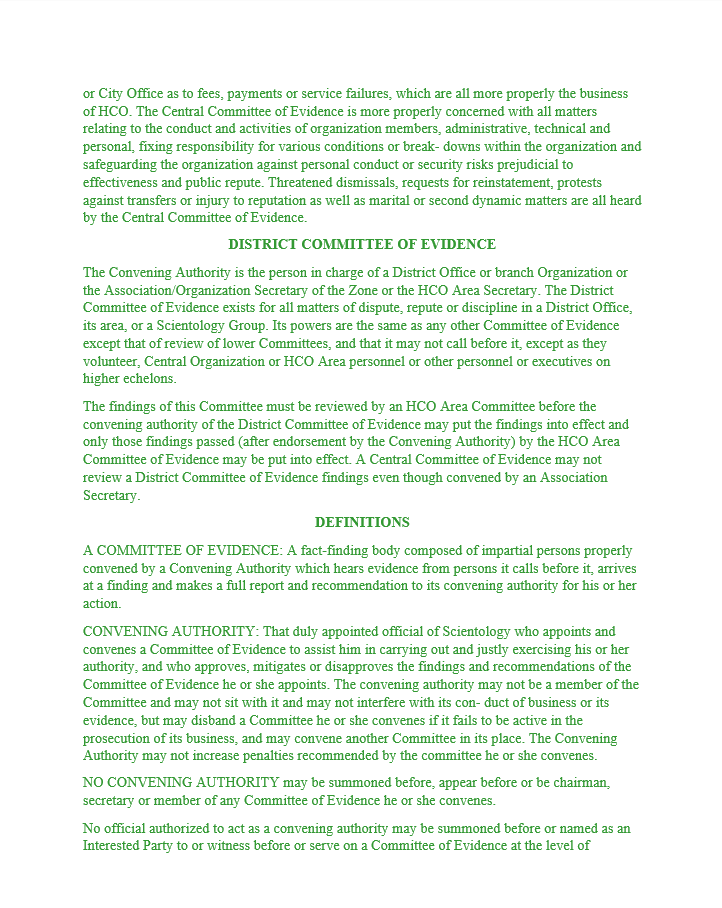 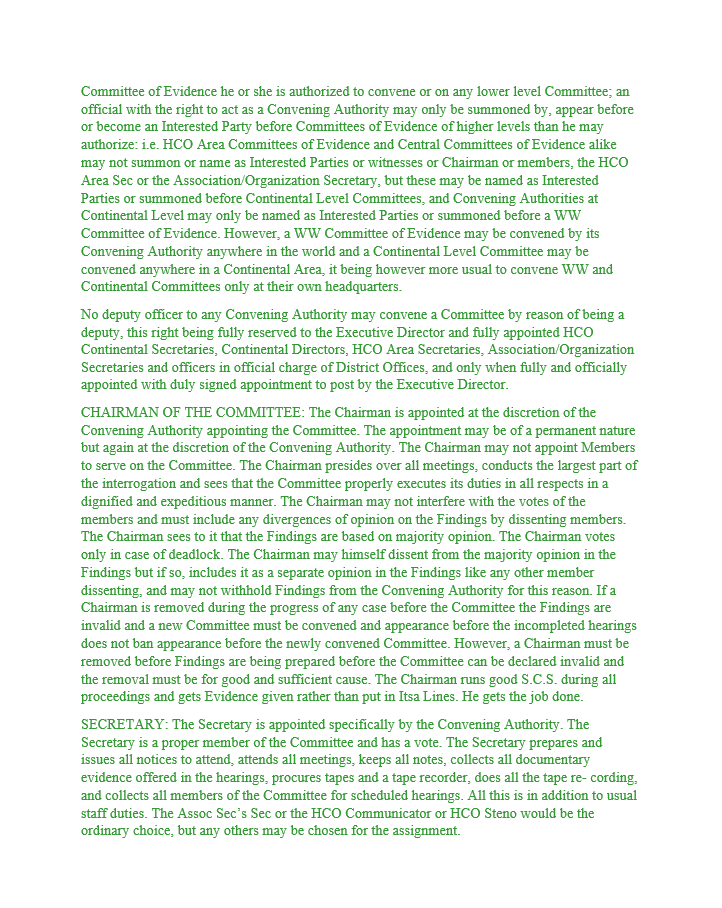 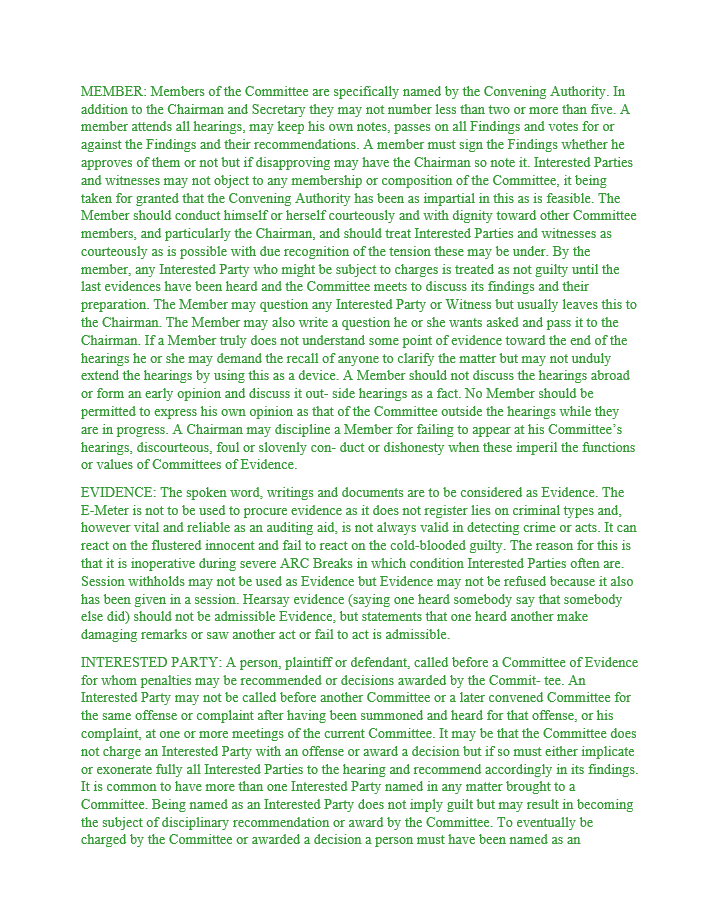 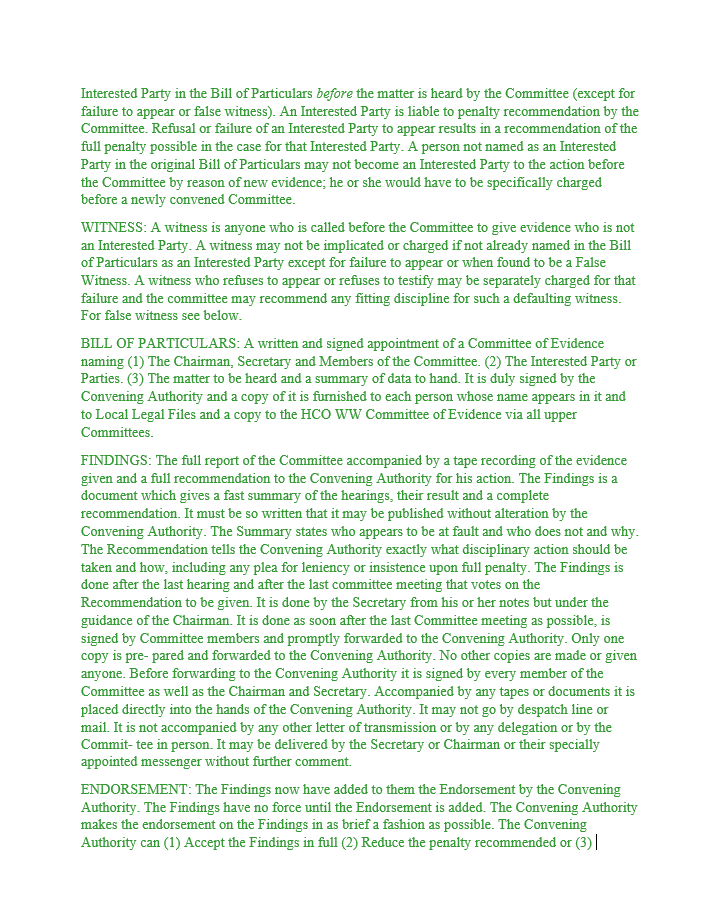 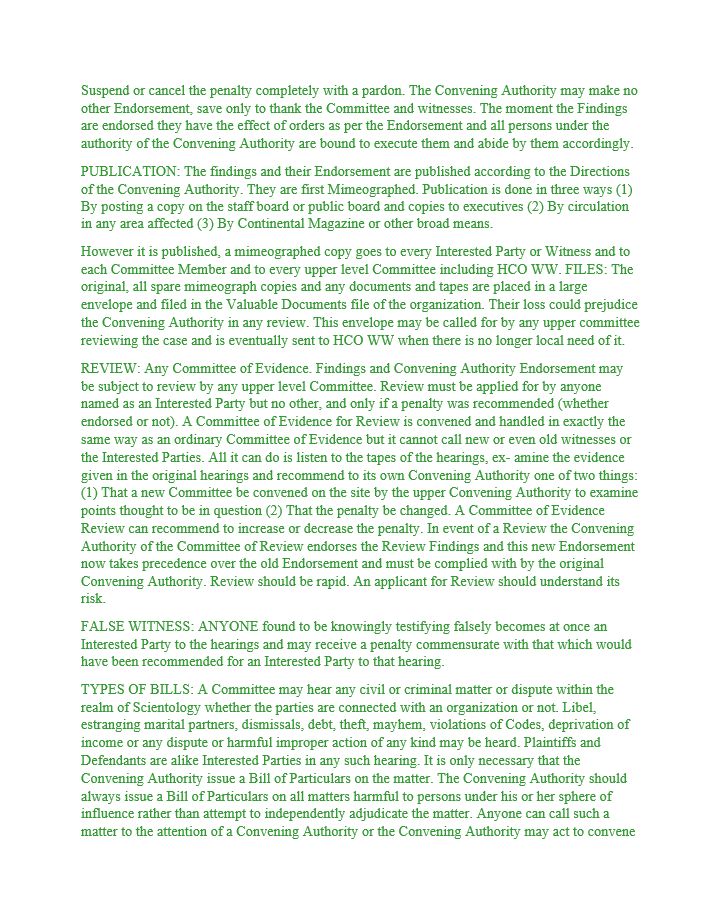 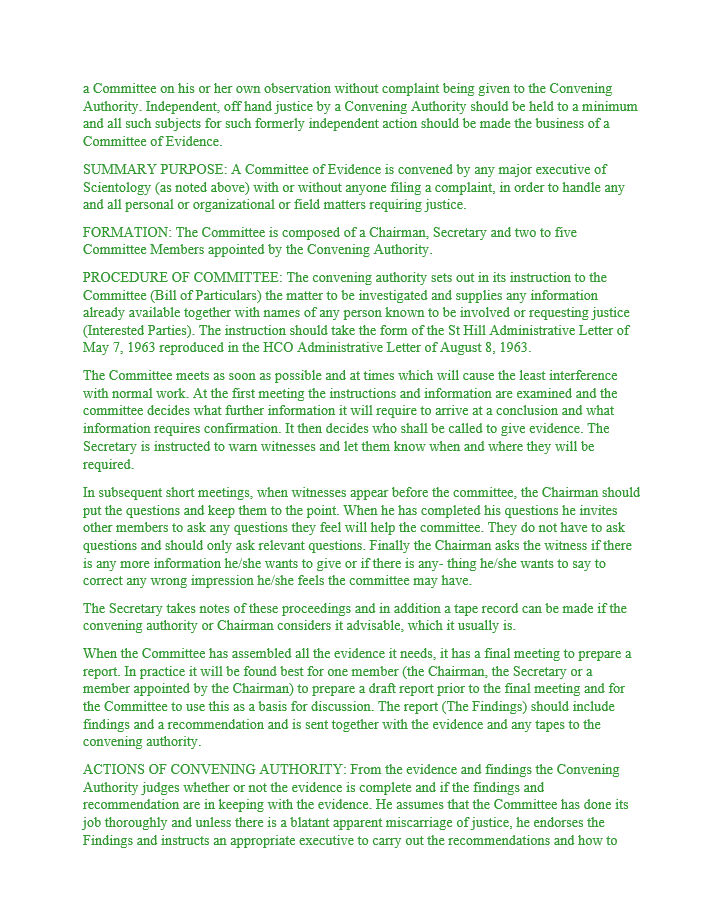 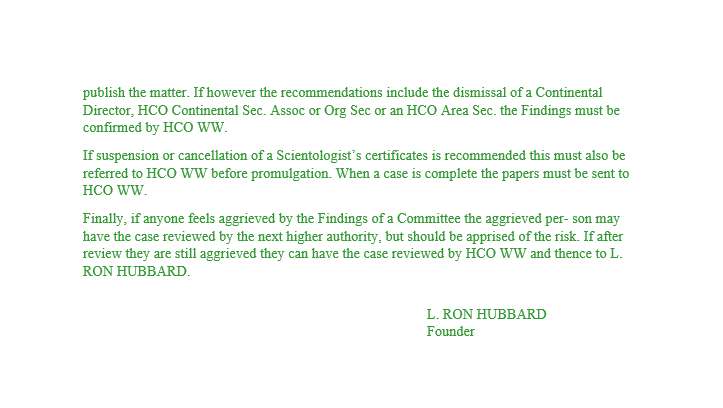