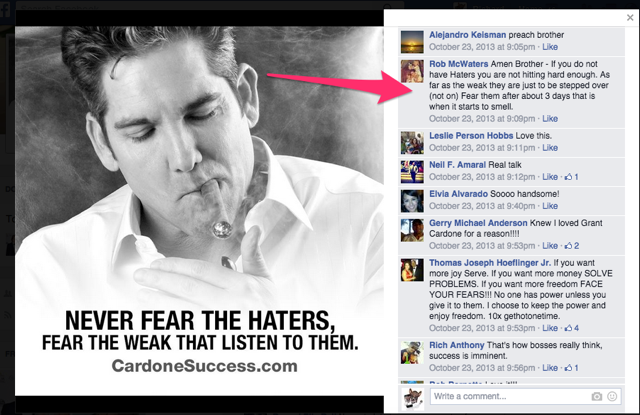 The real question here is how “GC” applies his philosophy to himself.

Does he fear the church? Is this why he and his beautiful bride hand over so much cash to keep the church happy?

In that case, does he classify himself as the weak that listen to them?

This guy is a caricature of everything that is bad about scientologists. Money and status obsessed. Arrogant. No empathy. And absolutely certain he has the answers to everything.

Except perhaps how he can be such a dupe…

Someone has done an excellent job with the new Wikipedia entry for Going Clear.

It was mentioned on the South African blog yesterday and I tweeted and commented on it on Facebook, but I thought it was worth repeating here. It really summarizes a lot of information in a concise fashion and captures the whole flavor of the documentary and the response from the church.

I reprint the majority of the text below, to see the full entry, click on the link above.

This is scientology footbullets preserved for eternity — like insects in amber. Their toothpaste of bile and insanity is not going to be sucked back into the tube.

Thanks to whoever it is that did the work to put together this entry.

Going Clear: Scientology, Hollywood, and the Prison of Belief (film)

Going Clear: Scientology, Hollywood, and the Prison of Belief is a 2015 documentary film about Scientology directed by Alex Gibney, based on Lawrence Wright’s 2013 book of the same title. Produced by HBO, the film premiered at the 2015 Sundance Film Festival in Park City, Utah. It received widespread praise from critics for its deconstruction of the church’s claims through a combination of presenting a condensed history of Scientology and its founder, how celebrities interact with the church, the stories of a number of ex-members and the abuse and exploitation that they described seeing and experiencing.
The film is based on the Pulitzer Prize-winning journalist Lawrence Wright’s book Going Clear: Scientology, Hollywood, and the Prison of Belief, which was published in January 2013 and was a National Book Prize finalist. HBO announced in December 2014 that Alex Gibney, an Oscar-winning director who made Taxi to the Dark Side and The Armstrong Lie, was directing a film based on the book, to be released at the 2015 Sundance Festival. It was the first time that HBO had tackled Scientology directly, though not the first time it had clashed with the church, which had mounted demonstrations outside HBO’s headquarters after a 1998 documentary presented anti-depressant drugs – fiercely opposed by Scientology – in a positive light.[1]

Gibney began working on the film in 2013 after becoming intrigued by Wright’s book. He collaborated with Wright, who came on board as a producer, to explore the book’s underlying theme of “how people become prisoners of faith in various ways”.[2] He saw Scientology as one of the toughest subjects he has had to tackle in his career as a documentarian, alongside government complicity in torture, corporate financial malfeasance and clerical sexual abuse.[2] Due to fear of Scientology’s litigiousness, no American network was willing to license any material to the film makers, which Gibney found “astounding”.[3]

He told Reuters: “I chose to make this film because I think it’s an important topic. Not only about this church of Scientology, which everybody’s fascinated with partially because of the celebrities, but partially because of the way that the church seems to turn people to do things that I think they would normally never do if had they not entered the church.”[4]Gibney, Wright and the former Scientologists who appeared in the film told a post-screening question-and-answer session that they hoped that it would raise public awareness about the alleged abuses committed by the Church of Scientology and would prompt the media and law enforcement agencies to investigate further.[5]

Going Clear is based closely on Lawrence Wright’s book, covering much of the same ground with the aid of archive footage, dramatic reconstructions and interviews with eight former Scientologists:[5][2] Paul Haggis, the Oscar-winning director; Mark Rathbun, the church’s former second-in-command; Mike Rinder, the former head of the church’s Office of Special Affairs; the actor Jason Beghe; Sylvia ‘Spanky’ Taylor, former liaison to John Travolta; and former Scientologists Tom DeVocht, Sara Goldberg and Hana Eltringham Whitfield.[6] It recounts the history of Scientology and its founder L. Ron Hubbard and airs allegations of the abuse of church members and misconduct by its leadership, particularly David Miscavige, who is accused of intimidating, beating, imprisoning and exploiting subordinates. It highlights the role played by celebrity members such as John Travolta and Tom Cruise through the use of video clips contrasting their statements on Scientology with the experiences of former Scientologists.[7]

The film shows footage of ex-Scientologists being harassed and surveilled, as per Hubbard’s dictum that the church’s critics were all criminals whose crimes needed to be exposed,[8] and documents the imprisonment of senior Scientology executives in a facility known as “The Hole”.[9] One Scientologist was said to have been forced to clean a bathroom with his tongue.[10] According to the film, the actress Nicole Kidman was targeted for wiretapping by Scientology in an effort to break up her marriage with Tom Cruise after she was labeled a “potential trouble source” by the church.[11] It also asserts that John Travolta has been forced to stay in the church out of fear that his personal life will be exposed.[12]

The film was described by The Wall Street Journal as “the hottest ticket at the Sundance Film Festival”.[5] Its première at the festival was so popular that even those with tickets were unable to find seats because so many of those with VIP passes chose to watch the film, displacing ordinary festival-goers.[5] It attracted numerous celebrities and media figures including actors Alec Baldwin and Tobey Maguire, comedian Jason Sudeikis and New York Times columnist Maureen Dowd.[13] Unusually for a Sundance presentation, the audience gave it a standing ovation.[5] ‘Spanky’ Taylor’s appearance on stage, along with the daughter from whom the church had forced her to “disconnect”, reduced many in the audience to tears.[6]

Variety’s chief film critic, Scott Foundas, praised the level of detail in Going Clear and called it a “powder-keg” documentary that illustrates “the dangers of blind faith”.[9] Lesley Felperin of The Hollywood Reporter characterized it as an “impeccably assembled and argued film” that “represents a brave, timely intervention into debates around the organization that have been simmering for some time.”[14] Slate called the film “a stunning exposé of an organization and religion too long shrouded in mystery.”[15] Screen Daily’s Anthony Kaufman felt that some of the re-enactments in the film were “heavy-handed or sensationalistic”, but commended it overall as “a serious, strange and unsettling account of brainwashing, greed and gross misuses of power.”[16]

Writing in The Guardian, Brian Moylan described Going Clear as “entertaining and dismaying viewing” in which “the story of Scientology, with all its strange players, emerges as comedy, rather than horror”, but criticised its reliance on a small group of defectors and the lack of any involvement by the church. He felt that this made the film “a bit one-sided” and that it was “easy to be sceptical about some of the more outlandish claims made by former members”.[7] Sasha Bronner of the Huffington Post called the film a “shocking and eye-opening” work that would leave those who did not know much about Scientology “spellbound.”[17]

Ten days before the film’s première, the Church of Scientology took out full-page advertisements in The New York Times and Los Angeles Times to denounce Going Clear,[2] comparing it to a discredited story about campus rape published by Rolling Stonemagazine.[18] Gibney subsequently said that he was grateful for the church’s advertising, as it had attracted much publicity for the film; he only wished “they’d put in showtimes”.[8] The church also published a “special report” attacking the film on one of its websites, started a new Twitter account which claimed to be “taking a resolute stand against the broadcasting and publishing of false information”[18] and bought numerous Google search results relating to the film in order to direct searchers to its anti-Going Clear pages.[19]

The church complained that Gibney had declined to interview 25 of its members whom it had put forward to him.[10] According to Gibney, Miscavige, Travolta and Cruise all declined interviews and the church instead offered “a delegation of 25 unidentified individuals, presumably to smear the people in our film”, which did not interest him.[20] The church also denounced the film’s interviewees as “the usual collection of obsessive, disgruntled former Church members kicked out as long as 30 years ago for malfeasance, who have a documented history of making up lies about the Church for money”.[5] Two of those interviewed in the film, journalist Tony Ortega, and former Scientologist Marc Headley, reported that investigators from the church had surveiled them at Salt Lake City airport as they made their way to the festival.[8] The film-makers reported receiving “lots of cards and letters” from the church, though in their case it had limited its response to “loads of legal paperwork”.[8] HBO had earlier said that it had put “probably 160 lawyers” onto the task of reviewing the film in anticipation of challenges from the notoriously litigious church.[1]

Following the widespread publication of reviews of Going Clear, it emerged that the church had contacted film critics complaining that the reviews were “filled with bald faced lies” and demanding that they should publish a statement by the church. Jason Bailey of Flavorwire wrote that “pretty much every critic who wrote about Going Clear” received an email from Scientology spokesperson Karin Pouw. He commented that the church did not seem to realise that critics do not usually try to interview people for reviews, and noted how neatly it “comports with the film’s portrayal of the Church as a hive of shady, paranoid control freaks.”[19] In an email to Flavorwire, Gibney observed that “anytime someone writes something — film criticism or social criticism — about Scientology, the Church of Scientology counter-attacks by smearing critics.”[21] Indiewire’s Max O’Connell criticised the church’s approach as counter-productive, predicting that “their campaign against the film is going to be the best publicity that Alex Gibney and company could ever hope for, if also a hassle for critics and filmmakers and (this is no small thing) a nightmare for the ex-CoS members who dared to speak out against the Church’s practices. But then, they don’t seem terribly aware that attacking everyone who criticizes you doesn’t do a lot of good for your image.”[19]

And as a special bonus to put a smile on your face, this was on Twitter yesterday. It just seemed so perfect. 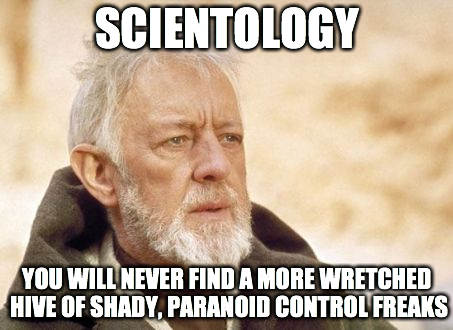