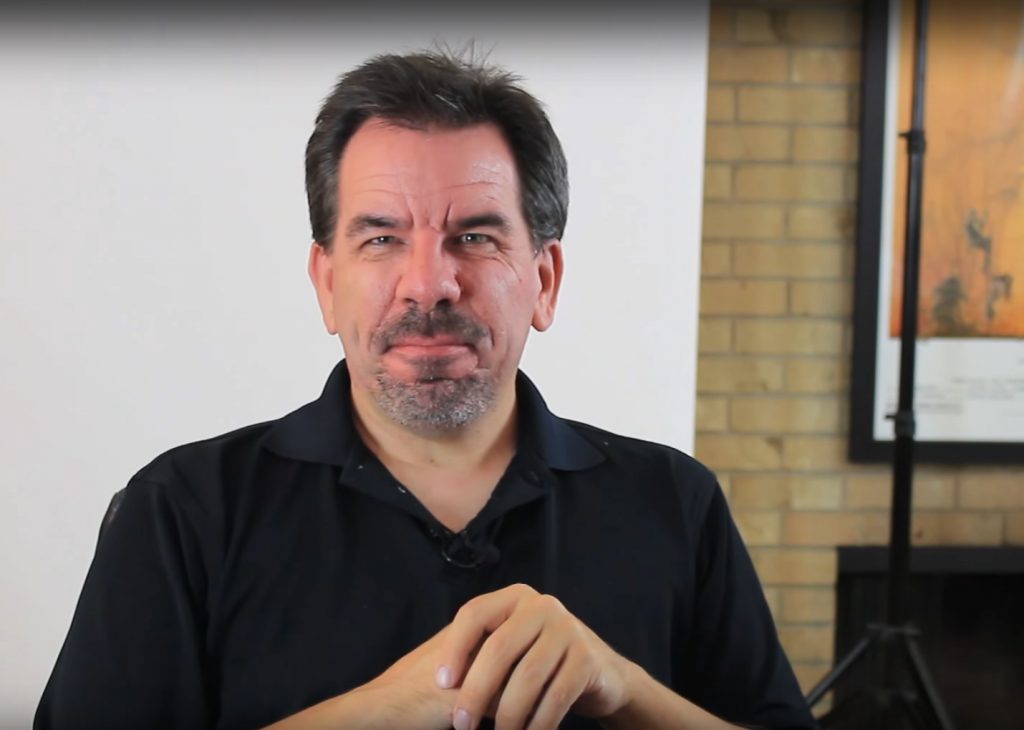 This week’s episode is a continuation from last week with Chris Shelton. We take a deep dive into the the “Truth Rundown” and Rehabilitation Project Force, but of course touch upon other things in doing so. If you want to hear more of Chris’ insights, you can tune into his Sensibly Speaking Podcast. There is a wealth of material there.

The “Truth Rundown” is one of the most remarkable things Hubbard developed. It is the most direct and unvarnished brainwashing technique in scientology. It is intended for use on Sea Org members, though some others have unfortunately been subjected to it — Leah Remini being one of a handful. It is so egregiously disgusting that the actual Hubbard writings have never seen the light of day outside the highest echelons of the Sea Org. So, we have to rely on our experiences, and fortunately can look to one of the original expert practitioners of the technique, Marty Rathbun. He wrote an excellent description of the genus of the Truth Rundown and what it consists of on his blog. I have reprinted it in full below as it is worth making more broadly known: 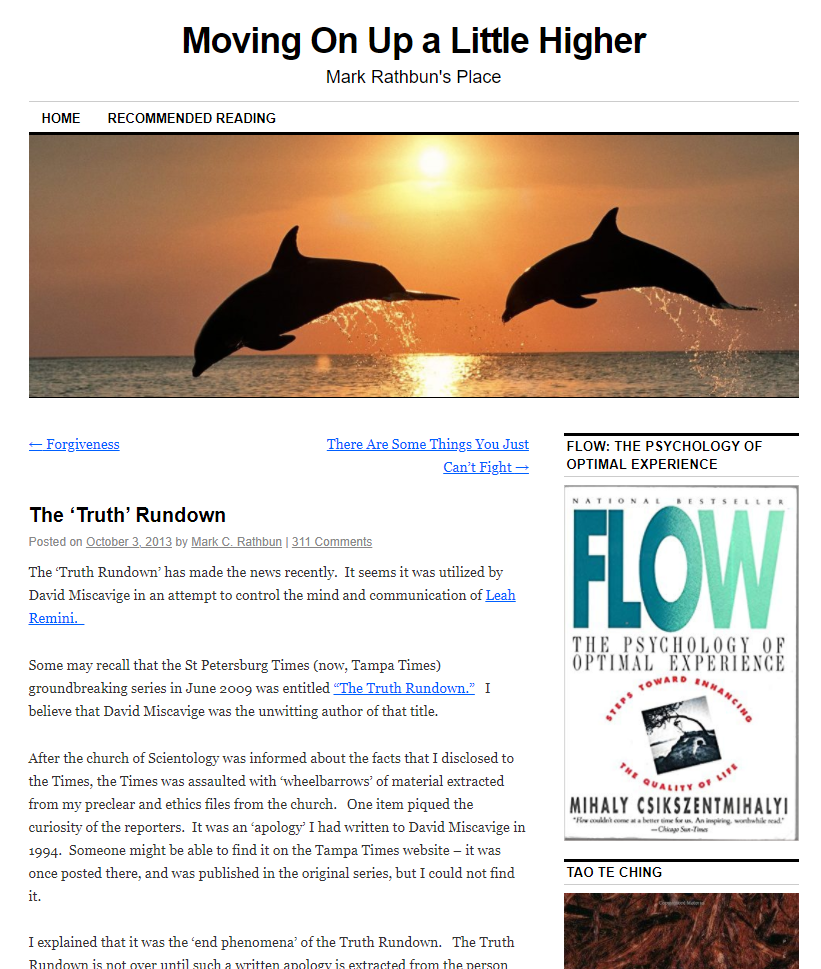 The ‘Truth Rundown’ has made the news recently.  It seems it was utilized by David Miscavige in an attempt to control the mind and communication of Leah Remini.

Some may recall that the St Petersburg Times (now, Tampa Times) groundbreaking series in June 2009 was entitled “The Truth Rundown.”   I believe that David Miscavige was the unwitting author of that title.

After the church of Scientology was informed about the facts that I disclosed to the Times, the Times was assaulted with ‘wheelbarrows’ of material extracted from my preclear and ethics files from the church.   One item piqued the curiosity of the reporters.  It was an ‘apology’ I had written to David Miscavige in 1994.  Someone might be able to find it on the Tampa Times website – it was once posted there, and was published in the original series, but I could not find it.

I explained that it was the ‘end phenomena’ of the Truth Rundown.   The Truth Rundown is not over until such a written apology is extracted from the person being subjected to the rundown.  And that is by order, and policy, of L. Ron Hubbard.   That that is the end phenomena is evident from my ‘apology’ to Miscavige.  If you find it, you can see that that is the end phenomena by my words in  the very first paragraph.  After dozens of hours of being interrogated I report that the interrogator found no ‘black PR’ (negative propaganda) had been harbored or spread by me about Miscavige.  Nonetheless, I was required to write the ‘apology’ in order to terminate the seemingly unending interrogations.  As you can see in the ‘apology’ itself, I used a little creativity in order to achieve the ‘end phenomena.’

ORIGIN OF THE RUNDOWN

When Hubbard was on the lam from lawsuits and grand juries in the early 80’s, he was flooding the Int Base (Scientology’s 500 acre compound near Hemet, California) with floods of orders to prepare for his return.  For a complete account of that era, read Memoirs of a Scientology Warrior.

Part of the orders to the Int Base included ensuring the several hundred personnel there were completely loyal to Hubbard, for security purposes.   All manner of security checking broke out in response.  That is, forced interrogations on the e-meter (a single component of a lie detector) testing the single-minded trustworthiness of adherents to Hubbard.

In the course of the mass security checking it was discovered that a long-term Sea Org member at the base had made a comment that he felt the technical training films directed by Hubbard were amateur in quality.  Of course, any intelligent person who has seen those original films would probably agree that this comment pretty well aligned with the truth.   David Miscavige certainly fit that category.  After all, he wound up spending on the order of one hundred million dollars to upgrade those films to ‘professional standards’ once Hubbard died.

But, Miscavige – and the rest of the Int Base staff – was more accomplished at keeping his true thoughts in order, and at the Int Base that means suppressed.    Miscavige, led the chorus of Int Base executives who were outraged that such black propaganda – that the films were amateur – was being spread about the Int Base.  When Hubbard received the reports, he responded with the terminated handling.  That would be the exact procedure for what would become packaged, marketed and delivered as ‘The Truth Rundown.’

Here is the truth rundown in my own words:

In my two decades of experience in administering and being subjected to the Truth Rundown, more often than not I observed it being used not to establish truth at all.  Instead, it was used to enforce trustworthiness and loyalty to the liking of the higher-up the subject had an unkind thought toward.   Generally, what occurs is the subject becomes contrite and forgets what he thought of or objected to in the first place and rejoins the group as an enthusiastic member of the Stepford (or Truman Show) culture.

Is ‘brainwashing’ too harsh of a label for this?

As for the Rehabilitation Project Force (RPF) — this euphemistically titled program is in fact the hard core internal Sea Org concentration camp for thought reform. The Truth Rundown is an integral part of the RPF program.

The issue establishing the RPF is available on the internet, and I include it below. This is the sanitized version of what really happens. While it makes clear the RPF cannot even speak to any other scientologist unless addressed by them first, and that they are to wear black boiler suits and eat separately, it does not describe what actually happens in the RPF, or that the sentence can last 10 years or more. 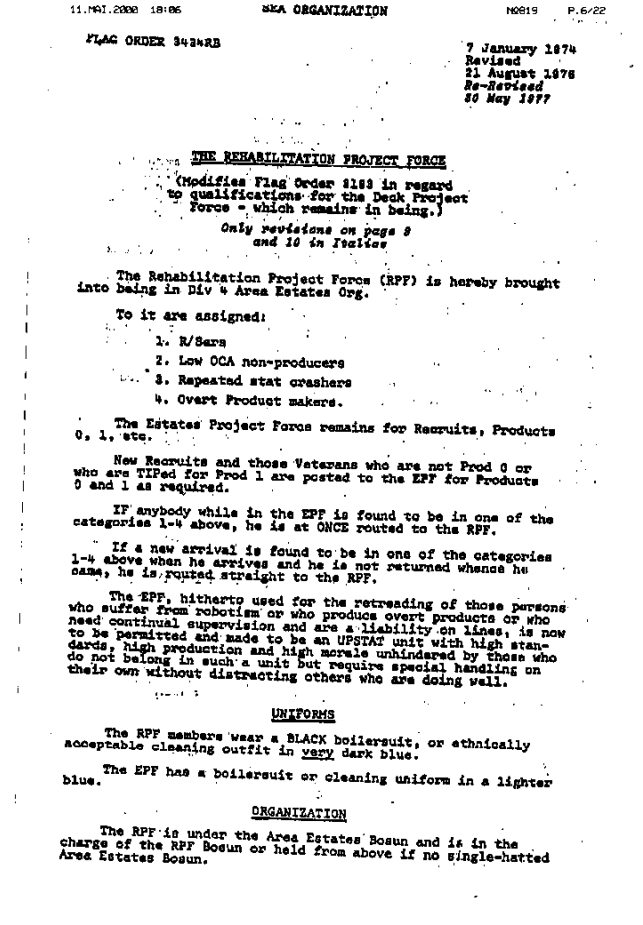 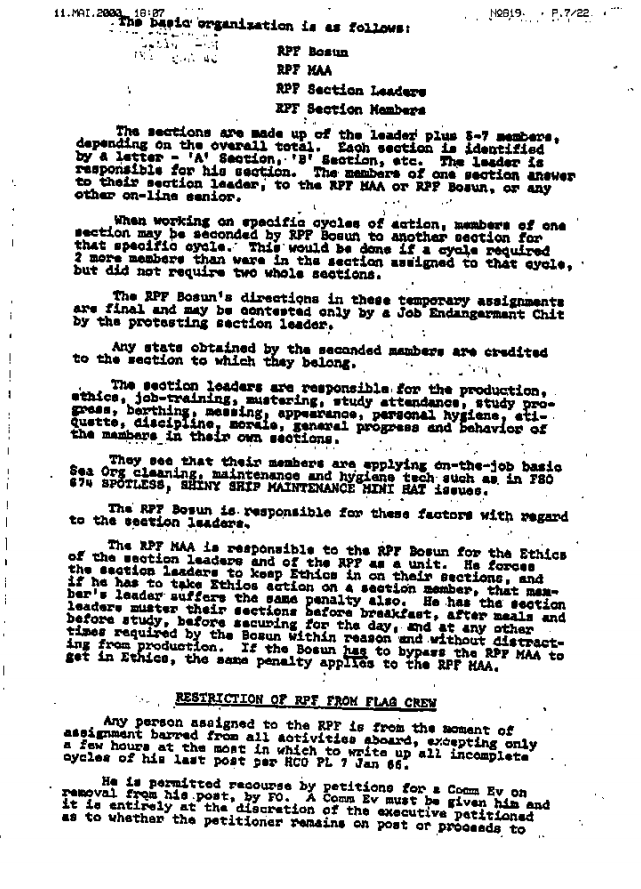 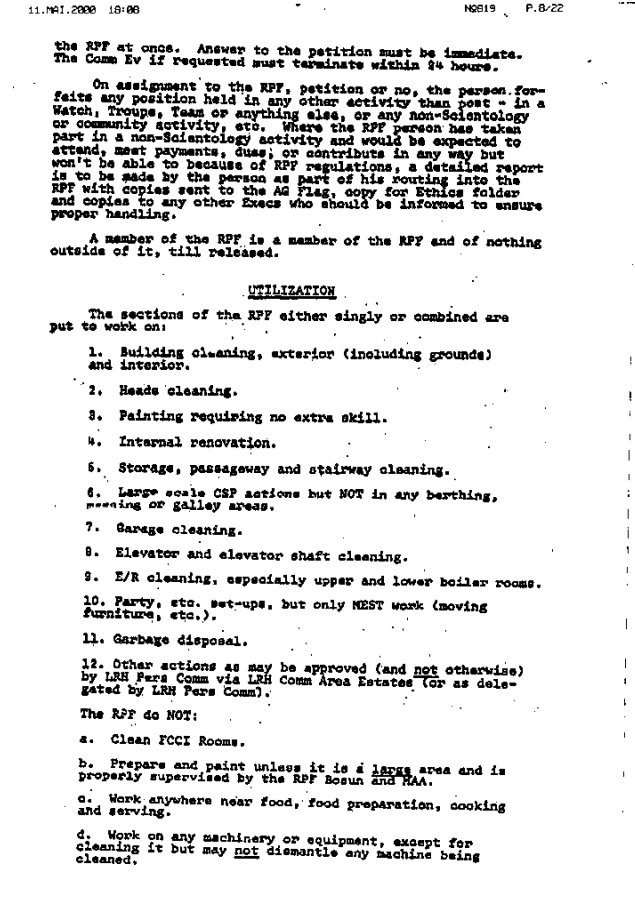 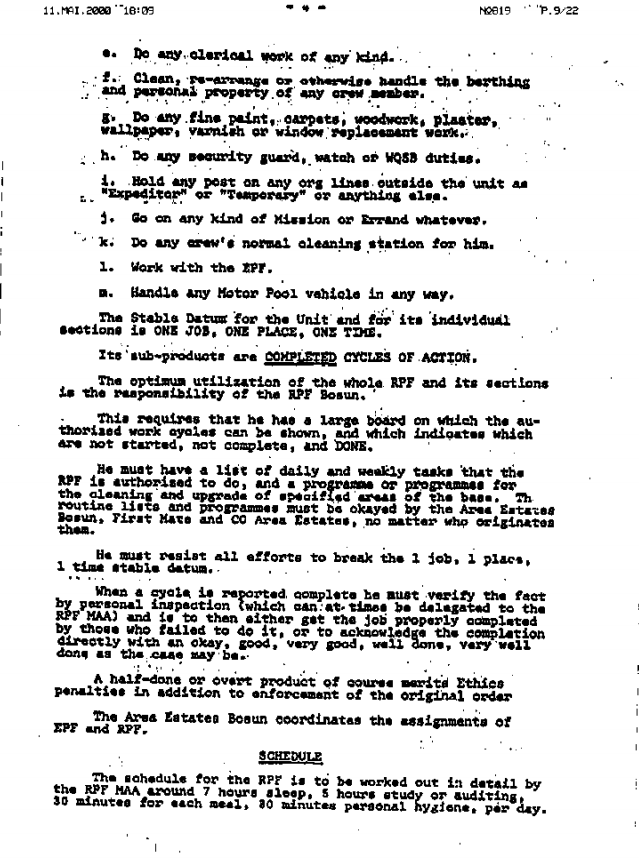 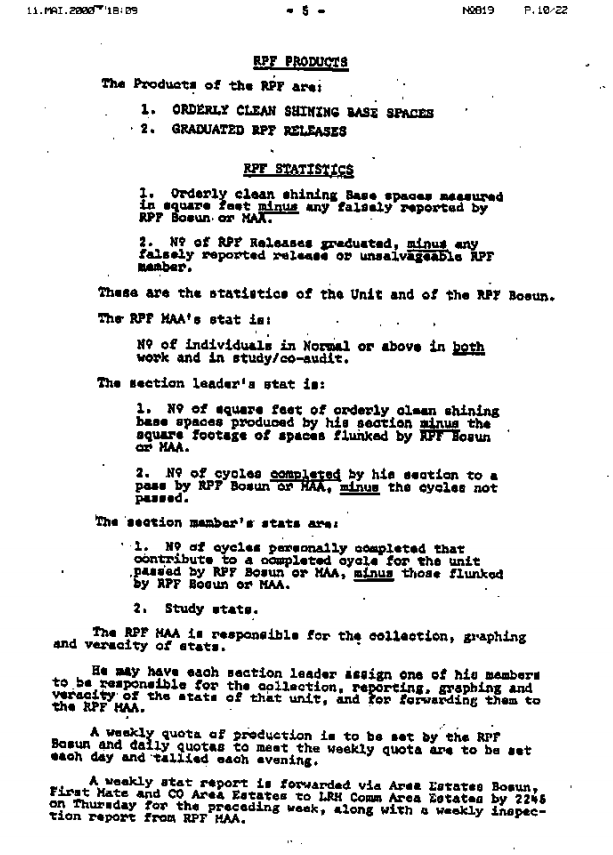 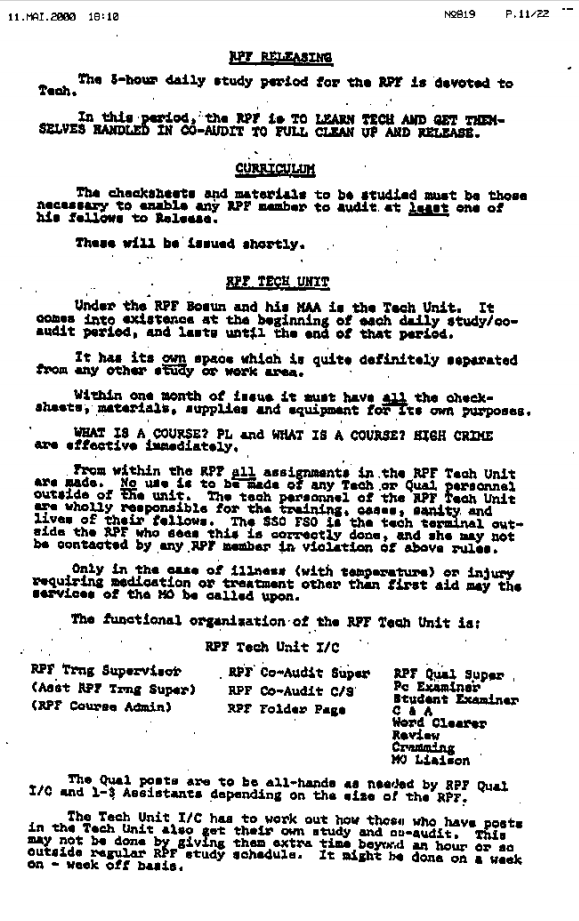 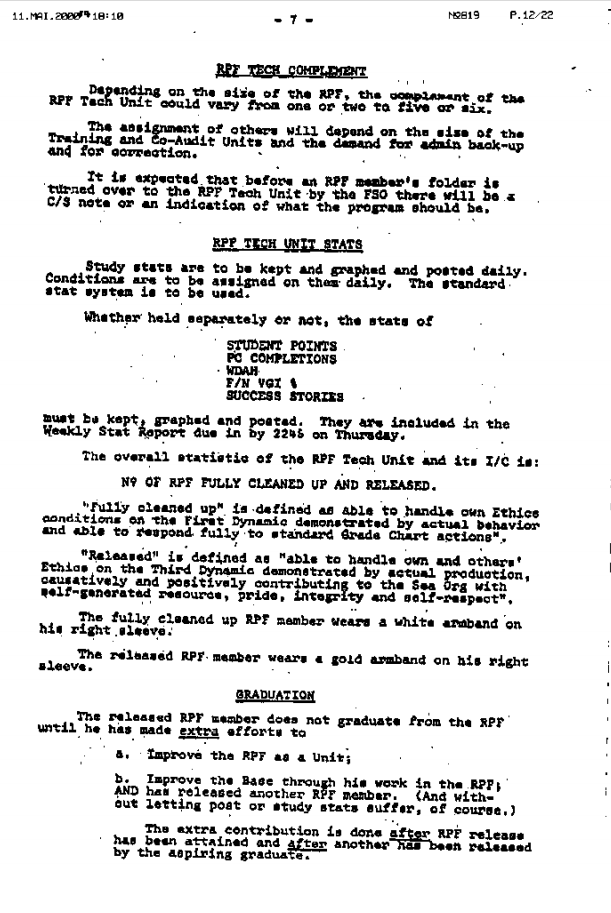 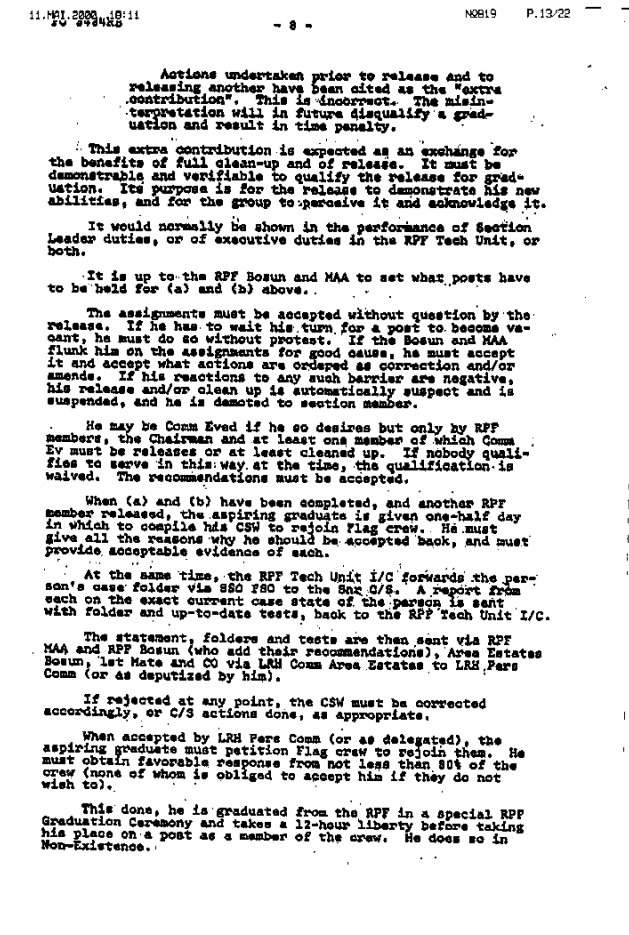 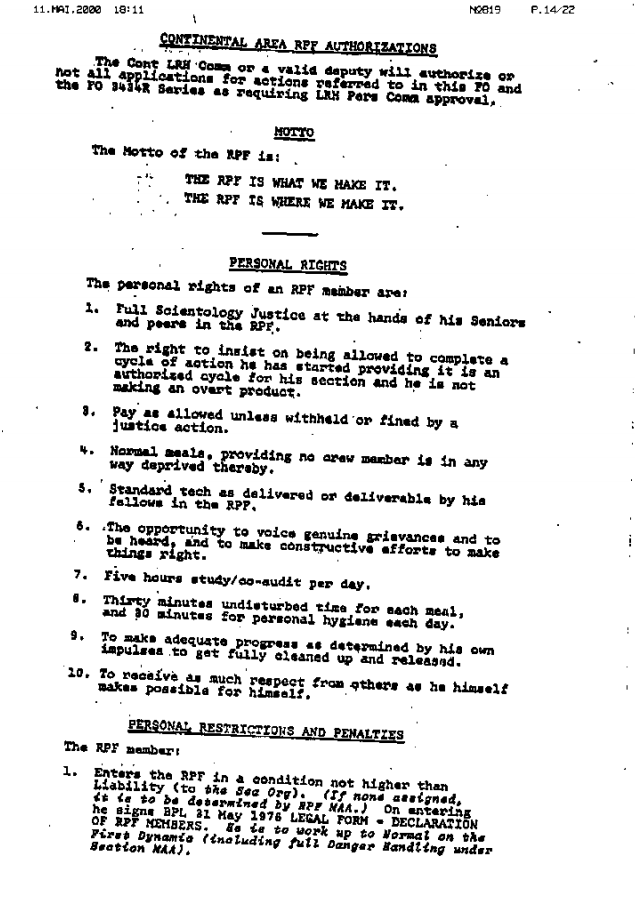 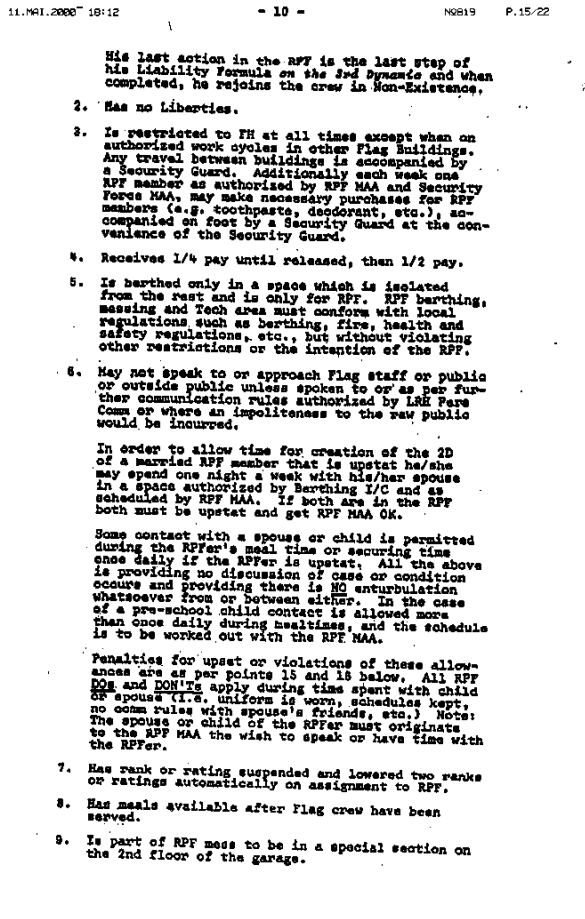 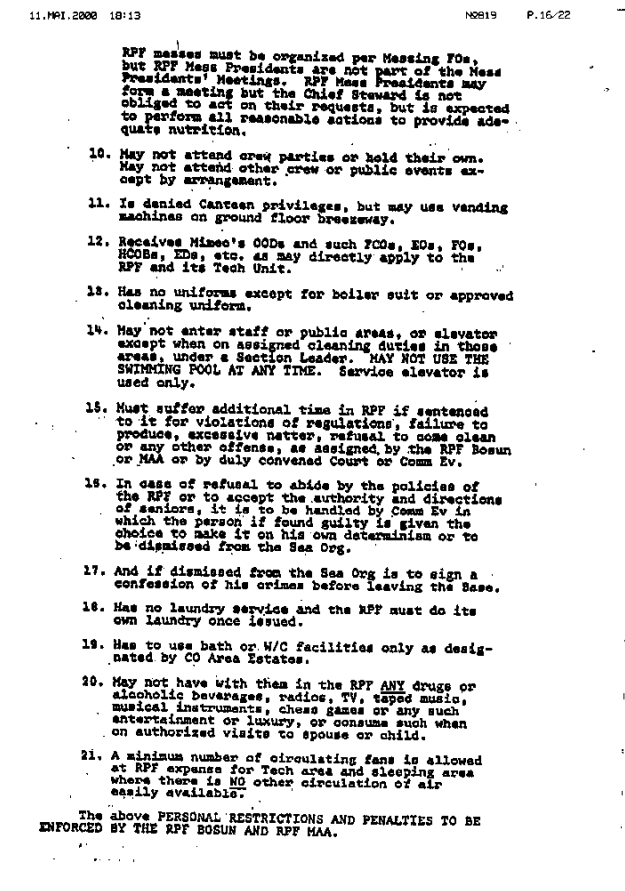 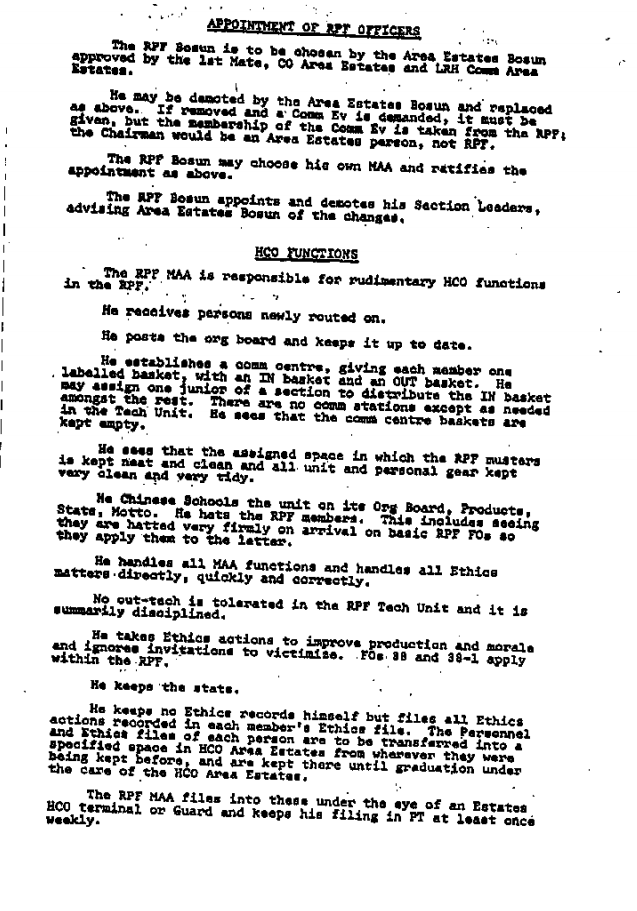 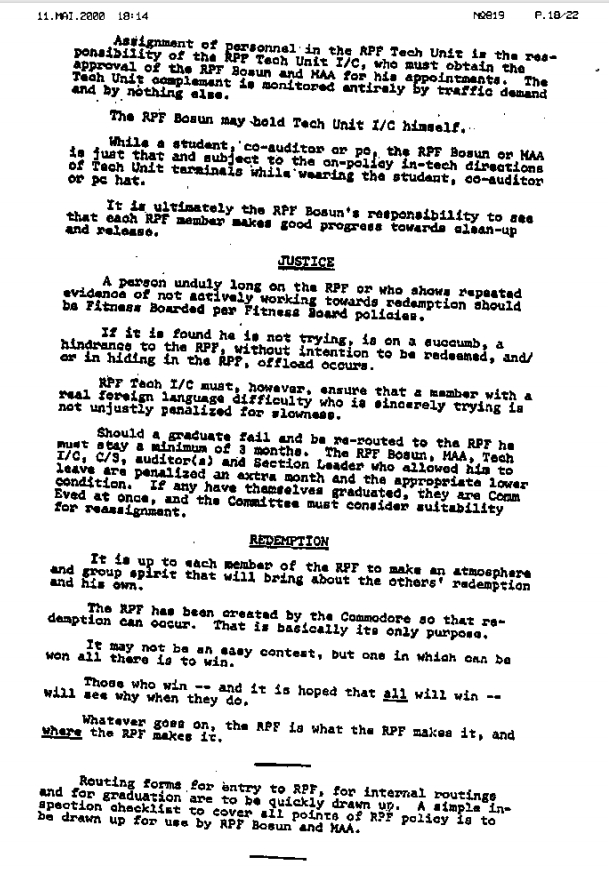 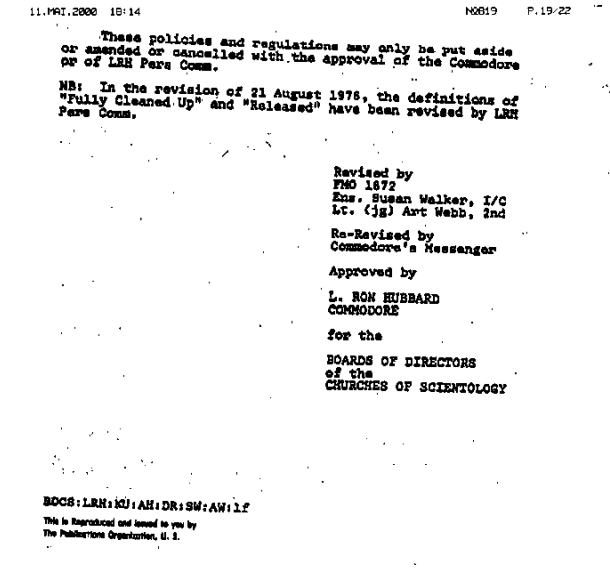 Here is the Hubbard reference that says failure to make a knowledge report makes the person just as culpable as the perpetrator of the act. This guarantees a snitch culture that is certainly prevalent in scientology. 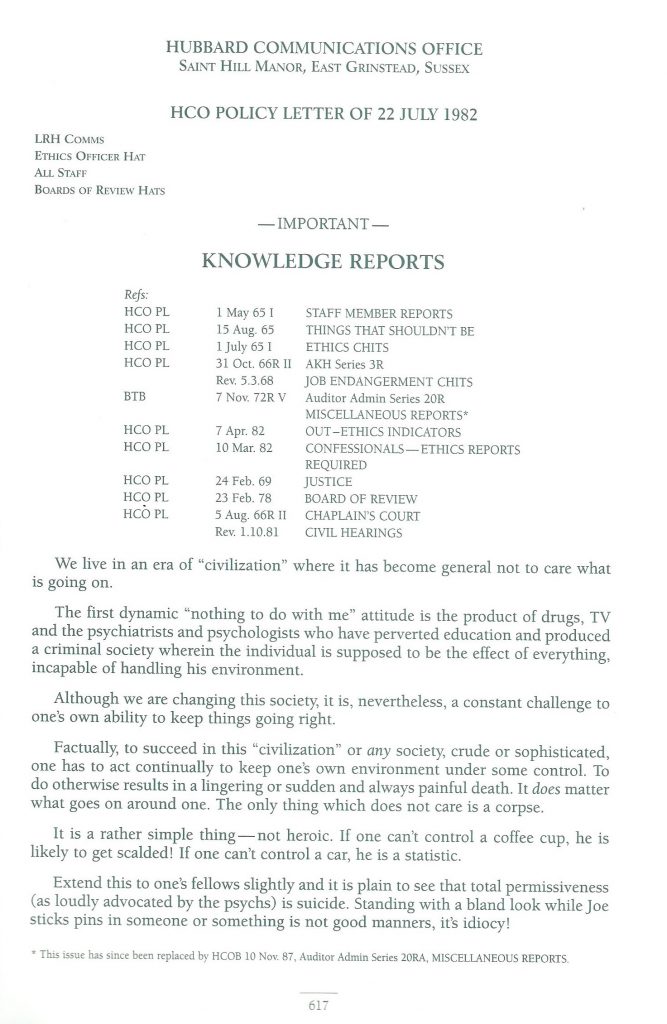 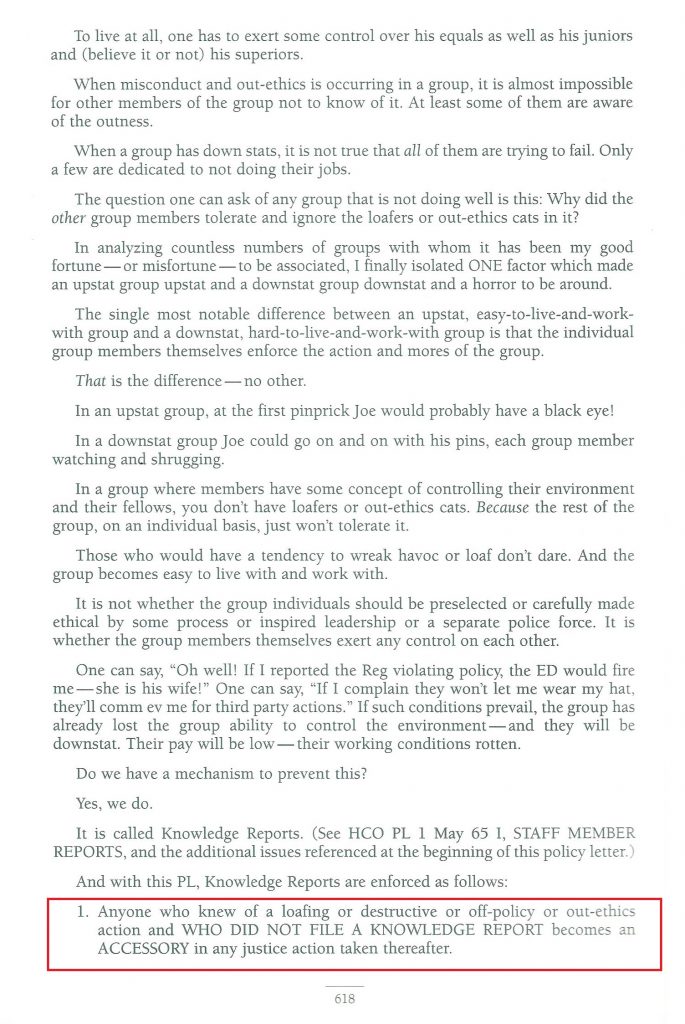 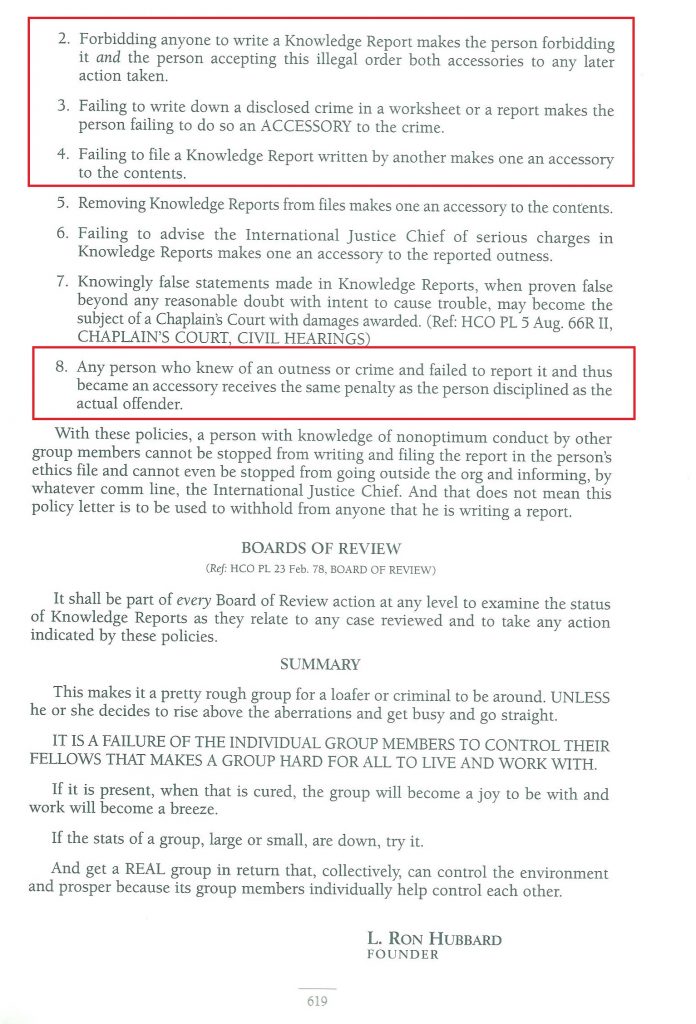 And finally, here is the first page of the Children’s Sec Check — clearly stating it can be done on children as young as 6. This is the first page — there are 3 pages of questions that go on in a similar vein. 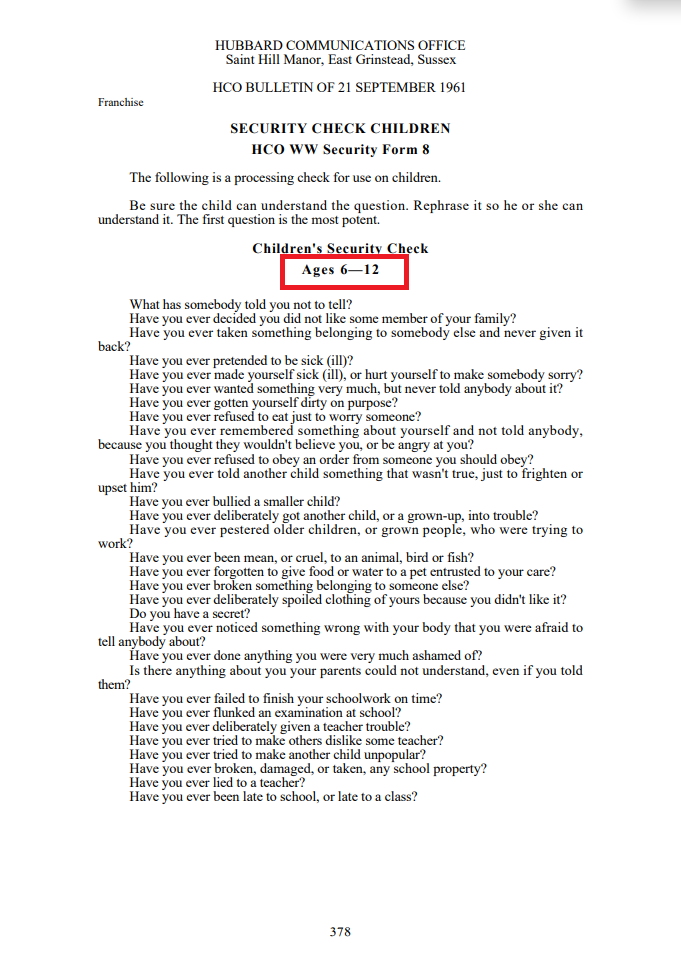