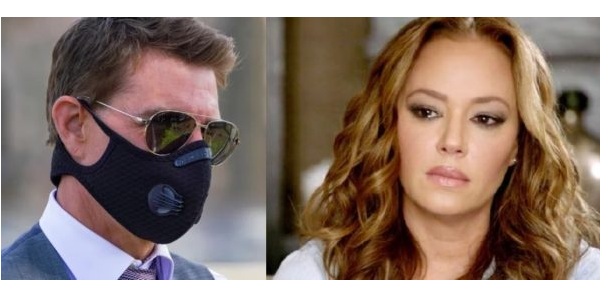 Tony Ortega posted something written by Leah to put the recent Tom Cruise rant into context. I think it is important information that should be shared as widely as possible. Perhaps there are some readers who come to this blog but don’t visit Ortega’s.

Here is Tony’s posting with Leah’s statement in full. 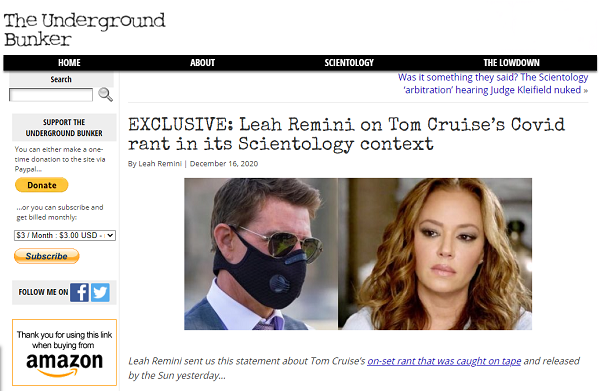 Tom Cruise claimed he does not get so much as a cold because of Scientology. All Scientologists believe that if they aren’t connected to what they label “suppressive persons” they will not get sick.

According to Scientology founder L. Ron Hubbard, “All illnesses to a greater or lesser degree stem from a PTS situation.” PTS stands for “Potential Trouble Source.”

A “PTS” is a person who is connected to a suppressive person or a suppressive group. They are so screwed up by their connection to the “SP” they have potential to be trouble to themselves and more importantly, to Scientology. When you are sick in Scientology, you are sent to the Ethics Department. You are in fact in trouble for being sick. If you have anything from a cold to cancer in Scientology it means you must be connected to an SP. You are immediately interrogated to see if you have read or seen anything that exposes Scientology, you are interrogated to see if you are connected to anyone or anything that is anti-Scientology. That could mean speaking to your own child who spoke out against the abuses he or she received in Scientology. And after they find “the why,” which is the reason for your illness, they then make you handle the situation, which means disconnecting from the person or group who they label an enemy.

But if you are highly trained and part of the elite beings of the planet like Tom is, you can “fight” the PTS-ness rubbing off. So Tom can be around a PTS for a short time without being affected too much. But you are not allowed to be PTS in Scientology or connected to someone who is PTS. You may have limited connection to the PTS if you must for public relations reasons, but Scientologists are required to cut ties with PTS people and SPs.

David Miscavige called COVID “a planetary bullbait.” Bullbaiting in Scientology is a drill where Scientologists are taught to hold perfectly still while being “baited” into a reaction. This drill is taught in one of the most basic of mandatory courses in Scientology called Success Through Communications, or “the Comm Course.” All Scientologists, including children, are required to do this course and this drill as part of their training to be Scientologists. The drill is done by two Scientologists, one is assigned to be the coach and the other assigned the student.

And then it is turned around, the student becomes the coach and then returns the favor. So the statement from leader of the Church of Scientology that COVID is a bullbait means it’s only a drill invented to make us all react, and Scientologists shouldn’t be reacting to a global pandemic but rather just going on with life as normal in their dedication to Scientology and their daily activities.

Anything you see coming from Scientology and Scientologists, such as mask wearing and supposedly humanitarian efforts, is just a show. It’s for public relations reasons only.

Tom’s reaction that was released yesterday shows his true personality. He is an abusive person. I witnessed it, I’ve been a recipient of it on a small level, and I’ve been told of similar abuse by his former girlfriend, his employees, and his friends. This is the real Tom. This was the same reaction Tom gave his household staff when they did not have the right ingredients for him to make chocolate chip cookies. This is the same type of tirade Tom launched into when an assistant had the audacity to serve him a drink in a chipped mug.

Tom does not care of the abuse that employees of the Sea Organization receive, Tom does not care that Shelly Miscavige is being held prisoner by her husband David Miscavige, Tom does not care because Tom subscribes to the abusive culture of Scientology. If you are a Scientologist and work for Tom, if you step out of line with Tom, if you want to work fewer hours to raise your children, Tom will send reports to his church on you. And reports like that end up causing an employee to pay for interrogations costing thousands of dollars. Did Tom care about his poor employees not seeing their children when they were required to work inhumane hours? Does Tom care that they did not have money for their children’s education because they were being security-checked for him? How about the Scientology assistant who asked to leave working for him to raise her family? This person was sent to Scientology for interrogations for months accusing her of having “evil undisclosed intentions towards Tom” for wanting to leave. This became so costly that she lost her home. Did Tom care about her feeding her family? Anyone who is a Scientologist who works for Tom is working for Scientology and they are sent to Scientology to be “handled” for Tom, costing that person thousands and thousands of dollars.

Tom does not care about the families of his crew; this is all for publicity. Tom does not believe in family values. I mean, how anyone is falling for this is just mindblowing. I would bet that Tom had this rant written for him and had his Scientology assistant record and release it. Hearing a rich actor with enormous power address his crew in this way is a sign of weakness and a deeply troubled person. This is not just a rant of another asshole actor. Tom Cruise pretending that he cares is why a few have called him out. They know this is a publicity stunt, they know what Tom really is and what Tom really believes. Tom believes in the destruction of family if a member decides to leave Scientology. Tom belongs to a cult that forbids victims of pedophiles to report to the police, Tom belongs to a cult that forbids victims of rape report their crimes or abuse… and if they do, his cult says their lives should be destroyed for doing so.

Tom has a history of being abusive to his inner circle, including the abuse of neglecting his own daughter, Suri.

His mental state is showing. Tom seems to think that Hollywood is incapable of making films without his help. Saying such a thing indicates the godlike figure Tom believes he is, and what he is told by Scientology. The reality is, anyone who is working in Hollywood today is working under strict COVID guidelines. Anyone who is working knows this. Tom Cruise is not dictating how films are being made, even if he seems to think so. This psychotic rant only proves what many who know Tom or have worked for Tom knows: He is an abusive dictator just as he was taught by his guru David Miscavige.

To commend this behavior only signifies that those who find this behavior normal or brave were probably abused or are abusers themselves. This is an actor with enormous power on the set of his film, this is not just a guy in the middle of a public place standing up to someone for not wearing a mask. This is Tom friggin’ Cruise wielding his power and threatening and degrading his crew.

As a producer and the lead of a film, Tom addressing his crew in this manner is a clear indication that he is used to abusing his power. He thinks this is normal behavior and, to be clear, this is “normal” behavior coming from a Scientologist. In fact, this is tame coming from a Scientologist. Abuse is not only taught in Scientology, but also commended. Hearing Tom abuse his crew while others are praising him for showing that he cares is a farce.

No one needs to be “addressed” by Tom about safety codes. There are producers who could have and should have handled the situation privately and professionally. What more likely happened was, two crew members who were in the same zone were talking to each other and Tom saw this as an opportunity to appear as the epitome of strength; of a leader who is taking this pandemic very seriously. This behavior is not normal or appropriate. No one can respond to his outburst without being fired. And again, this is not a pandemic that Tom and Scientology believe in.

In addition, Scientologists are so manipulative and abusive that they believe that this “tone” is the “winning tone” of the country right now and therefore can only help Tom’s reputation to have this leaked.

Imagine if this were a woman. She would be called a lunatic.

On a movie set there are COVID officers who monitor mask wearing. Crews are separated into groups and zones and are not allowed to step into zones they are not assigned to. The camera crew is in its own zones, and they are only allowed to be with each other. The wardrobe department is in their own zones and must eat together. They cannot mix in other zones, they must wear wrist bands that show what zones they are. The set is taped off to show where the zones are, and people know not to walk in a zone they don’t belong in. All cast and crew are tested every other day, temperatures are taken every day upon arrival to set, new masks are given upon their arrival, anyone from out of town must stay in their hotels and are monitored, they are driven to set from those in their zones. They are not being monitored by Tom Cruise; they are being monitored by the COVID officers assigned to the movie. There are strict guidelines that are being required to be on set.

So, my short answer to how I feel about yet another one of Tom’s psychotic rants being exposed? I am getting “small dick energy” from Tom and men like him.

And I only wish someone had stepped in and had done something about it. We have enough of the types who stand by and allow this kind of behavior to go on.