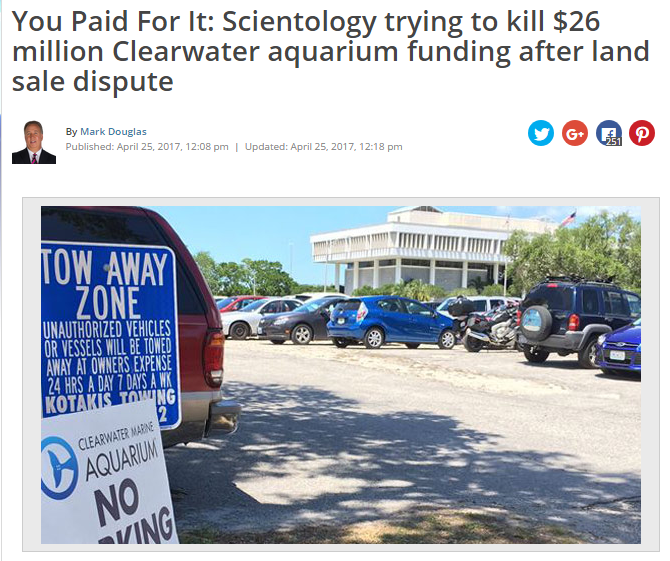 The Tampa NBC affiliate website covers the latest news in the Scientology v. Clearwater war of 2017.

Here is how the article begins:

CLEARWATER, Fla. (WFLA) — The Church of Scientology has declared an economic war on Clearwater Marine Aquarium and the stakes are high — $26 million in tourism tax funding that the church wants to block at Tuesday’s Pinellas County Commission meeting.

The church’s anger stems from a land purchase dispute involving a dirt parking lot next to Clearwater City Hall. The aquarium recently defied the church by selling that land to the City of Clearwater on April 20 for $4.25 million and rejecting Scientology’s $15 million offer.

City of Clearwater leaders want to develop the 1.4 acre parcel as part of its $50 million Imagine Clearwater plan to pump new life and commerce into the city’s downtown waterfront. The church wanted to buy the empty lot on the corner of Pierce St. and Osceola Ave. in order to build a pool and playground area for its Oak Cove religious retreat located next door. The church insists it is a critical element to its self-funded downtown development plan.

It did not take long for the smiling, glad-handing, magnanimous Miscavige to revert to form as the bully throwing a hissy fit because the minions did not kowtow and give in to his every wish.

When Miscavige goes all hissy, Muffins Yingling soon appears. Sure enough, she chimed in:

The 7-page letter goes on to allege the aquarium is swimming in money due to the popularity of Winter the Dolphin and pays its CEO David Yates an exorbitant salary compared to other aquarium managers across the nation.

I wish they had attached the letter to their story. I bet it is a doozie.

It is certainly vicious sour grapes ranting of Miscavige, tidied up by Muffins into more presentable english.

Scientology is really complaining about the use of TAXPAYER funds?  Recognizing irony is not the strong suit of scientology.

Everyone EXCEPT scientology remembers it is subsidized with taxpayer funds — WAY more than the $26 million they are now complaining about. They claim it is their RIGHT to not pay taxes and be subsidized. Whether you agree or disagree, the fact remains that all the NON-TAXABLE properties in Clearwater owned by scientology have their public services paid for by Clearwater’s taxpayers.

And a “bed tax” is a tax on TOURISTS coming to Clearwater and staying in hotels. Certainly scientology is NOT attracting tourists to Clearwater, in fact, many people choose to go elsewhere BECAUSE of the church.

And whether you agree or disagree with David Yates’ salary (seems high to me at $500Gs a year), there is one person who should NOT be throwing stones out of his opaque-windowed glasshouse: David Miscavige. The reason he even knows how much Mr. Yates earns is because the Aquarium, unlike scientology, is totally transparent with its finances. When scientology and Miscavige disclose his income (including the fair market value of the slave labor that serve him hand and foot, the church vehicles he is provided, the housing he is provided, the food, bespoke suits, handmade shoes and private just travel) then they might have grounds to complain. Then again, if that WAS public, they would not dare complain about a mere half a million bucks…

And it goes on to report that somehow scientology has managed to co-opt another USF professor to champion their cause.

Yingling cites USF Economics Professor Philip Porter:  “Because the study is biased and self-serving, its claims offer no good basis for decision-making and should be ignored.”

It’s the old adage, if you have the money you can get an “expert” to offer an opinion to support you. Apparently this professor has stated that the Aquarium is grossly overstating their economic impact on the community. This is really rich.  I wrote about the earlier FSU “Economic Impact Study” commissioned by scientology (Scientology Takes Clearwater for Suckers) because the ENTIRE study was based on “facts” provided by scientology. Here are a few quotes from that blog post:

Maybe if someone (other than scientology) paid Prof Porter he would savage the study done by FSU for scientology?

It is amazing to watch this unfold. Miscavige is being exposed to the world for what he really is. And finally, instead of just getting away with it because nobody dare incur his wrath, the mainstream media is shouting “the emperor has no clothes.”

And of course, scientology spokesman “Ben Shaw” (reading a statement written by David Miscavige who doesn’t want to be attributed in the press) is quoted as follows:

“Its not over yet,” and vowed to continue opposing public financial support of the aquarium as a bad deal for taxpayers.

Think about how much taxpayer subsidized money scientology is now going to waste on lawyers and opposition to this.