There are those who have left the Sea Org who were once privy to events in the world of David Miscavige. Many of them were in The Hole at one time or another. Rather than speaking out about the abuses they witnessed or experience, they have chosen to remain silent. A number of them have taken advantage of their previous status to make money with or through scientologists. Some of them took healthy payouts. Probably more than the $50,000 that was handed to Debbie Cook -- though scientology then sued her for her supposed breach of that agreement and had their asses handed to them in a … END_OF_DOCUMENT_TOKEN_TO_BE_REPLACED 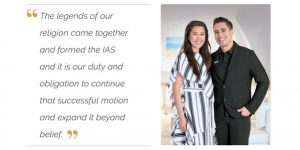 This new propaganda piece raises an important question. Where ARE those "legends of scientology"? It is true that many of the "leading lights" of scientology at the time signed this pledge. Though the real story of the IAS is a very different one than the revised history scientology tries to make it out to be. This "pledge signing" was merely a PR stunt -- the IAS had been formed by a Danish lawyer as a means of keeping money outside the purview of the IRS. It was a "bright idea" to form an "association" which was a uniquely European thing and to divert all funds from orgs outside the US … END_OF_DOCUMENT_TOKEN_TO_BE_REPLACED