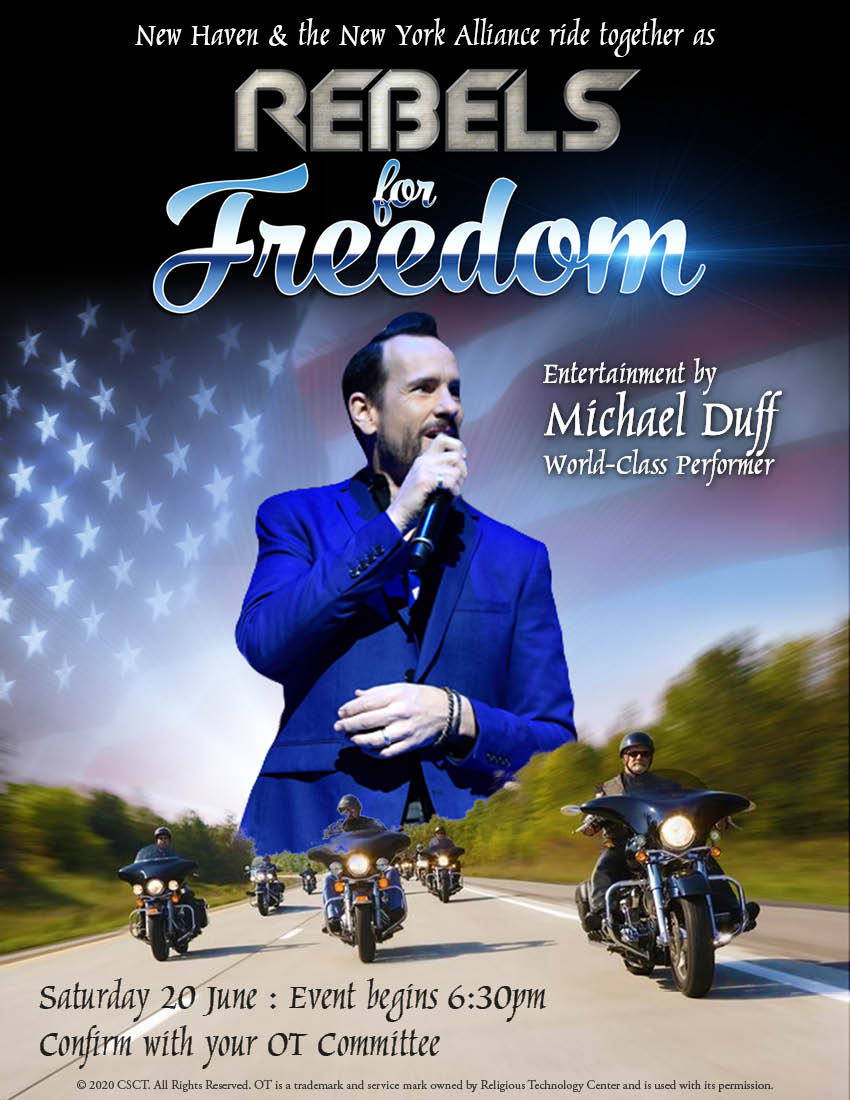 The “Rebels for Freedom” are “riding” — virtually!

You must watch the video — it shows a bunch of unknown bikers rolling down the highway to Steppenwolf ‘s”Born to be wild” and then cuts to various stills of old scientology-people in sunglasses trying to look tough/cool. Like they are bikers…

It says there will be “Breaking news” from the Landlord Office that will “massively accelerate” the ideal org in New Haven.

I can easily translate this: if you give more money, we will “accelerate” the New Haven “ideal org.” But “acceleration” of this ideal org is an oxymoron.

Way back in 2003, New Haven was one of the first locations to purchase a new “ideal org” building. It has sat empty since then.

These are quotes from an article in the Yale Daily News from December 2019. It is a lengthy piece detailing the history of the building and scientology in New Haven (bolding is mine). As a note, Elm City is the local nickname for New Haven.

Ironically, the article concludes by talking about a November 2019 biker oriented fundraiser they dubbed “rebels with a cause.” As with everything in scientology, it’s deja vu all over again…

Since 2003, Scientology has owned the much larger three-story structure across the street at 949 Whalley Ave., where they plan to move. The 949 property opened as a Masonic temple in 1930.

Since the building’s sale to the Church, the property has remained vacant, blighted and tax-exempt.

At the time of the building’s sale for $1.5 million in 2003, the project was shovel-ready. Building permits were filed, blueprints were submitted and Westville anticipated an Ideal Org on its doorstep. Scientology contracted construction firm Foit-Albert Associates to begin work on the site in 2004, according to emails between Foit-Albert and city inspectors. Project manager Gwen Howard wrote New Haven Building Inspector Daniel O’Neill for a preliminary review of the renovations. In her email, Howard included plans for a site that would accommodate up to 1,000 people. The firm’s blueprints for the 18,000-square feet building imagined cavernous course rooms and a massive auditorium.

The Church filed a building permit to work on the building’s interior framing on April 15, 2004, which estimated $150,000 in construction costs. From then on, no substantive renovations have taken place according to city officials. The 2004 permit was voided by the city in 2009.

On Aug. 16, 2010, the City of New Haven filed civil action against the Church of Scientology with the objective of foreclosing the 949 property and taking possession of it.

In its appeal process, the Church of Scientology of Connecticut submitted invoices from contractors it had hired for roof repairs in 2014 and asbestos removal in 2016 as evidence for tax-exempt status. The Church also included 8-by-10 inch photos of fundraisers for the Ideal Org, depicting a group of exuberant parishioners participating in auctions on Scientology holidays such as “Auditors Day 2017.”

In an interview, Chairman of the Board of Assessment Appeals Jeffrey Granoff said that he could not recall any interactions with the Church of Scientology and did not remember approving the appeal. Nonetheless, city records show that Granoff approved the Church’s appeal in March 2018. This renewed the Church’s tax-exempt status until 2021.

In an effort to combat urban blight and promote “safer, healthier and more attractive communities,” the City of New Haven launched the Livable City Initiative. The LCI monitors neighborhood concerns regarding superficial infractions like overgrown grass, as well as more interpersonal conflicts. In October 2017, the LCI cited Scientology for violating the Elm City’s Anti-Blight and Property Maintenance Ordinance. LCI inspector Jillian Driscoll’s report noted “unreasonable interference,” commenting that “neighbors are continuously reporting [the] building as a nuisance in the neighborhood.” The report also critiqued the “temporary windows and doors,” demanding that the blighted ones in place be replaced with new materials. As for the landscaping, the report said it needed “major work,” citing overgrown vegetation and unmaintained tree belts.

Still, the New Haven branch remains unconcerned. The Church continues to host fundraising events regularly. On Nov. 2, 2019, the Church solicited donations from members at a fundraising event held at the Whitneyville Cultural Commons in Hamden with Harley-Davidson-esque iconography. The fundraiser’s slogan: “Rebels with a cause.”

A couple of final notes.

Scientology could simply pay for the renovations and be done with this train-wreck. They have mountains of tax free cash. If they really believe in “ideal orgs” they would have done so long ago as that would be the only way they could “Clear this community” — but they don’t care about that. They only care about using this to continue to make money. 17 years if fundraising is more cash than an Ideal org being open during that time and they don’t have to provide any service to boot. All those students who have passed through Yale in the last 17 years could have been Cleared. Hell, scientology could have captured future politicians, judges, whales and other assorted bigwigs. But this is just not what the “ideal org” program is all about. It has nothing to do with “clearing” and everything to do with fundraising.

You can bet Steppenwolf would not be enthused about this music being used to promote scientology. And you can bet scientology paid no licensing fee for the music — but look out anyone who uses anything scientology owns without paying their licensing fees! And speaking of music; how is Michael Duff a “World-class performer”? What is the definition of world-class they are using?

How do you do a motorcycle ride on Zoom? Make a bunch of zoom-zoom noises?