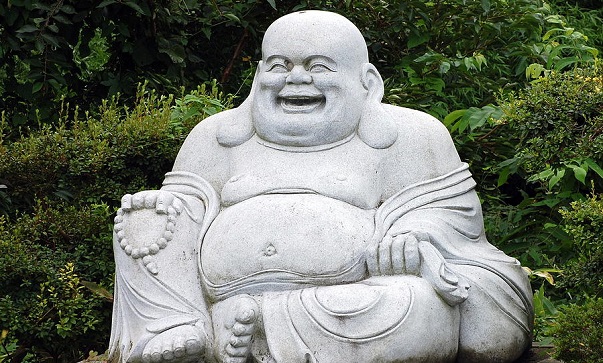 These items get goofier by the week. 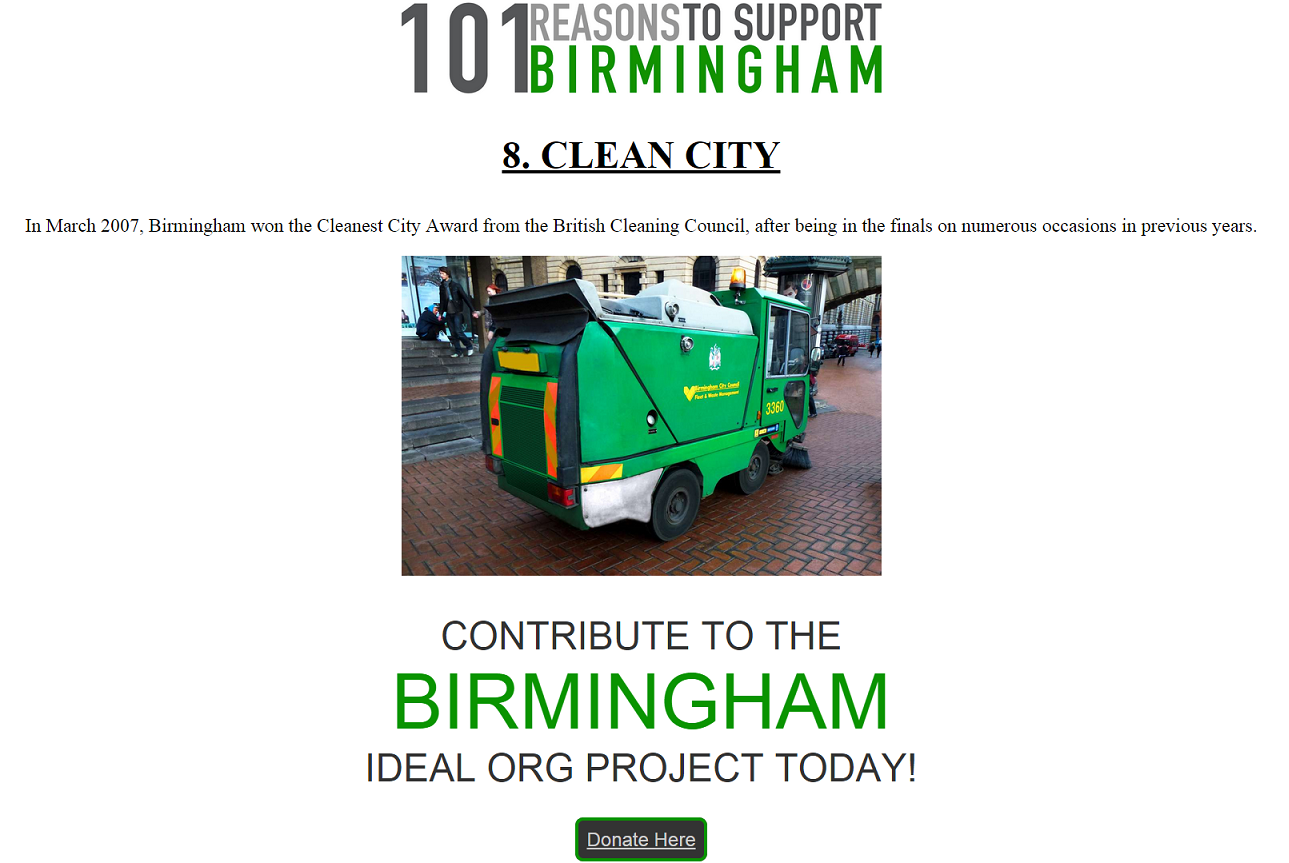 One of the top conference destinations…

Some Brummy truth in advertising

What do you get? A totally empty room just like the other “ideal orgs.” Finally, some truth in advertising. 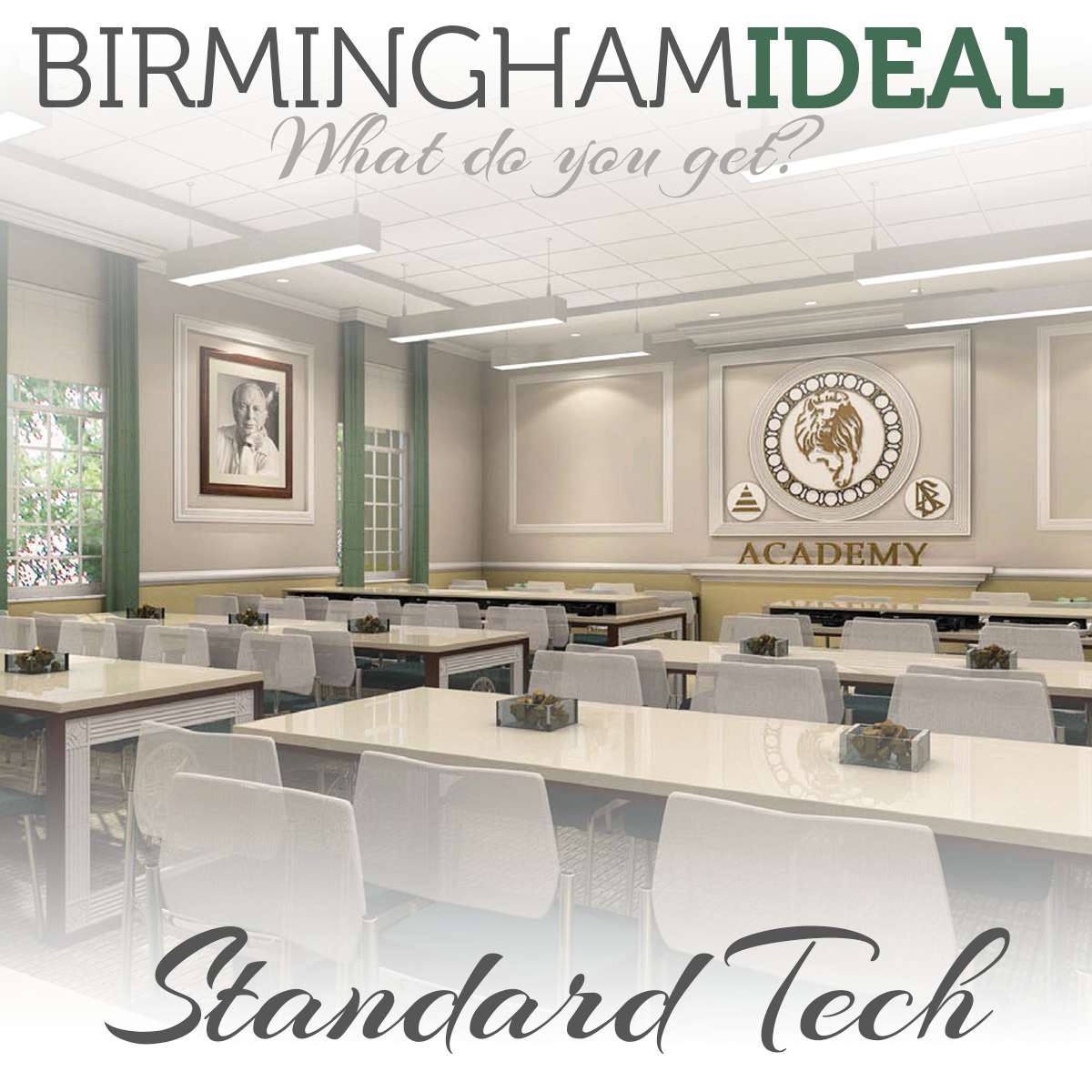 The Way To Happy Hype

He ran in Pam Springs and Elvis had a house there once. Wow. Good reason to give us money….

Dear Matt,
Running by Elvis’ house in 112 degree heat.
John Radich is a name that any ultramarathoner knows. He runs races 50 miles or more and has for many many many years. He’s logged over 100,000 miles in support of humanitarian projects, including running across the United States coast to coast.
John is a veteran and this will be his 14th BADWATER Race raising funds for youth projects using the common sense found in The Way to Happiness®book.
Take a moment to be in the ‘heat’ with John as he trains.
“Recently, I was heat training in Palm Springs. Temperatures were 112degrees, making for good training for Badwater!  Palm Springs is known for it’s affluent neighborhoods. Movie stars such as Elvis, Frank Sinatra & Bob Hope all had homes in Palm Springs.   As I run away from the city limits into the wide open Mohave desert, I actually run past the home of Elvis!Loaded with 25 copies of The Way to Happiness,  I hand them out along my route, letting people know I’m training for Badwater and helping kids make good choices. The responses are always very uplifting.A homeless person stopped me, his foot was heavily bandaged, weathered from the elements. He noticed me handing out The Way to Happiness and wanted a copy and our Badwater Brochure.   He was very impressed that I was running in the heat and knew of the Badwater ultra race. He wanted me to sign a booklet both for himself and for his friend, which I did of course!
His words of appreciation were so sincere, calling me a celebrity and hero for youth (ahh– not sure how to accept that!!!    Very flattering.)
He then insisted I take his unopened bottle of Gatorade with me. I politely declined, knowing he needed it more than I but he insisted I take his Gatorade.
In his words, “I don’t want you dehydrated out there and you’re training for a great purpose!
”This experience really moved me and added more fuel to my purpose — the power and goodwill you create with The Way to Happiness!”
Striding on, John Radich
Support John’s humanitarian projects
Sincerely,
Caralyn Percy
President
The Way to Happiness
Foundation International

Last I knew he had blown the Sea Org for the 3rd time and was recovering from a heart condition in Canada — he went back there because they have free healthcare. Wonder what his “stories about LRH” will entail? 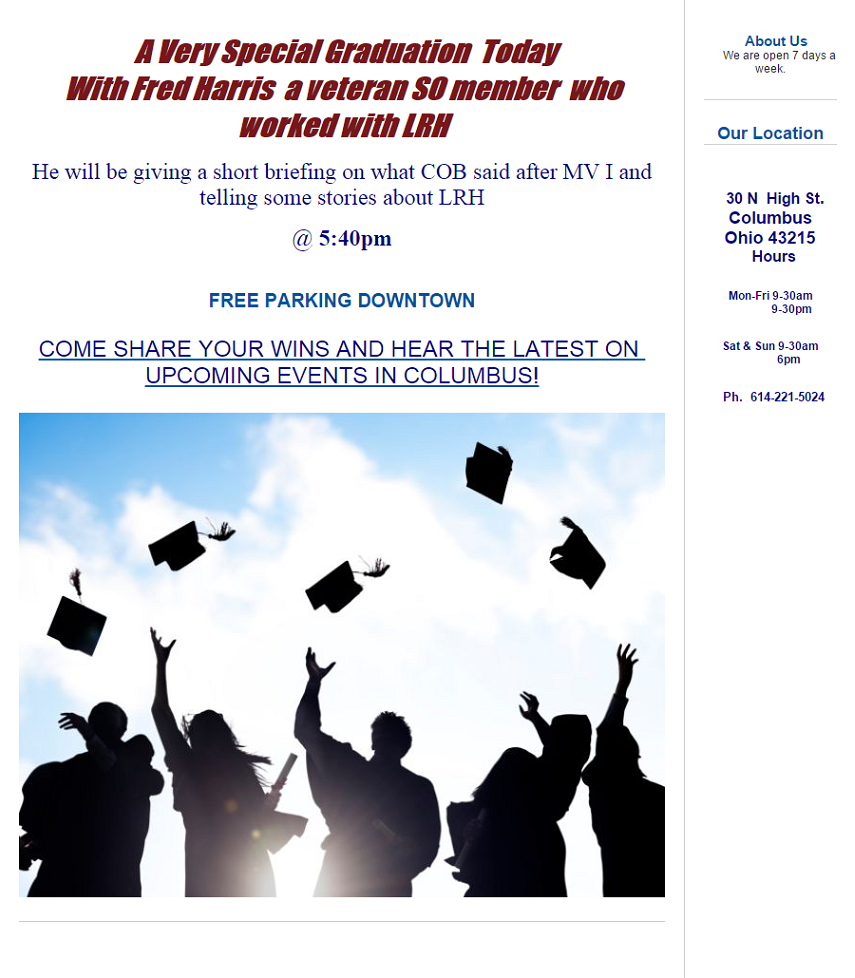 Harvey “Hanging On By A Thread” Jacques

Harv is dishing out commendations to try and get his stats up…. 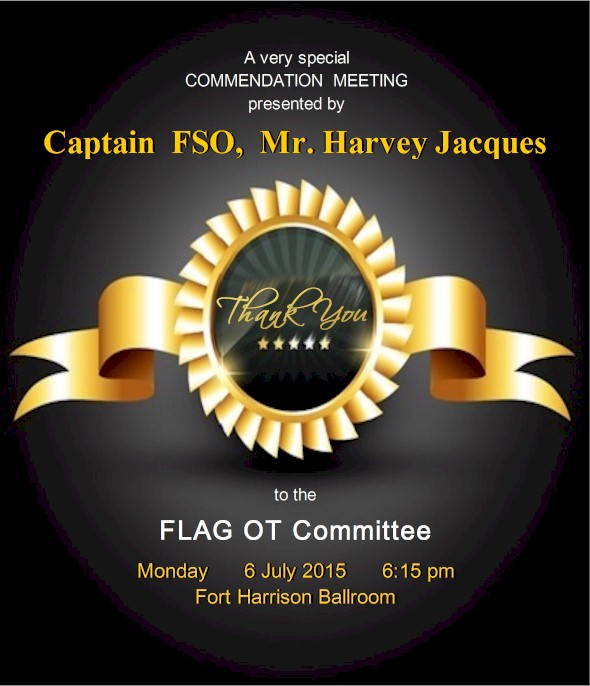 He Who Shall Not Be Named

HE is “coming back in town”.
Hold onto your wallets. Don’t let any credit cards out of your sight. Look out for PI’s snooping through your garbage and hacking your emails.
HE is in town…
OMG, it’s soooo amazing I can feel the tone level rising across the entire city.

You heard at last Friday’s event, SOMEONE is coming back in town…

It is also the 3rd Maiden Voyage event, where we gather in the name of the IAS and guaranteeing Mankind’s freedom.

You are going to hear the news of our latest accomplishments toward planetary salvage, from the forgotten corners of the globe to the greatest cities on Earth, plus other very exciting news!

I am taking note of all OTC members that are attending, which I am sure is every single one of you, but I would like an email back to reconfirm it.

We have A/C and snacks

And like EVERY other “ideal” org, we have backlogged filing.
Amazing administrative skill…. 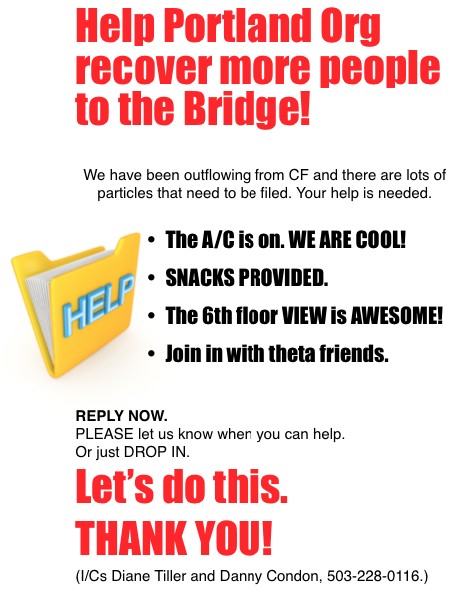 Looks pretty creepy. But why do they have a picture of St Hill when the event is in London? 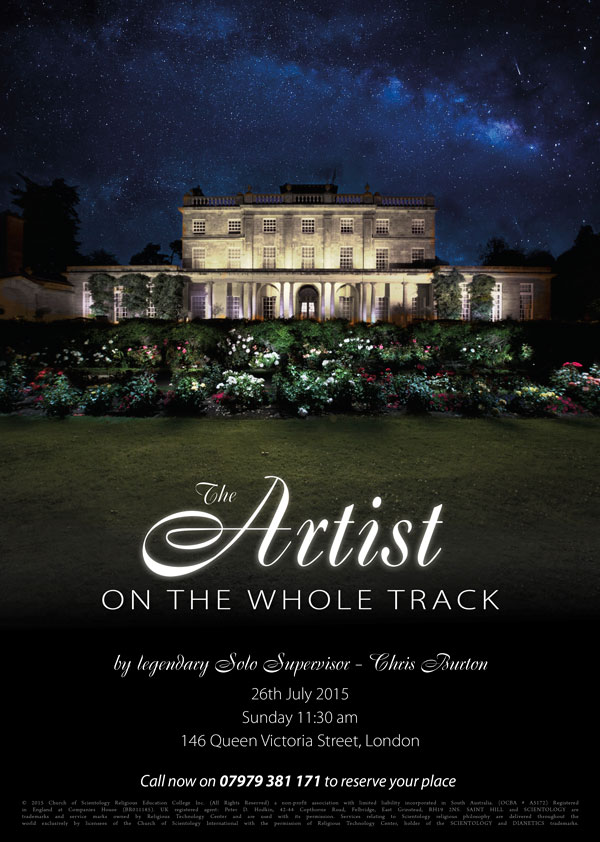 It would not be Thursday without at least one Moneywinds “make more money and give it all to us” seminar with D/COB for promotional pictures. 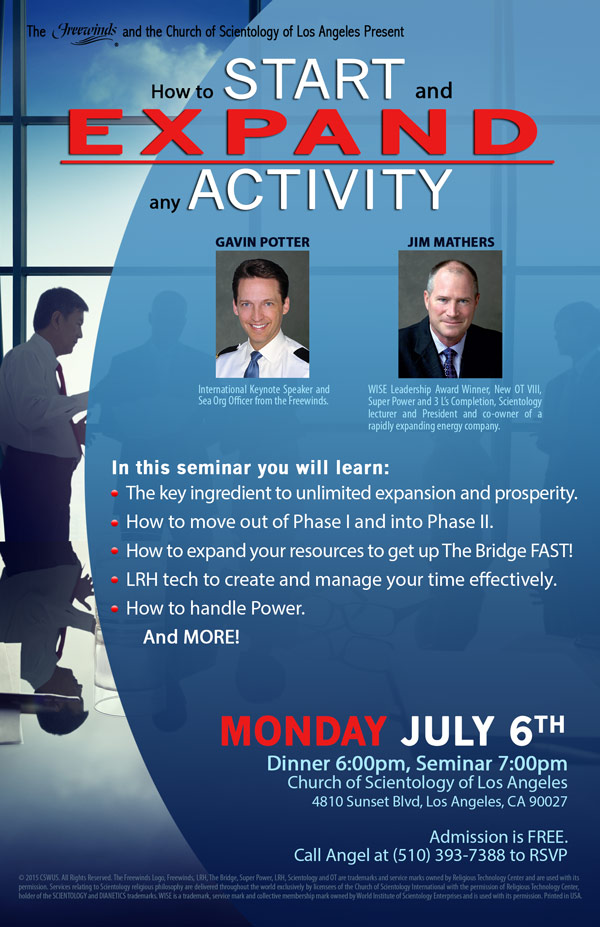 What do you get?

Seems to be a bit of a theme.
“A true perspective of scientology”…
An empty building. 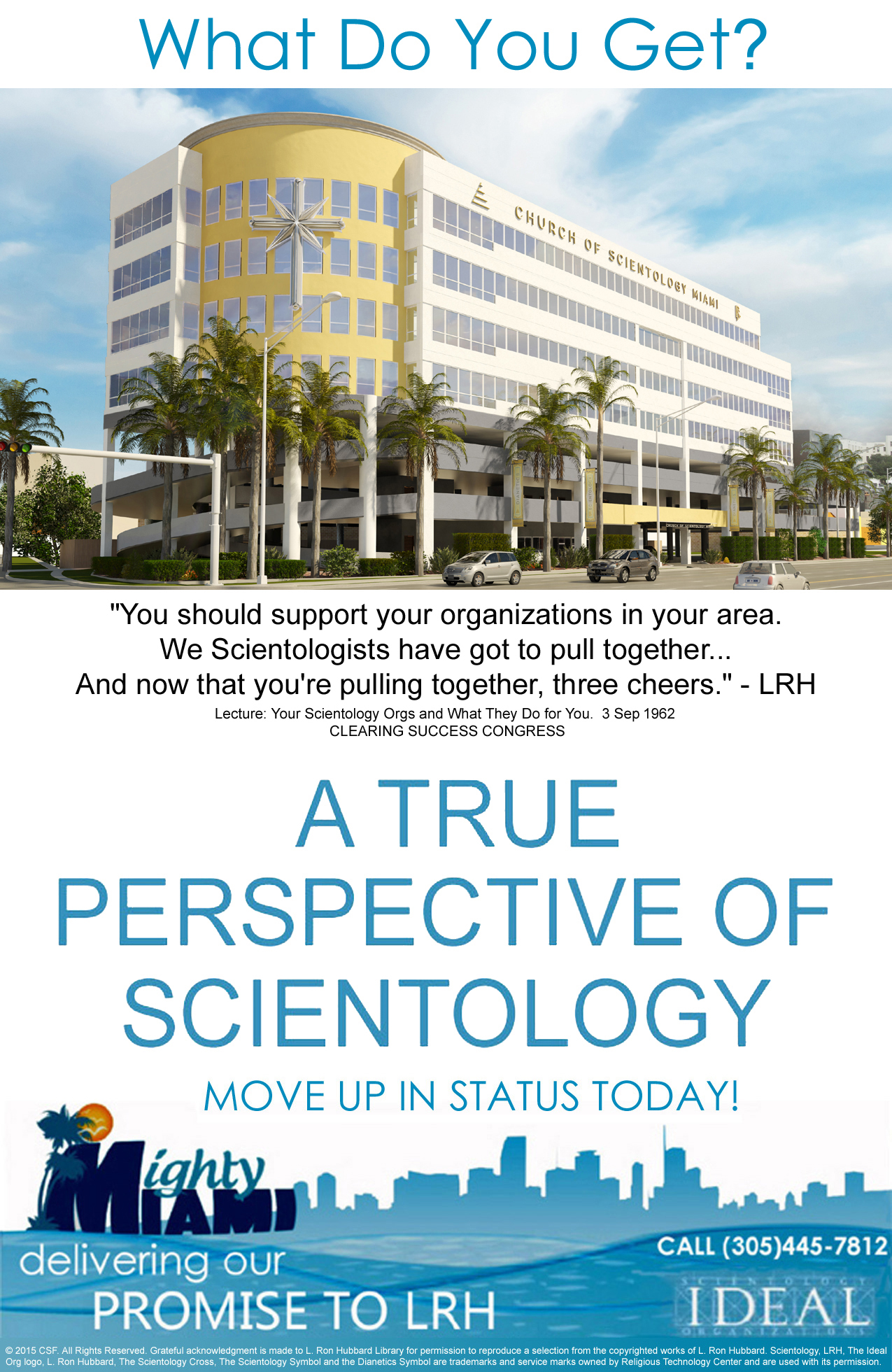 But now they are auctioning pies? In the “name of the IAS”? Gee gosh willikers. These guys are playing for blood you betcha. 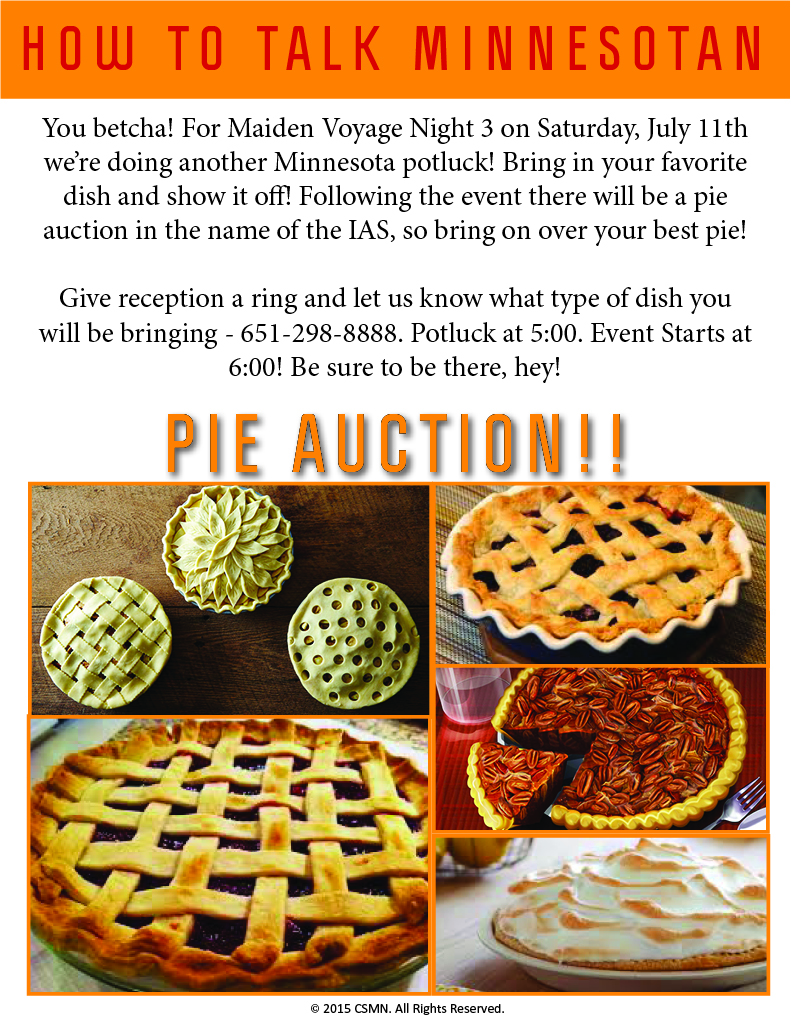 Who would show up for a 45 min video about burying re-re-redone steel plates in earthquake zones unless they were serving up some BBQ.
The only question is what version of the materials they are doing now. Especially as there are NO OEC or Tech Vols…. No Briefing Course… No KTL…

We are reaching the stratosphere…

I was hoarse from screaming
Out of the park event.
Blah blah de blah blah blah 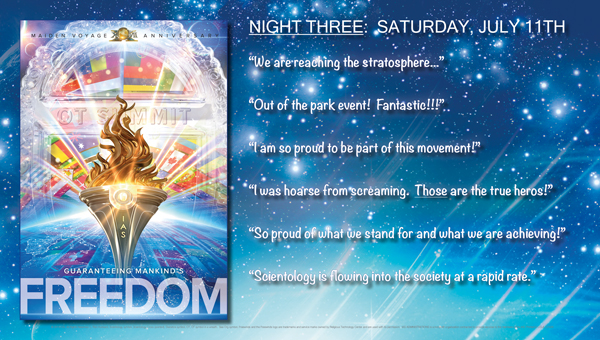 Ensuring mankind has a future

They apparently don’t even realize how conceited they sound.
Sounds like a guy with a tomato plant in his back yard announcing he is “ensuring mankind is fed.” 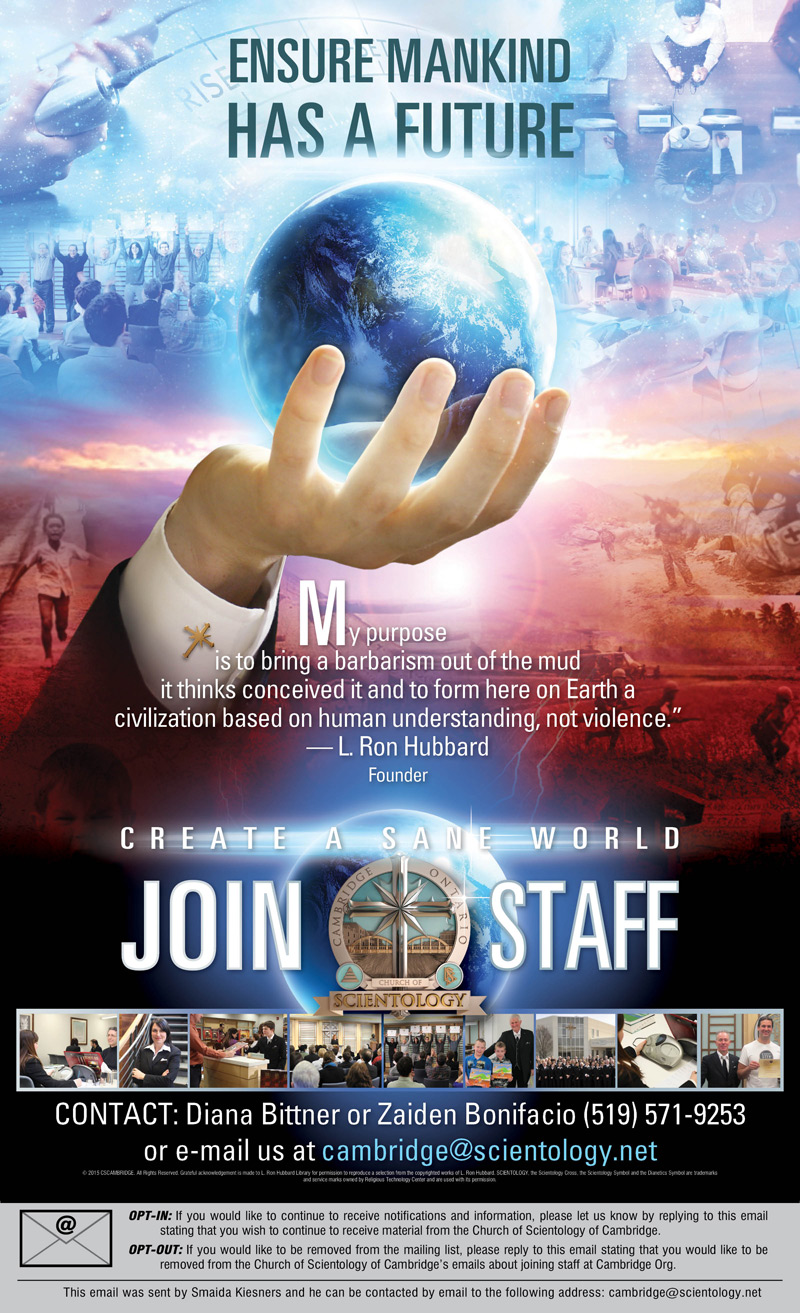 Prices Slashed. Everything Must Go!

Wait a few more weeks, they will offer to pay you to go so they have some fresh meat for all the vultures that call the Moneywinds home. 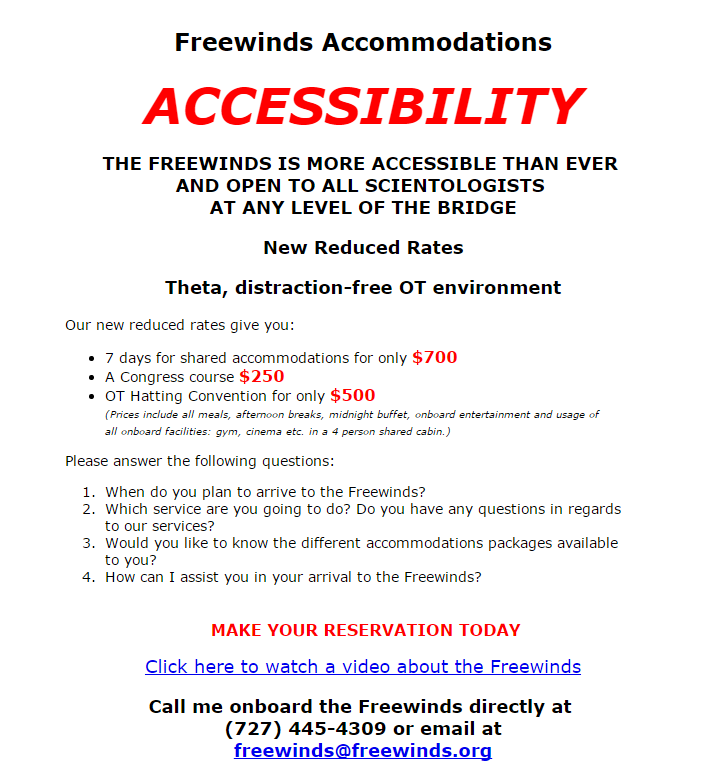 Maybe you could get Tom Cruise to climb on your bandwagon? He is a Big Being. 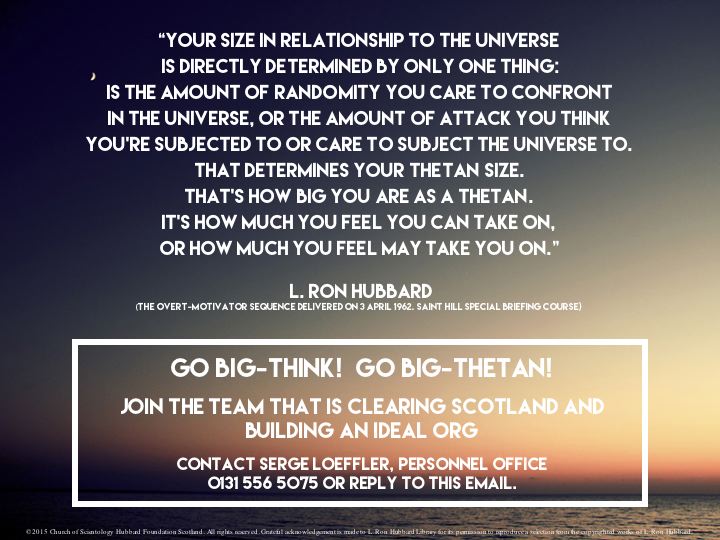 Why I did it…
And then no name, no statement and a random LRH quote?
More appropriate question: why did anyone waste their time putting this out? 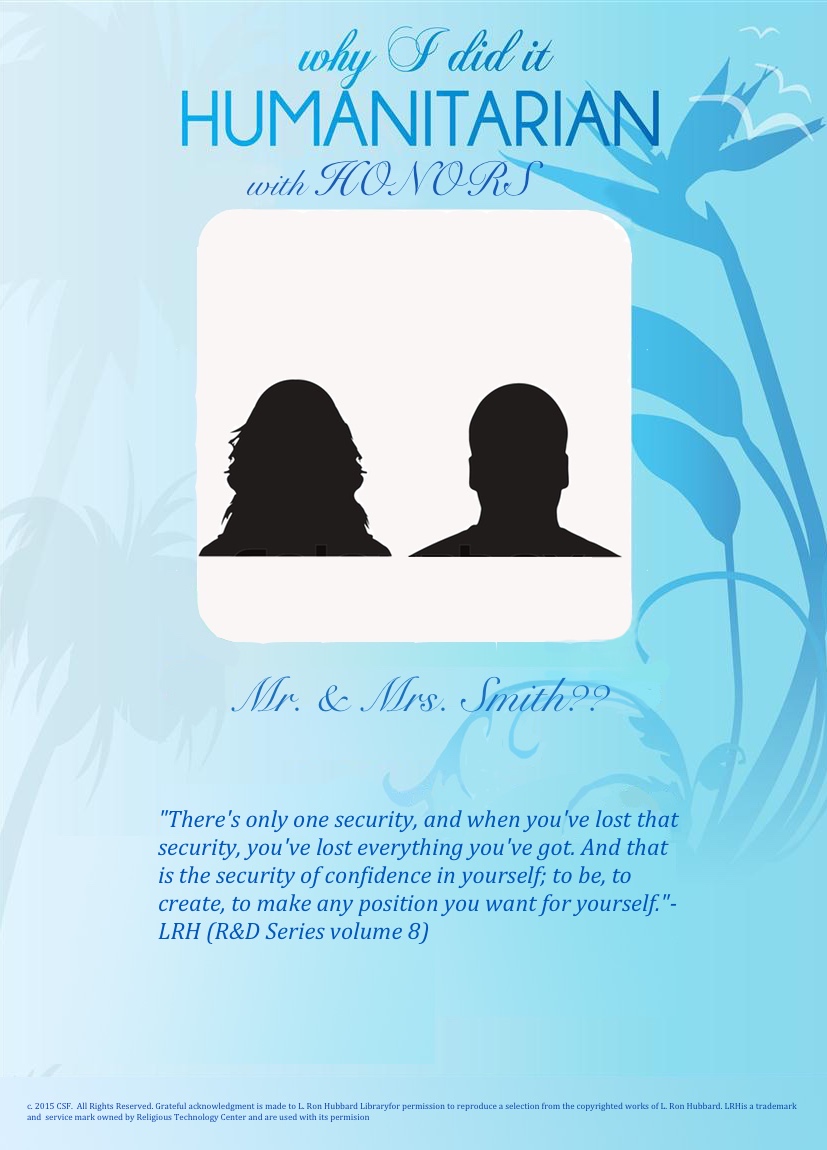 Would be more accurate to substitute “being” with “body.” 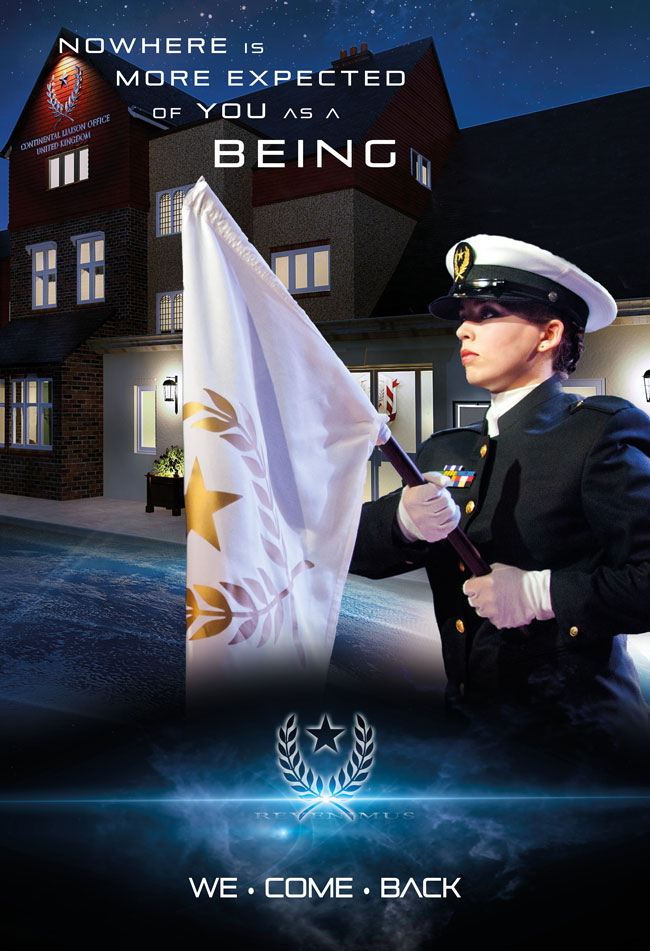 We are not old and havent been on staff for 40 years like our ED?
We enjoy mugshots?
There are 6 of us, only 184 to go?
Not much to smile about in Portland?
Whatever…? 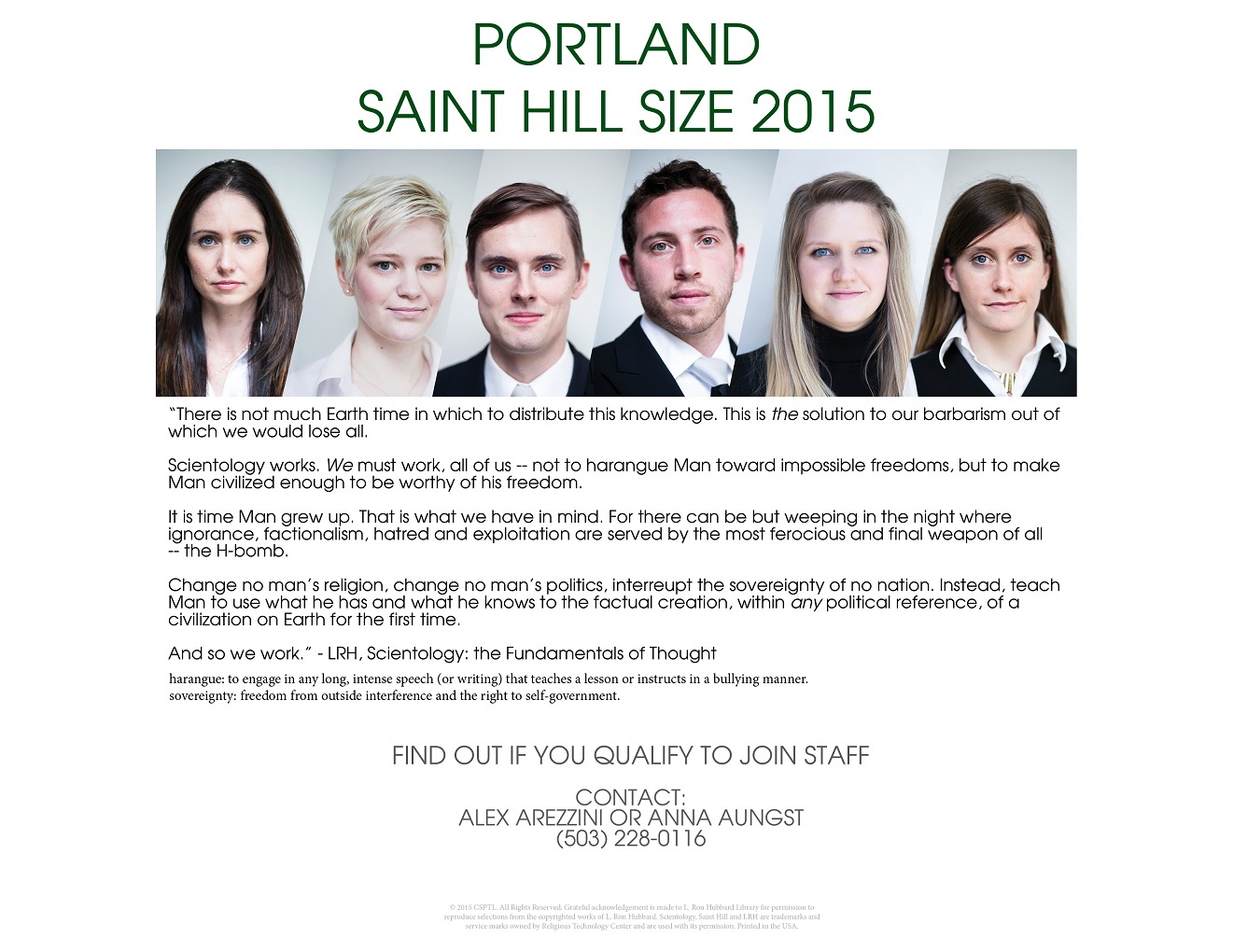 Big names have taken advantage of the 50% discount on status… Hope she enjoys being a half Vanguard with half honors.

He should demand his money back for this photo.

The renovations ballpark target is in sight

But the Superheroes just don’t seem to be able to overcome the forces of evil and make it go right to get there. Maybe their rayguns need recharging? Or they need to get the kryptonite out of the local vicinity…

Hogwarts is in Scotland. Fact. Not really.
But even if it was, the point is….? 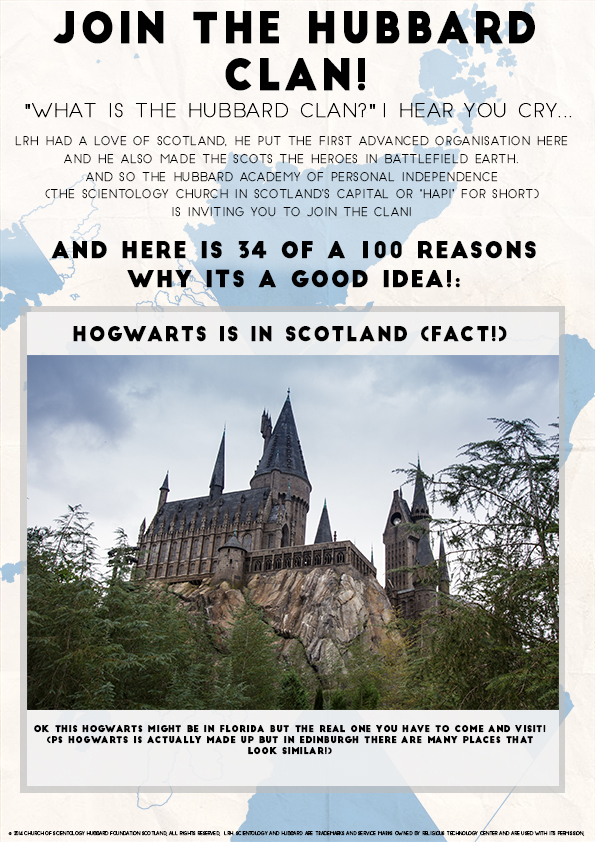 Give them props for being able to laugh at themselves. You have to love the Scots. 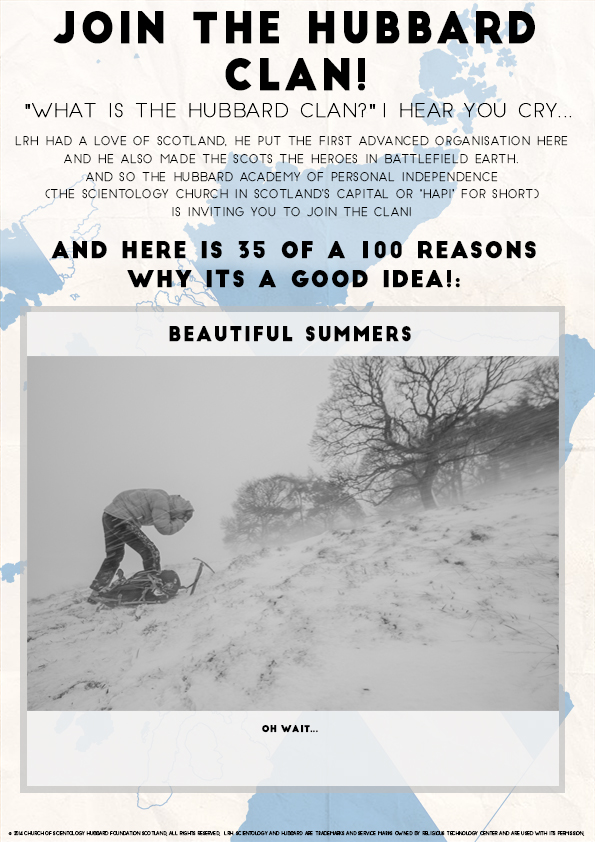