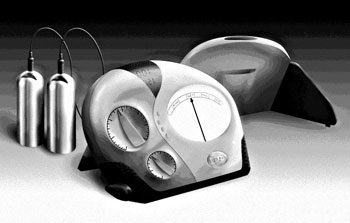 This article is reprinted from Steve Hall’s blog. It is both important and timely in light of the upcoming “Golden Age of Tech II”   They have been used at the FSO for a decade along with his “new grades,”  so maybe these enormous advances for planetary clearing can now be unleashed on the world….

Hello to all Independent Scientologists. Maybe you’ve heard rumors of a new e-meter. Here is the story.

During the evolution to create the Mark Super VII Quantum, the idea began to create a new E-meter using digital technology. In 2000 a project was launched to get this going.

Some of the goals for this new design included,

To push this project through to completion, Miscavige brought in CST executives who had proven themselves among the most capable of all Sea Org members for tasks that required highly technical electronic or manufacturing science or engineering.

This was in fact the same crew members who had created the:

After nearly two years of very hard work, research and very little sleep (2002), this CST team developed the final product called the “New Mark VIII Ultra E-Meter.” Getting there required hundreds of prototypes, designed, produced, and tested by auditors at the Int base.

Notwithstanding the fact that nearly everyone receiving auditing at the Int base were receiving DM’s personal executive C/Sing (grossly out tech per LRH), the tests using the E-meters themselves were deemed a resounding success. HGC auditors at the Int base promptly refused to use any other meter. (2002)

It is also of interest that during those two years several “flaps” came to light at the Int base. 1) The Silver Certificate requirements were completely unnecessary, but were a primary income source to Gold… a cash cow. So have been allowed to continue. 2) The Quantum was grossly overpriced. But again, at $4,000 the money was too good to pass up.

The performance of this new E-meter was so advanced that DM decided to give a prototype to his “best friend forever” Tom Cruise so Tom could use it for his solo auditing. (2002)

The final product was finalized and produced… not at Golden Era Productions but in Taiwan to cut production cost and improve profitability (2004).

Over 20,000 of the New Mark VIII Ultra E-Meters were manufactured (all with silver color) and shipped to the United States where they have been sitting in Bridge Publications warehouse since 2004.

Six years after the final production of those New Mark VIII Ultra E-Meters, they still sit on the shelf.

And what happened to those top-notch SO members after DM got what he wanted? He crushed their creativity and integrity and send them all into the SP hall. None of them survived on their post and all have been suppressed in the extreme.

Throughout 2003, DM extolled the primary virtue of his “grand marketing plan” to re-release all the books and materials as the Golden Age of Knowledge, including the “Basics,” “Congresses” and “ACC lectures”… culminating in the release of the new Mark VIII. The primary virtue was how to maximize profits and how to milk each release for all it was worth.

Miscavige has not released his great new Mark VIII meter but instead has continued selling the Quantum for roughly $4000 each (way over priced) for the same reason he hasn’t released Super Power since 1978, or even completed his empty Super Power cathedral (even though he broke ground in 1998). Most importantly, he hasn’t released the actual OT Levels (yet he launched the Freewinds in 1986 expressly for that purpose).

Obviously there is a pattern here. It seems that DM is going for the money with the current Mark Super VII E-Meter sold to public for over $4000.

If he was not he would have released the Ultra Mark VIII a long time ago.