Thanks to all for your kind and encouraging wishes following our wedding. They were very well received by us and greatly appreciated. We now return to regularly scheduled programming….

One of the most interesting was the result of a survey to establish exactly WHO the Church of Scientology is so eager to declare. It showed the bulk of those declared were long time, well trained and experienced Scientologists.  (Results here)

Another important aspect is how MANY are being SP Declared.

A good stable datum to use in gauging how many “core members” in the church is the number who attend international events.  These days, event turnout ranges between 13,000 and 17,000. The official Church of Scientology facebook page has 13,724 likes.  So, it is quite safe to assume a maximum of 20,000 core members of the church internationally.

A recent message  from a Church of Scientology staff member on David St Lawrence’s blog possiblyhelpfuladvice.com was brought to my attention.  I repeat it here: 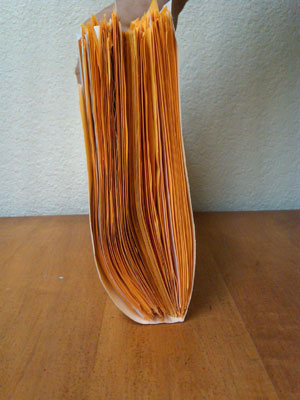 This is the file of Declare Orders received at my Org in the past 6 months. It’s over 300 pages.

We have been accumulating Declare orders in our files at this rate for the past four years. That basically amounts to 2500 people who were declared on paper.

Assuming that the claims of 40,000 Scientologists worldwide are anywhere near accurate, that means that 6% of Scientologists have been lost to outright Declares in the past four years.

I know Scientologists who have been declared, and uniformly, an average of 3 people disappear for every one that gets declared. They’re just “collateral damage”, I guess.

So that means that an additional 18% have disappeared just because the Church in its all-powerful but unjust wisdom declared good, well-intentioned people just because those people exhibited the audacity to question the orders of an out of control lunatic. By my calculations, if the Church loses 24% every four years, then it only has a maximum of another 12 years of survival left.

I recall that the Admin dictionary says “out-ethics: 2. his own concept of his own ethics is not adequate to his survival (7204C11)”.

Even a fool could see that the Church is totally wrapped around the idea of Declaring people with the intent and end result of its own demise. As much as I love Scientology and LRH, any organization so fixated on its own destruction should be allowed to shrink to invisibility. Abraham Lincoln said “A house divided against itself cannot stand.” And the lecture ABOUT RHODESIA (6607C19) taught me that individuals have a tough time against psychosis and insanity and deliberate sabotage.

Too bad Scientology isn’t delivered here any more. The staff are too busy trying to recover blown students and pcs that were enturbulated by their friends being declared without comm evs or other justice actions. So they can’t even do the usual any more.

And the Church is so busy Declaring people who want to stay in and practice Scientology that it can’t pay attention to the greater good that would be done by declaring the right one person.”

I have a slightly different analysis:

If 2500 have been declared in the last 4 years (and that may be a low figure), then that is 12.5% of the 20,000 “core faithful”.  I have observed that for each person SP Declared,  at least another one or two slip away (he puts it higher than that). Taking the conservative estimate again of 1.5 lost for every person declared this puts it at 31% of the core of the Scientology church has either been kicked or walked out the door in the last 4 years.

THIS is why Miscavige’s desperation to “prove” the “unprecedented expansion” of Church of Scientology by buying buildings and constantly harping on “square footage” and “number of ribbons cut” as the measures of the health of his empire. In fact, I think Miscavige can now put a new stat in his events and apply to the Guinness Book of World Records to attain the official status of — “Highest square footage of available church space per capita of any religion on earth.”

No organization can continue to survive the St. Moritz Death Slide that the RCS has experienced since “The Wake Up Call”.  30 plus percent in just 4 years is a little under 10% shrinkage per annum.

Too many HAVE woken up. More are opening their eyes every day. And the sight is not pretty.