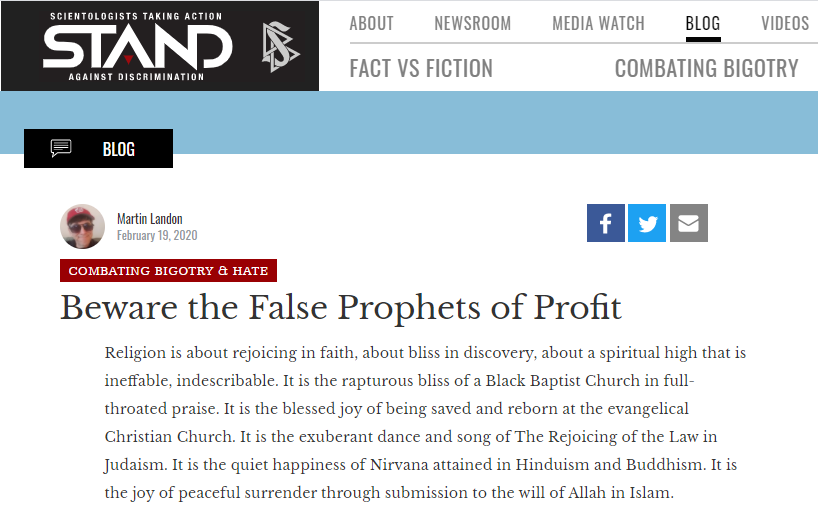 STAND League is a constant source of ideas of what should be discussed about scientology. They accuse others (usually Leah Remini and me) of exactly what they are doing. They rail again anti-Semitism, it spurs me to write about scientology and the NOI. They complain about “anti-religionists” it prompts something about what Hubbard had to say about religion. Scientology is “fun” – brings on a post about disconnection and crush regging.

And now I noticed this one.

Rest assured, every one of the “experts” scientology touts is paid. Massimo Introvigne of CESNUR., Gordon Melton, Brian Wilson and many, many others. I know, I did the original program to find “religious experts” who would write “expertises” on the subject of scientology. Every single one of them was paid for their “work,” though that fact was not made public. Tony Ortega recently covered “Apologist Academics” in his list of Top 25 People Enabling Scientology.

If you are paid to be a pro-scientology “expert” you are lauded and announced and invited to speak at conferences and your picture is prominently displayed. (And by the way, these experts are fed the information scientology wants them to have, they do NOT have free rein to go anywhere or talk to anyone).

Yet, here we have the STAND Leaguers railing against “experts” — starting out with their favorite target, the long since deceased psychologist, Margaret Singer.

Because they assume the trappings of religion, for the benefit of tax exemption, they loudly proclaim that a psychologist is “anti-religion” and  “would deny people the opportunity for such increased spiritual awareness and fulfillment? Who would say, “Sorry, not for you,” to those reaching for a drink at the fountain of revelation? Well, believe it or not, there are such people. They are people with college degrees, who wear suits and write scholarly books. They are people who, in short, should know better. But because they get paid big bucks to testify in courts of law as “experts on religion,” while yet regarding religion and people of faith with imperious contempt, they persist on their unholy road.”

I guess Martin Landon isn’t aware that the “experts” scientology relies on fit his description above to a “T.” Scientology’s experts are all wonderful people with college degrees who wear suits and write scholarly books — but they take scientology’s side in any argument. Because they are paid by scientology.

He then targets Dr. Stephen Kent, a sociologist and particularly nice person. According to Landon he “steadfastly clings to Singer’s universally rejected work like a flea to a hound. It is, after all, his livelihood. Kent gets paid, just as Singer did before him, to trash new religions as an “expert witness.” He gets his research “data” from apostates and from hearsay, rumor, and distinctly slanted information based on exactly zero evidence.”

Obviously, Martin Landon knows nothing about Dr. Kent. Stephen’s library of information on scientology is VAST, and includes more materials of L. Ron Hubbard than anywhere on earth other than scientology itself. And he has studied a great deal of it. In fact, I would put my money on Dr. Kent in a competition with Landon or anyone else from STAAD on knowledge of the writings and words of L. Ron Hubbard.

Dr. Kent assisted us when we were doing The Aftermath. He got paid nothing. He found documents and provided information without ever asking for any compensation.

Landon prattles on: “There’s lots of money to be made, apparently, for apostates filing civil suits against their former religion, and Kent follows the money.” It’s unsurprising he has no specifics to offer?

‘The likes of Singer, Kent and other “experts” espouse promises huge dividends to those who turn on the people of good will who helped them. Unable or unwilling to experience the bliss of their brothers and sisters in faith, they opt instead for the cult of Betrayal for Profit.” I wonder if Landon is referring to the families of those who died at Narconon after accepting their “good will”? Or perhaps Laura DeCrescenzo who was forced to have abortions and driven to suicide in the Sea Org? Those people of good will?  I don’t even know if Dr. Kent was called to testify in any of those cases but they are the ones I am familiar with where there was “a lot of money to be made”?

He waxes all poetic and butt-hurt in his final sentences:

“Beware of false prophets, which come to you in sheep’s clothing, but inwardly they are ravening wolves,” warns the Apostle.

In our time, the false prophets ply profits for their followers, their ravening “bliss” spawned from court orders and pieces of paper with dollar signs.

Is this any way to live? Trading one’s chance at immortality for a few pieces of silver? Apparently some swear by it, and instead of whiffing the sweet fragrance of epiphany, prefer to dive head-first into a sea of mud.

There’s simply no accounting for taste.

The one thing you said that is true Martin is your last sentence. I was thinking exactly the same thing about you.

And a final thought. Has there even been anyone more deserving of the moniker “False prophet of profits” than L. Ron Hubbard?