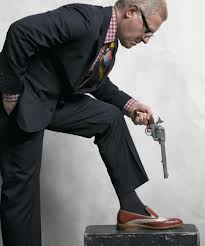 Responding to reporter Dana Kennedy in a piece published this morning in the Hollywood Reporter, Pouw/Miscavige once again assert that disconnection does not exist, it is merely a “personal choice.”

Here is a passage from the article:

Karin Pouw, a spokesperson for the Church of Scientology, tellsTHR that there is no such policy of disconnection.

“While none of this is a comment about Ms. Remini, our general response is that the church supports families and has never had a policy which breaks up families, a myth perpetuated by individuals who are either misinformed or attempting to sensationalize their own life choices or those made by their family members,” Pouw says. “While the church encourages close family relations, in the end church members decide for themselves whether to communicate or not with a person who is openly antagonistic to them or their religion. When [disconnection] occurs, that person is simply exercising their right to communicate, not carrying out any mandate from their church.”

The brazen lie has been repeatedly disproven. Dozens of articles have been written disproving this lie — on my blog, on Tony Ortega’s blog, on Marty Rathbun’s blog, on Scientology-cult.com,  in the New York Times, The Tampa Bay Times, in Paul Haggis’ original letter to the church, in Larry Wright’s book, Janet Reitman’s book and dozens of other places.

That the church — instead of ENDING the practice — continues to try and follow the Lance Armstrong school of public relations simply means that like Armstrong, they need to be hit over the head with a 2×4 a few more times.

Pouw/Miscavige then discussed the by now infamous “WhoIs” sites the church has created to smear whistleblowers. After trying to keep their distance (as they did with the “Squirrelbusters” until they were busted) they are now referring the media to these sites and admitting they are responsible for the “content.” That they consider these sites do anything other than cause the unfortunate who click on them to gag and wonder at the sanity of the people responsible for putting them together is astonishing. It is like the Freedom magazines the church publishes. They are so childish and so full of hatred and gutter sniping cheap shots that even Scientologists are disgusted by them.

It is a sign that the media inquiries are forcing the church to break their silence, and every time they do, they shoot themselves in the foot again.

Nevertheless, here is what was reported in THR:

Dozens of “WhoIs.com” sites have been published over the years, and those that are publicly accessible feature unfavorable material about a number of detractors and former supporters of Scientology. WhoIsPaulHaggis.com describes the Oscar-winning director, who left Scientology in 2009 after 35 years, as a “status-driven screenwriter” among many other derogatory statements. The sites contain no obvious links to Scientology but certainly reflect the church’s viewpoint about its most vocal critics.

Pouw, who has said that the organization does “not comment on its parishioners,” acknowledges that it has “supplied information” to the WhoIs.com sites for Rinder, Marty Rathbun and others but denies any involvement in the purchase of the WhoIsLeahRemini.com website.

“Regarding ‘Who Is…’ the church has never hidden the fact it supplied information for the websites concerning Mike Rinder or the other members of Marty Rathbun’s posse of lunatics you refer to,” Pouw says. “Despite the chronic whining you hear about the sites, each came about to document the truth about these anti-religious fanatics.”

As for Remini, Pouw says, “Let’s be clear: We have had nothing to do with any website about her and have no idea who registered the site.”

But the six shooter wasn’t back in the holster yet. As is Miscavige’s modus operandi the effort then becomes to shift the narrative. There are no responses to the topic of the story — the statements of Leah Remini and Paul Haggis. Their statements and claims are transformed magically into rumor peddlers hurling made up stories? And then they launch into the ad hominems about the “fringe bloggers”. As if the SOURCE of the disclosures are the bloggers?

“We find it disheartening to see the media provide a small group of rumor peddlers and gossips with yet another opportunity to hurl malicious, made-up stories,” Pouw told THR. “Unlike the self-promoters behind this orchestrated campaign, the church respects the religious beliefs of others and the privacy of parishioners. Numerous myths, gossip, rumors and falsehoods regurgitated over the last few days have their origins with a small collection of obsessive fringe bloggers exploiting others to promote self-serving, hateful agendas.”

Mike Rinder, who has not been able to speak to most of his family members still inside the church since his defection, told THR that in his opinion the information found at the websitewww.whoismichaelrinder.com could only have come from his auditing files at the church.

“They have letters purportedly written by my ex-wife and daughter about stuff that they could never have known about,” says Rinder of the website devoted to him. “Even worse, they take a kernel of truth and turn it into a lie. It says on the site that I stuck firecrackers in the butts of cats when I was a kid. What I actually did was blow up ant hills with firecrackers. Either way, it was never something I discussed with my ex-wife or daughter.”

Of course, there is another interesting point concerning letters from my daughter and ex-wife (that were emailed to me anonymously before appearing on the site). They are both Sea Org members. As such they are not allowed to communicate to me. The letters were written in their name by people in the church — probably Miscavige himself. They have NO access to the internet. They cannot have their own email address. It is just a further admission that the sites are 100% created and orchestrated by the church.

And in the meantime, Pinocchio was responding to a lengthy article by Fox News reporter Hollie McKay in which she finally identified for one and all just WHO the “unemployed fringe bloggers” are:

“The two bloggers who have been pushing this story have been obsessed for years with spreading falsehoods to smear the Church.  They are unreliable. You really should look into the specific Internet sources being used in this story,” said rep Karin Pouw, adding “links with documentation of their unreliability” to http://whoismichaelrinder.com and http://whoistonyortega.com

Around that same time, the domain http://whoisleahremini.com

was registered, although the buyer’s information remains private.

The Church of Scientology did not respond to repeated requests for further comment for this story.

Wonder why? Ran out of bullets maybe and are taking a breather to reload?