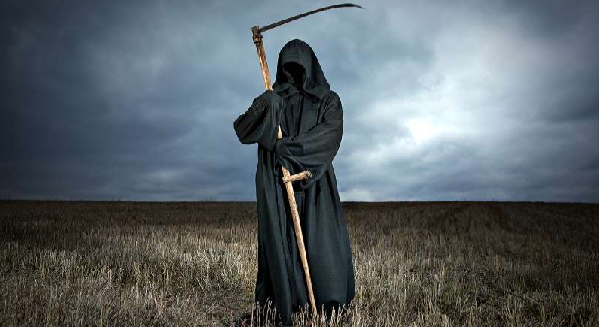 A couple of days ago, Tony Ortega posted a lengthy “success story” from a woman who had recently completed “Super Power.” Of course, it was over-the-top bizarre, but one paragraph stood out:

While on the rundown two major SPs (2.5 percent) connected to my dynamics received their bitter end. One died in an unexpected way, and the other got put in a psychiatric hospital by his best friend. This filled me with the glory of justice.

I doubt there is a more clear-cut example of the callous disregard for human life into which scientologists are inculcated than this.

Many former scientologists, including Leah Remini and me, have made the point that scientologists believe their “enemies” do not deserve to live. Some have thought this was an exaggeration said just for effect. I give you this woman as Exhibit 1. She said the quiet part out loud. This IS what scientologists are taught to believe. That those who are “SP’s” should be dead or incarcerated in mental institutions (which to scientologists is in fact worse than dying because “the psychs” will implant you to destroy your future lifetimes). And when someone you deem to be an enemy or SP meets their demise, it is a result of the “glory of justice.”  They got what they so richly deserved. No remorse. No compassion. No empathy.

It should come as no surprise. Hubbard never had much problem saying the quiet part out loud. Over and over. Anyone who has been schooled in the world of Hubbard knows this is a perfectly reasonable attitude to have towards your enemies. The SP’s of the world do not deserve to live. My own children have been taught that I do not deserve to live and will see it as the “glory of justice” when I shuffle off this mortal coil.

A glance at just SOME of what Hubbard wrote will send shivers down the spine of normal people. Starting way back in 1951 in his second major book on the subject (emphasis mine):

There are only two answers for the handling of people from 2.0 down on the tone scale, neither one of which has anything to do with reasoning with them or listening to their justification of their acts. The first is to raise them on the tone scale by un-enturbulating some of their theta by any one of the three valid processes. The other is to dispose of them quietly and without sorrow. Adders are safe bedmates compared to people on the lower bands of the tone scale. Not all the beauty nor the handsomeness nor artificial social value nor property can atone for the vicious damage such people do to sane men and women. The sudden and abrupt deletion of all individuals occupying the lower bands of the tone scale from the social order would result in an almost instant rise in the cultural tone and would interrupt the dwindling spiral into which any society may have entered. It is not necessary to produce a world of clears in order to have a reasonable and worthwhile social order; it is only necessary to delete those individuals who range from 2.0 down, either by processing them enough to get their tone level above the 2.0 line — a task which, indeed, is not very great, since the amount of processing in many cases might be under fifty hours, although it might also in others be in excess of two hundred — or simply quarantining them from the society. A Venezuelan dictator once decided to stop leprosy. He saw that most lepers in his country were also beggars. By the simple expedient of collecting and destroying all the beggars in Venezuela an end was put to leprosy in that country.

Here he explains that those who don’t support scientology are harming good people and because of this they end up dead. He adds some crocodile tears disclaimers to his boasts.

The person is blowing himself off with his own overts and withholds. If these are not removed then anything the Organization or its people does to him goes in like a javelin and leaves him with a dark area in his life and a rotten taste in his mouth. Further he goes around spouting lies about the Organization and its related personnel and every lie he utters makes him just that much sicker. By permitting a blow-off without clearing it we are degrading people, for I assure you, and with some sorrow, people have not often recovered from overts against Scientology, its Organizations and related persons. They don’t recover because they know in their hearts even while they lie that they are wronging people who have done and are doing enormous amounts of good in the world and who definitely do not deserve libel and slander. Literally, it kills them and if you don’t believe it I can show you the long death list.

Just this year I had an electrician who robbed HCO of money with false bills and bad workmanship. One day he woke up to the fact that the Organization he was robbing was helping people everywhere far beyond his ability to ever help anyone. Within a few weeks he contracted TB and is now dying in a London Hospital. Nobody took off the overts and withholds when he left. And it’s actually killing him – a fact which is no fancy on my part. There is something a little terrifying in this sometimes. I once told a bill collector what and who we were and that he had wronged a good person and a half hour later he threw a hundred grains of veronal down his throat and was lugged off to hospital, a suicide.

Hubbard opines on the biggest mistake Manuela Saenz made in her life — not killing Simon Bolivar’s rival Santander:

Her most fatal mistake was in not bringing down Santander, Bolivar’s chief enemy. That cost her everything she had before the end and after Bolivar died. She knew for years Santander had to be killed. She said it or wrote it every few days. Yet never did she promise some young officer a nice night or a handful of gold to do it in a day when duelling was in fashion. It’s like standing around discussing how the plainly visible wolf in the garden that’s eating the chickens must be shot, even holding a gun, and never even lifting it while all one’s chickens vanish for years.

In a land overridden with priests she never got herself a tame priest to bring about her ends.

She was a fantastic intelligence officer. But she fed her data to a man who could not act to protect himself or friends, who could only fight armies dramatically. She did not see this and also quietly take on the portfolio of secret police chief. Her mistake was waiting to be asked-to be asked to come to him, to act. She voluntarily was his best political intelligence agent. Therefore she should have also assumed further roles.

She guarded his correspondence, was intimate with his secretaries. And yet she never collected or forged or stole any document to bring down enemies either through representations to Bolivar or a court circle of her own. And in an area with that low an ethic, that’s fatal.

She openly pamphleteered and fought violently as in a battle against her rabble.

She had a great deal of money at her disposal. In a land of for-sale Indians she never used a penny to buy a quick knife or even a solid piece of evidence.

And these are two steps of his “formula” for Power:

Scientologists claim this writing is merely parable and not intended to be taken literally. That this often-cited policy letter is simply a dissertation on a book about life as it was centuries ago. But there can be no doubt about Hubbard’s attitude towards those who are “enemies.” His formula is for the present day and the future. It is the steps he asserts must be taken to retain power. And the idea that Hubbard’s words are not to be taken literally is only EVER said to people outside scientology when they are trying to save face or avoid guilt. To a scientologist, his words are to be taken very literally and very seriously.

And even if “the Simon Bolivar PL” (as it is widely known) were all merely a parable about a long gone era, what follows is most certainly not.

Hubbard published these directions concerning those he thought were stealing his “technology” for their “personal gain” in a scientology magazine for the world to see. 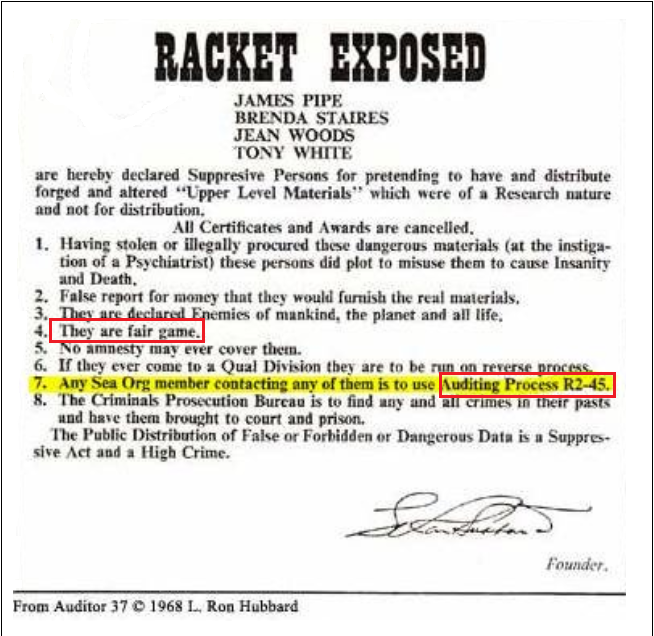 There is no room for doubt with this one.

Though scientology claims Hubbard’s reference to “Process R2-45” is a Hubbard “joke,” they do not dispute that it is a reference to using a .45 pistol to shoot someone in the head in order to separate their thetan (spirit) from their body. That IS what it means.  And even if he was joking at the time he first described it, he was not joking in 1968 when he directed Sea Org members to use it against his enemies. What else could this mean?

There is much more Hubbard about how to treat enemies and SP’s detailed in my earlier posting: Dealing with Critics of Scientology: The L. Ron Hubbard Playbook.

The podcast tonight is the third edition of “Listener Questions” and we have some great topics as always… I will as always do a post with the documents associated with the episode along with the link to the podcast itself.