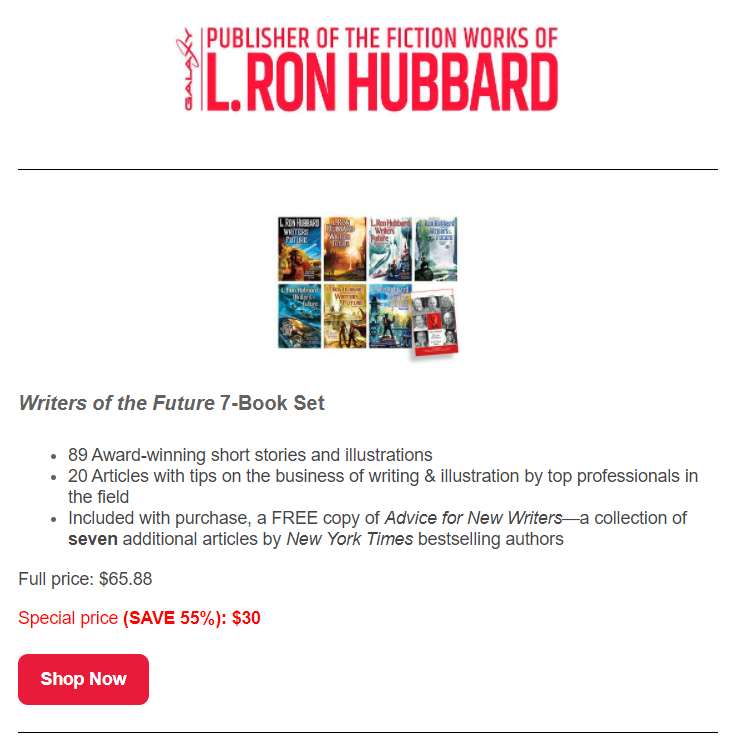 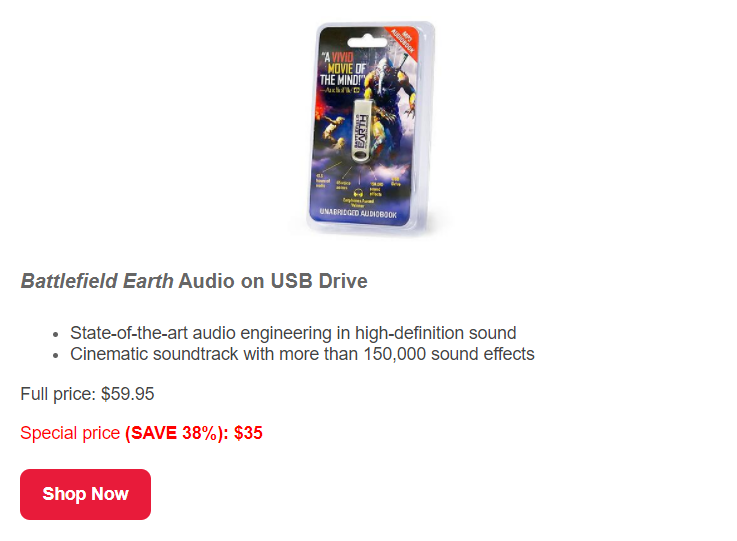 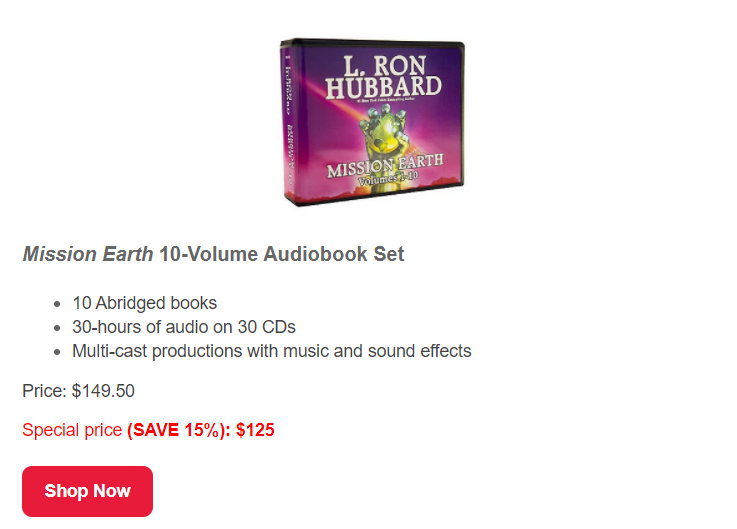 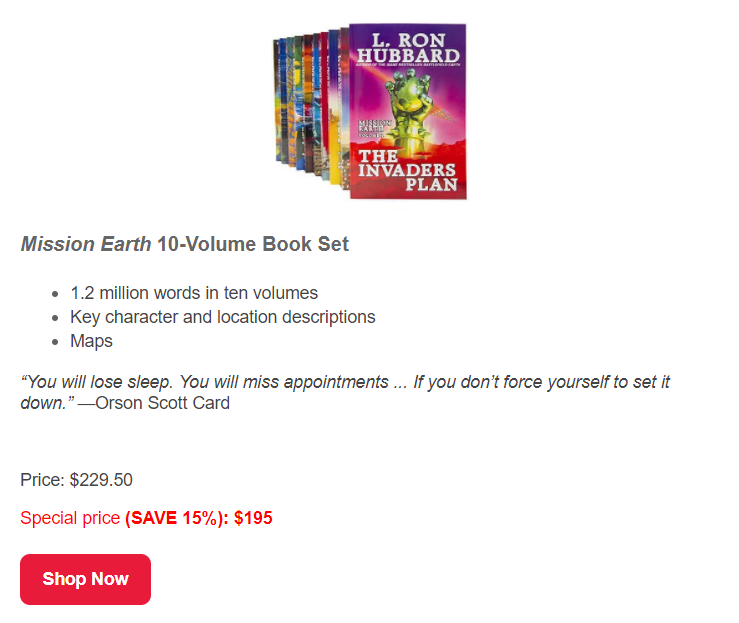 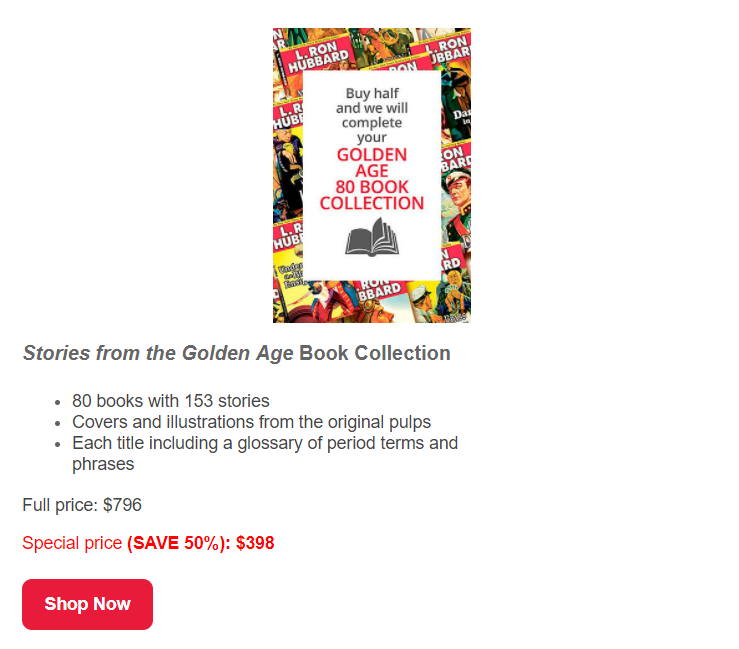 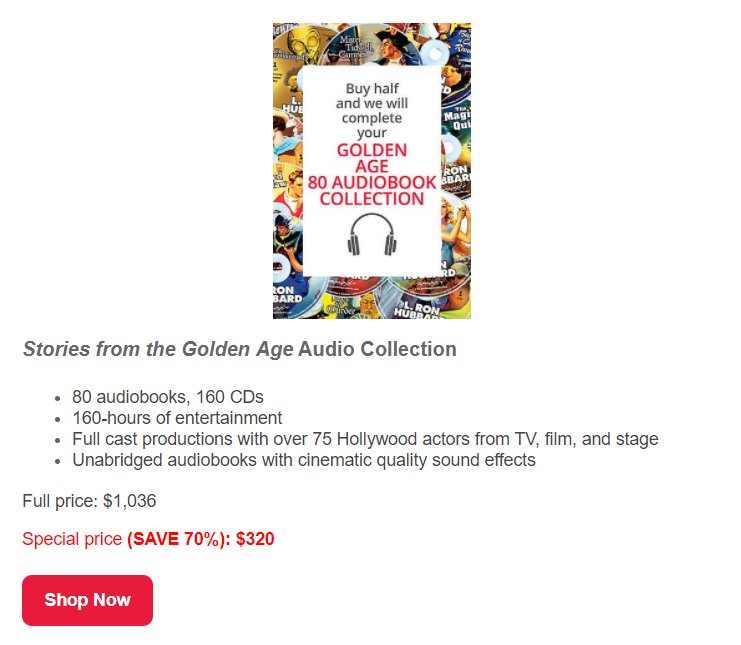 Our old friend, Clearly Not Clear, sent this to me with some comments….

I’m looking at the writers of the future 7 books set. It seems to suggest that 89 of these stories won awards. I doubt it. I wonder what awards they did win? Since nobody wants to buy 7 year old anthologies, they include “advice for new writers.” This is somebody’s bright idea. Well, it’s really not a very bright idea in my opinion.
Now, can we talk about Battlefield Earth on audio? Seriously 150,000 sound effects? Was that like the stat of the week? How many sound effects and farts can I record to be in screaming affluence so I can get a $50 bonus?
In the department of why?, tearing my hair out, considering gouging my ears off. A Mission Earth 10 volume audiobook set? Picture yourself driving in heavy traffic and you’re having to listen to El Ron’s horrible writing of repetitive sex, that is so boring, yet disgusting at the same time, and your 10 year old is in the other seat ears turning red. It was bad enough reading it when I was in the church and suffering through the reading of each of these books as they were released, after ostentatiously buying them from B Dalton. Full disclosure number 8 wasn’t bad. The rest, dreck.
Only in Scientology promo would they start the sales pitch with a stat like 1.2 million words in 10 volumes. Considering how proud they were to coin a new word for a 10 volume set, decology, I’m sure someone’s going to be comm ev’ed for saying ’10 volumes,’ instead of ‘decology.’  This wasn’t worth reading when it 1st came out and all these years later it’s even worse. And what happened to Orson Scott Card, mormon dude? That he would say something nice about it? I’m thinking perhaps the Russians had compromising photos of because seriously, why would you give this quote? The only reason you’d ‘lose sleep’ is because you were so disturbed by the topic that got pounded into your head in your latest bout of forced reading. The only reasons you would ‘miss an appointment’ is because you felt ill after reading some of the sexual passages in these dreadful books. I find his quote to be absolute rubbish.
Then the dim bulb award for bright ideas goes to the staff member who gave us the Golden Age book collection. 80 books with 153 stories. Since I see El Ron’s name plastered on them all, I can only guess that while they were unplugging the chimney vent in the attic of the Paris garret that El Ron rented decades ago, while hiding out from whatever country was hunting him down like a criminal, they found some of his discarded short stories that  should have remained discarded. Yet here they are. Some luckless soul, now languishing in the RPF’s RPF, said, “let’s publish and print all of these 80 books and make enough copies for all the missions and orgs of the world and all of the people who are going to immediately order this.” Now the pallets are gathering cobwebs and the rats are starting to gnaw the pages in their special Ideal storage org in the city of Commerce.
As you can see, I find this promo piece to be the epitome of the hubris that is Scientology.
Some luckless new sea org member was probably given a clipboard and asked to wander El Ron Hubbard Way and survey people about their interest in buying this 80 book set. Every person they asked had a hunted look and of course rictus-smiled on reflex and insisted that this was a great idea.
What if the person who wrote this marketing bit of flab was having a massive moment of cognitive dissonance?? What if they’d seen the stacks and stacks and stacks of plastic wrapped and unsold collections of short stories? What if they knew that even if they shipped them off to missions and orgs that did or did not exist, that they would never be paid for? Maybe it’s that person and their cognitive dissonance that decided to leave off the word ‘Decology’ and put ’10 volumes’ as his last grasp of reality-speak? Will this sad person be handed a toothbrush and see an arm pointing toward the nearest dumpster?
I am so not ordering any of this crap. I am however greatly amused at this hubristic shilling, as if anybody is going to respond except those in Ethics, who want to say, “I ordered it! See? I’m a good scientologist!”
Okay, rant over,
Clearly Not Clear
And then, there is this.
“Historical Facts” based on Hubbard”s fiction? Who knows what this even means? The actual truth about his stories maybe?
They should really be doing this for the later years: “Are you interested in the actual facts about the fiction of Dianetics and Scientology?” Or about the fictional life of L. Ron Hubbard he told and we repeat? 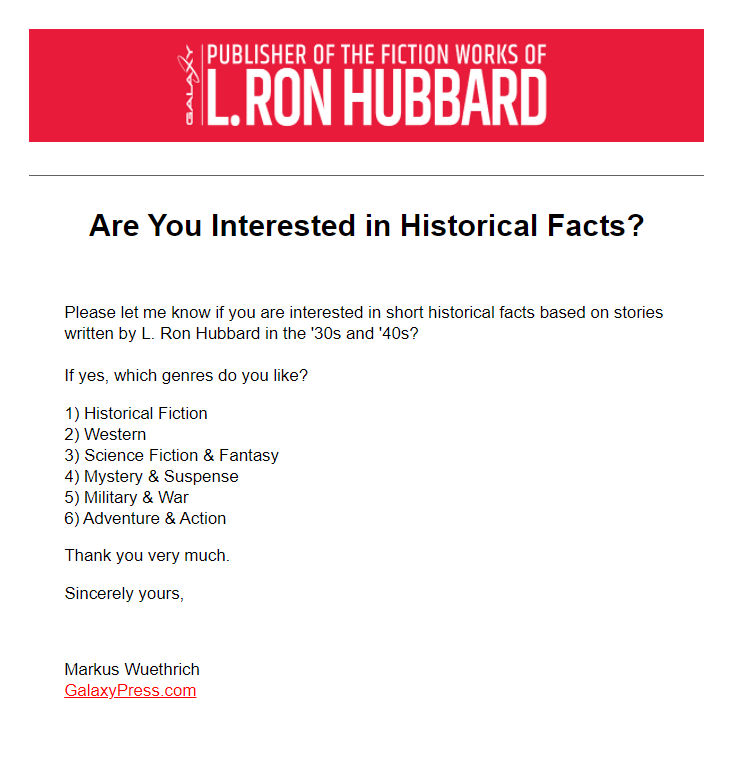