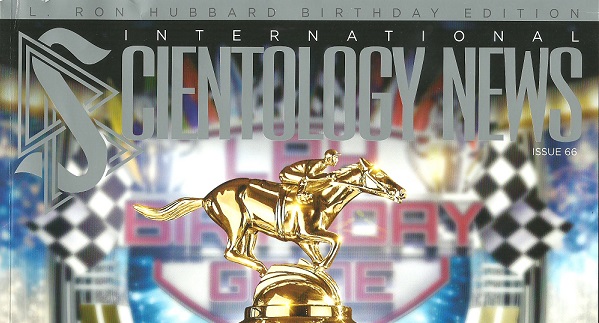 Had a chance to look through the latest International Scientology News — the propaganda piece sent out after each international event to re-hype the event hype.

Based on this magazine alone, things are going to hell in a hand-basket in the shrinking bubble of scientology.

What is fascinating about it is what is does NOT contain. It is virtually “expansion news free.” Nothing that reflects the “massive international expansion” Miscavige is constantly mentioning. And all I did was flick through the pages and look at the pictures, I could not bring myself to read any of the drivel.

Here are some key points:

The first pages of “stats” all relate to the “recognitions” for LRH – from major cities like Montufar Canton, Ecuador, and the “Faculty of Maritime Study of the University of Montenegro” and a retired Superintendent from the Danish National Police. Just a bunch of puff. No substance. Not even a good “rolling thunder” (as Miscavige likes to call it) of rat-a-tat-tat “stats” said without a breath and accompanied by much crashing and banging and graphs “breaking through the roof” (though without any numbers on the scale). No “47X” or “13.134 times more people partaking in spiritual aid than in the previous 17 semesters prior to the launch of the second golden age of golden eggs” blah blah. Couldn’t even make stuff up I guess.

Then there is a filler page rehashing the “Historic Landmarks of Earth” – the 6 “LRH properties” around the world and another page promoting “upcoming” ideal orgs that everyone has been hearing about for 10 years.

In the whole magazine there are only 2 full page photoshops of “COB” – a severely crashed statistic. He must be getting embarrassed after the number of times he has been called out for filling the magazine with posed shots of himself in true Kim Jong Un style.  In amongst the word-salad they proclaim this to be the “largest LRH Birthday Celebration in history.” I wonder what this is based on?  The event is held in the same Ruth Eckerd Hall now for 25 years. It has never outgrown the 2300 seats despite the 12,000 local scientologists. There were NO Ideal Org openings shown.  It was the same number of Birthday Game awards as ever. Perhaps it was the length of the Shermanspeak “Source Briefing” that was “largest”?

Be that as it may, there is only a short page of text accompanying a full page shot of the mulleted-one rather than the usual 10 pages rehashing the “source briefing.” Wonder if they are getting tired of the “facts” they present being shot to pieces as soon as they are heard by anyone outside the bubble. 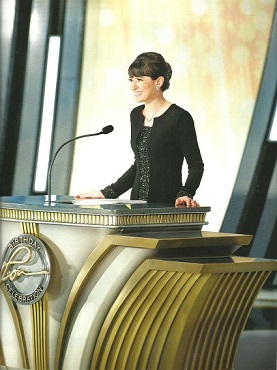 The biggest section of the magazine is devoted to the “Birthday Game Winners” — awards presented by “Ms. Erin Banks from the International Management Public Relations Office.” She too gets a full page glamour shot. More than “Executive director International” Guillaume Lesevre has been given in a decade or more. And he has vanished without mention and certainly without sorrow. Of course if anyone dares ask where he is, they are hustled off for a “metered interview” to get to the bottom of their “disaffection.”

Lots of bs with the winners of course. These awards totally are rigged every year. To fill up the event they brought the Continental Winners for Missions and Orgs onto stage with a little hype about each. Formerly they just showed a short video clip of the continental winners and brought the international winner to appear live at the event. They flew the “winning” org and mission ED in from every continent to try and fill out the event.

The international org winner was Basel. Check out the reality of the Basel Org recently SHOWN here — and that will tell you everything you need to know about the state of scientology orgs internationally. Basel is supposedly the fastest expanding scientology organization on earth!

The winners from each Continental area in the “Class V League”: Pasadena, Bogota, Tokyo, Tampa, London, Johannesburg, Quebec. Wonder if it ever strikes anyone as odd that its ONLY “ideal orgs” that win. You can see a report of the state of Joburg Org here.

You get a flavor of the sort of manufactured smoke and mirrors that is presented for each of these orgs by reading the text on this page. It’s so contrived only ONE Org mentions the total Well Done Auditing Hours — “over 15,000” which is 300 per week. I wonder if anyone told them that DC and Munich were doing more than 1000 hours per week in the 1970’s? 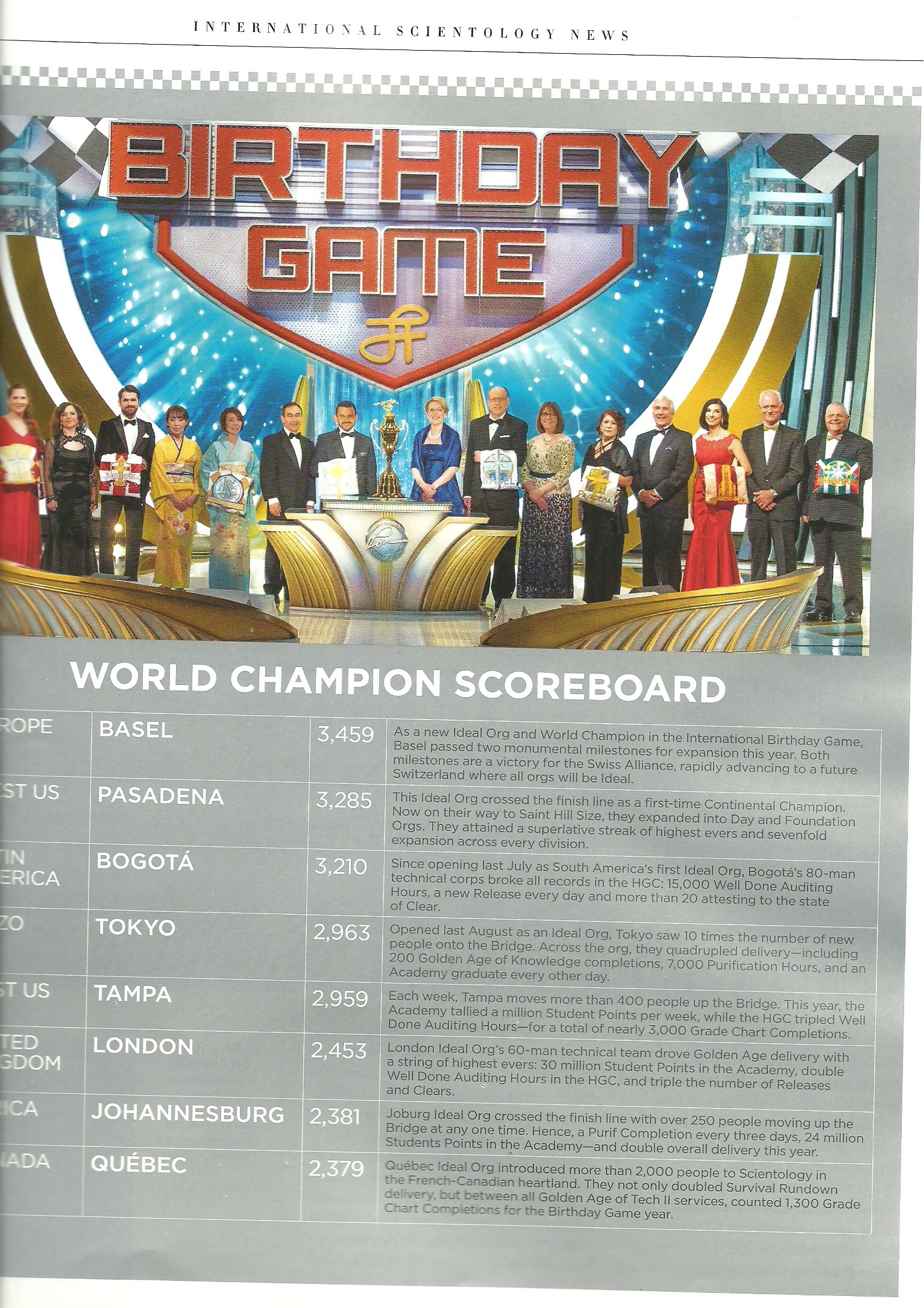 But the biggest outpoint of all is this: Not only did the “Model Ideal St Hill Size Sea Org Class V Org” (LA Org) not win the international birthday game, it didn’t even win WUS!!! This is where all executives from around the world are going to “train” on how to boom their orgs. Clearly, they are NOT booming. So much so that reports have just come in that all the executives in the Ideal PAC Bridge — AOLA, ASHO and LA Org have just been busted! These are the biggest and bestest orgs on earth. And now along with the latest “ideal” SO Org (AOSHUK) the execs have been shit-canned.

Back to the ISN.

Then there is 6 pages devoted to the same old photos of the SuMP “soon to open” and 8 pages devoted to the not yet opened Atlanta Org. In the past, there is NO WAY Miscavige would talk about an org that was not yet open as a “Done!” It’s a sure sign of desperation. And this one is announced as DONE in capital letters, “gallantly leading the ideal org advance” from behind, as it would not be opened for another 3 weeks. 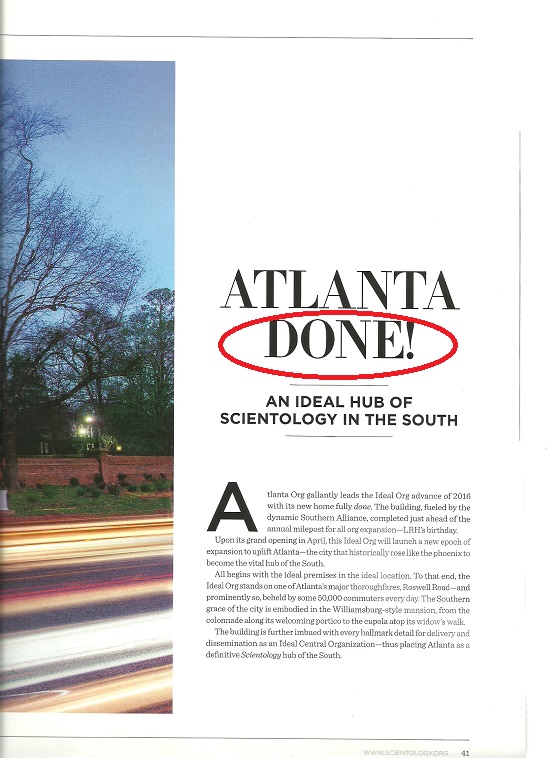 There are 4 pages devoted to “The Basics”, 4 pages to the “Glorious State of Clear” and 4 pages to “A Planetary OT Boom” — these are just all old “success stories” and hype. Another 4 pages to the wonders of Flag and 4 more to the miracle of the Freewinds.

And the only other “announcement” is the hype an bout the “foundation to all metering and auditing skills” being “now available” — “The LRH technical training film, How The E-Meter Works.” There must be so few auditors left in scientology that Miscavige believes nobody realizes the film was available for 20 years, but he decided to withdraw it due to being “infested” with now declared SP’s. Look at these idiotic “success stories” making it look like this is an amazing breakthrough…. 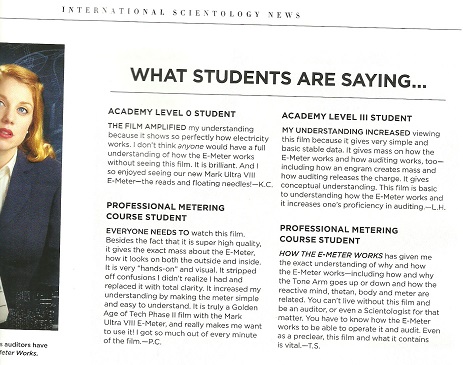 And then, the final “tell” that there is absolutely NOTHING to say at this event.

The ubiquitous EPIC WINS “Success Video” now extended to 7 MINUTES and OVER 60 VOICES! This thing is stuck to the back of the free magazine. Yet if you want to get a CD (cheaper to make than a DVD) of a lecture, it will cost you anywhere between $20 and $50 each. This is perhaps the most bizarre thing in the whole sorry story. Because they make the video 7 minutes long — too long by 3 times at least — they promote it as “evidence” that everything is peachy-keen. “Look, we made a higher stack of fake success stories, so obviously everyone is winning.” 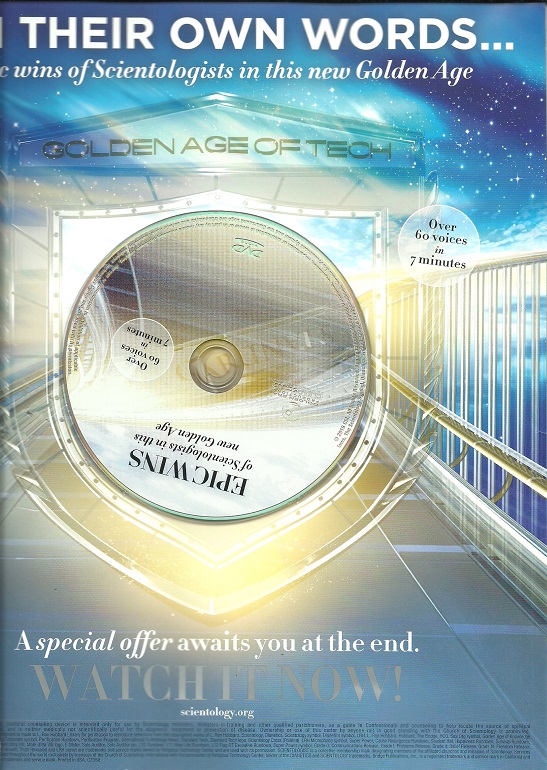 Without doubt, this is the most underwhelming, empty March 13th event ever. I have been attending or watching (post 2007) since the  FIRST “international management briefings” occurred back in the late 80’s — and participated in them from 1990 through 2006. This was an “F” – even the CGI and fake stats have run their course. There is just nothing to say any more.