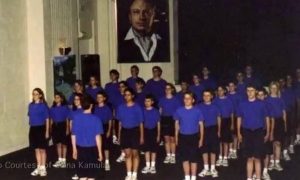 From the recent FBI release, a letter sent to the St Petersburg Times in 2010. This may have been put on the SP Times website back then, and may not be something new, but I had not seen it before. It's a doozie. It is a compilation of lies, nestled in the usual "other religions have practices like ours" and repeated "anyone who tells you something different than what we say is a liar." The numerous, heartbreaking, independent yet similar stories of Sea Org members being coerced/forced to have abortions is addressed with the flimsiest response "we don't advocate abortion" and anyone … END_OF_DOCUMENT_TOKEN_TO_BE_REPLACED

Another of the documents from the recent FBI docs release. In September 2009, not long after the investigation began, scientology made an FOIA request to get all docs concerning any investigation of scientology. Though the originator of the request has been redacted from the letter, you can see in the accompanying fax cover sheet that this is a request from scientology. This is not a "routine" request that is filed every month. It is a request because scientology became aware of the FBI investigation. Yet, despite this, in 2013 they denied any such investigation took place … END_OF_DOCUMENT_TOKEN_TO_BE_REPLACED

See my announcement on Friday -- I am revisiting earlier posts during my vacation. Each day there will be a different one. While I might write this a bit differently today it still overall delivers the same message... Dear Andrew, Taryn & Cathy, You made a big issue out of my failure to respond to your letters, so I am responding herewith to the letters each of you sent. I note that Jude sent me a letter when I was living in Denver – but didn’t send another in the second round after I moved near where she lives, and Benjamin didn’t send me a letter at all. I guess the Church is … END_OF_DOCUMENT_TOKEN_TO_BE_REPLACED