This recent promotion on Facebook brought up the subject of “Between Lives Implants,” one of Hubbard’s crazier concepts. 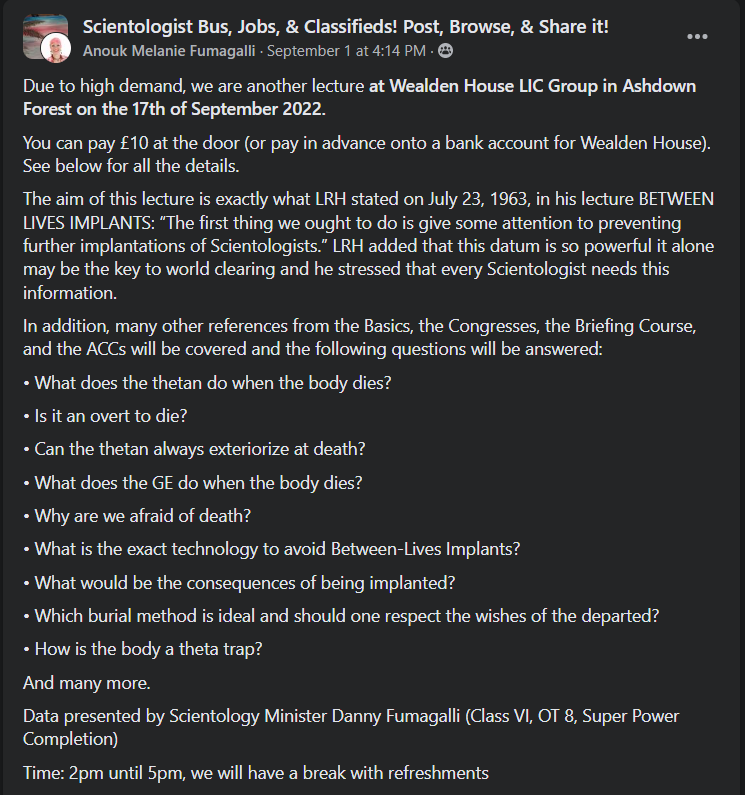 Their lecture is necessarily a regurgitation of Hubbard’s “technology” contained in his wonderfully bonkers book, History of Man.  You know, the one that begins:

The test of any knowledge is its usefulness. Does it make one happier or more able? By it and with it, can he better achieve his goals ?

In this book, which, like everything else Hubbard wrote or said, is still presented as undeniable truth even today, is a lot of absolutely batshit crazy stuff. It’s where the derisive term “clam” comes from to describe scientologists as Hubbard explains how you can make a person’s jaw ache and teeth fall out by motioning with your thumb and forefinger, imitating the opening and closing of a clam shell.

In any event, this subject of “Between Lives Implants” and the “GE” (Genetic Entity, also referred to at the Genetic Being) is interesting for another reason. It was the Hubbard reference used with many pregnant Sea Org members to coerce them into abortions on that basis that their fetus was simply a piece of meat as “the thetan only assumes the body just before birth.”

The theta being apparently joins the track immediately prior to birth. Its sequence, for itself, is DEATH, BETWEEN-LIVES, BIRTH, all in a few minutes according to some findings, a sequence which is quite aberrative.

And here is his description of the “Between Lives Implants”:

BETWEEN-LIVES: At death the theta being leaves the body and goes to the between-lives area. Here he “reports in”, is given a strong forgetter implant and is then shot down to a body just before it is born. At least that is the way the old invader in the Earth area was operating.

The implant is very interesting. The preclear is seated before a wheel which contains numbers of pictures. As the wheel turns, these pictures go away from him. He is moved aside to the right, the left, the back. A mirror arrangement shows him still sitting there before the pictures. A force screen hits him through the pictures. The pictures dim out. The whole effect is to give him the impression that he has no past life, that he is no longer the same identity, that his memory has been erased. The force screen flattens his own vitality, thus invalidating his existence, thus installing, by force alone, a forgetter. The pictures, by the way, are simply generalized views, stills of vacant lots, houses, back yards, of a recent Earth period and they could apply to anybody. They are not the facsimiles of the preclear. The incident contains such force that the preclear. at first quite closely in contact runs it willingly. As the force cuts down his past identity he begins to disbelieve the incident, then himself. If left in restimulation he has a difficult time remembering things for some days.

Gradually through a life-time this BETWEEN LIVES incident keys in. At first it engulfs childhood, then later and later years. Finally, with age, the preclear starts to cycle through it automatically and goes into a “second-childhood,” which is to say, he anticipates the coming implant, conceives it to have done if he lives beyond a normal life span for him. (If it usually happened that he died at sixty, should he now live to seventy, he will get a feeling in the last ten years that it has been done to him—a routine time restimulation effect.)

Now, if you are confused how thetans (which are not part of the physical universe) are made to “sit” before a wheel to be tortured, that’s never really explained. That thetans without bodies act like bodies is one of the great mysteries of Hubbard’s cosmology that is never explained.

In History of Man he also entered in another factor that he called the “GE” — though this concept was forgotten fairly soon thereafter. Despite that, it is still taught as part of “The Basics” today.

The GENETIC BEING carries on through the evolutionary line, parallel with the protoplasmic line, generation to generation, usually on the same planet—in this case, EARTH. The THETA BEING comes
into the line from various quarters and each time usually enters an entirely different GE line. Any one life then, is lived with a different GE. The preclear is always and always was and always will be the THETA BEING. But the THETA BEING has, life to life, a different GE. The character and quality of the MEST body then is different in each lifetime, the past of the MEST body in each lifetime is different from the viewpoint of the theta being.

This being true and undisputed fact for all scientologists, I wonder what would happen if when explaining themselves to an Ethics Officer, someone said “it was not ME that raped the woman, that was the GE, you should take this up with him/her/them.” (Not sure what the correct pronoun is for a GE).

The contradictions and craziness in Hubbard’s writings are ignored and must never be questioned.

Frankly, Xenu and the volcanos is at least a strung together “story” that could be categorized as pulpy science fiction. The bizarre bits and pieces of History of Man read more like fevered dream sequences from someone going through heroin withdrawal. Or perhaps an LSD trip.

Just for fun, here is a final excerpt of part of his discussion of “The Clam” which is some serious hallucination:

THE CLAM is a deadly incident but mostly when restimulated on purpose. Although this area of the track is called the CLAM, it is improbable that the actual animal was a clam such as our razorbacks. Visios on this seem to indicate that it is a scalloped-lip, white-shelled creature. The clam was, of course, quite thoroughly fixed to the rocks and the state is very static. The clam had many troubles. The first of these troubles is the double-hinge problem. One hinge wishes to stay open, the other tries to close; thus conflict occurs. Here we have two control centres, both of them more or less equal in power, having no internal communication. In the jellyfish we have the first third dynamic engrams where the goal is to hold together at all costs. As soon as the hinges are formed in the clam, we have our first efforts to be completely contrary and internally at war. The solution occurs when one hinge goes into apathy and the other assumes complete control.

The hinge epicentres later become the hinges of the human jaw. Should you desire to confirm this, describe to some uninitiated person the death of a clam without saying what you are describing. “Can you imagine a clam sitting on the beach, opening and closing its shell very rapidly?” (Make a motion with your thumb and forefinger of a rapid opening and closing. The victim may grip his jaws with his hand and feel quite upset. He may even have to have a few teeth pulled: At the very least he will argue as to whether or not the shell stays open at the end or closed. And he will, with no hint of the death aspect of it, talk about the “poor clam” and he will feel quite sad emotionally.

You know, I have tried doing what Hubbard says, and did NOT get the reaction he claims will occur. But then again, I have also told the Xenu and the volcanos tale to many and not a single one of them has come down with pneumonia or died…