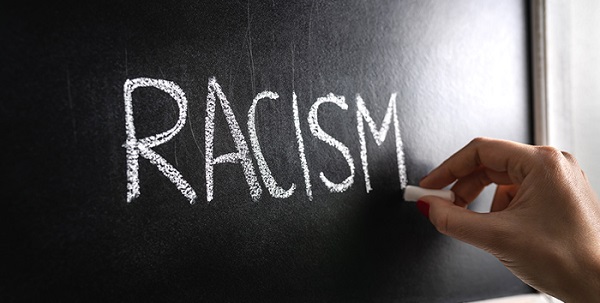 A very revealing collection of Hubbard quotes from the wonderful Scientology 101 website.

If you have never read the article at the Home page of this site “Scientology 101” I very much recommend it.  It is a brilliant summary of MANY aspects of scientology.

I mentioned in my post of yesterday Scientology Targeting Black America that I would provide this collection today. I also note that many of these quotes come from a time when statements such as these were far more acceptable and commonplace, but that does not change the fact that society was more overtly racist then. You will note, especially in the quotes related to South Africa they also reflect Hubbard’s desire to ingratiate himself with the “powers that be.” Though he so often railed against governments and the “aberrated” men who ran them, he was constantly trying to make efforts to be accepted by them. At least until they expressed overt hostility towards him, then they became his avowed enemies. But even then, if he saw an advantage he could gain, he would say whatever it was that he thought they might want to hear.  His willingness to tell “acceptable truths” is very well documented.

It is impossible to read these quotes and not conclude that Hubbard had a very low opinion of anyone who was a member of a non-white race. And some of them would make a dedicated Nazi proud.

“Now we say there’s, well, another place in the world—there’s India. Wonderful place — except for its people.”

“They smell of all the baths they didn’t take. The trouble with China is, there are too many chinks here.” 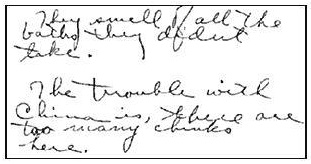 “A Chinaman can not live up to a thing, he always drags it down. Hence…is rather dirty in spite of Japan’s efforts to clean it up.”

“This is the only way I know of to keep Anzo from being deluged with Asiatic hordes.” 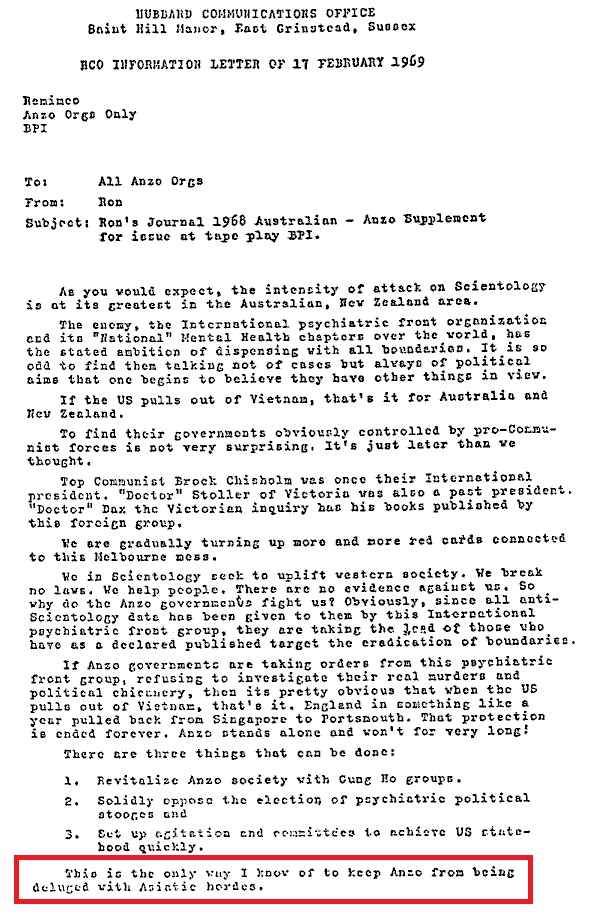 “When this government [Chiang Kaishek’s] finally fell there was no one ready to teach the Chinese the human way of life.”

“…China, slavishly dedicated to ancient scholars, incapable of generating within herself sufficient rulers to continue, without bloodshed, a nation.”

–L. Ron Hubbard, Secrets of the MEST Universe (lecture 1), “Methods of Research: The Thetan as an Energy Unit”, 6 November 1952.

“The very nature of the Chinaman holds him back. If his fellow should fall, John thinks it quite proper that he stamp on the underdogs face.”

“When it comes to the Yellow Races overrunning the world, you may laugh … [The Chinese] have neither the foresight or endurance to overrun any white country in any way except by intermarriage. One American marine could stand off a great many yellowmen without much effort.”

“One of the reasons they [the Japanese] have bad eyesight is probably these microscopic characters [furigana] which have many lines and strokes to them. … We wonder why they went mad and bombed Pearl Harbor when they knew they couldn’t win. That [the Japanese language] would be a reason.”

Hubbard taught school on Guam for one month when he was a young man. The island’s native population, the Chamorros, made an impression upon him:

“In North Africa they had the Arab with the gun and whip, but he could force people to do things … and he accomplished a tremendous amount of extermination, but he certainly didn’t advance that civilization very much.”

“The Arab is to a point where he won’t even follow a decent leader. He’s got to have a man of blood, a man of cruelty, exaggeration and bigotry. Then he’ll follow him.

“…the Arab is trying to be pleased with death and murder and mayhem and disease and poverty and political unrest.”

Hubbard on Egyptians (and French):

“Those small brown men who sell their sisters on the streets of Cairo were once the mighty Egyptians.”

On the Jewish race:

“Furthermore, [Sigmund Freud] had a racial fixation on sex, a fixation sufficiently pronounced to cause it to infect contagiously all modern European stock.”

“And you finally get up to the point of where he’s [native] supposed to take care of something, a lesson which has never been taught to the native of South Africa.”

“The insanity rate per capita in South Africa is appalling. …it is easily seen that a primary requisite in any programme of the rehabilitation of the Bantu in South Africa would be mental health…”

“A “black South African’s” withholds read not only on the needle [of the E-meter] alone but on the Tone Arm [sensitivity adjustment] as well.”

“Perhaps the unusually strong withholds can be explained by the Bantu’s mercenary nature:

Because the one thing — the very, very commercial little culture the Bantu has … the idea of commerce and money and that sort of thing is very deeply ingrained in these people.”

“You’ll find in Africans a fantastic amount of heavy space opera and so on, going on … which makes the colored African very, very interesting to process because he doesn’t know why he goes through all these dances … and why he feels so barbarous ….”

“They took people who were totally dedicated to certain tribal procedures … and said, ‘You’re free.’ And they said, ‘Free. Free? Free. Ah! You mean there’s no police anymore.’ Boom! Boom!”

The Church runs security checks on members suspected of certain criminal behaviors. The Johannesburg Security Check is “the roughest security check in Scientology” and consists of a series of pointed questions which Scientologists answer while on the E-meter (in this case, used more like a lie detector than an auditing tool). Included in the list of “crimes” is engaging in an intimate relationship with a member of a “colored” race. A selected portion of the questions demonstrates the seriousness of this crime:

There are hints that Scientology membership was limited to whites, at least initially, in their organizations in southern Africa.

“Now if we can get white population, immigrants and big companies and so on moving into Africa and if we can get with that Scientology well established in Southern Africa, why we can then look forward to a salvage operation base, in case the northern hemisphere’s lights go out.

–L. Ron Hubbard, recorded talk to the Saint Hill staff about Rhodesia, 6 May 1966

“As South Africa has a white population of only 2.8 million or thereabouts, you can see that every other central organization in the world has been out-created.”

Hubbard appears to have thought the problem of apartheid was overstated.

“The problem of South Africa is different than the world thinks. There is no native problem. The native worker gets more than white workers do in England! […] The South African government is not a police state. It’s easier on people than the United States government!

“For instance, my boy Jamble … I used to tell him “yes, I know Jamble — you’re a good boy even though you do drink and smoke dacca and gamble — that has nothing to do with me, you’re still a good boy” and you know he came way up tone arm. I noticed he drank less and I think he stopped smoking dacca entirely but he didn’t stop gambling because Master used to give him a pound to go out to the race track and lose.

“… tremendous labour supply in the Bantu, the Mshombe, the Matabele, these people are very hard-working people and under proper direction are quite productive. … and here is this perfectly valid labour supply — the African, who at this time is not being well utilised at all …”

“But they served with great enthusiasm. Those people sure can work. The African sure can work. That’s one thing nobody has ever quite noticed about them. They are very hard-working people.”

“Having viewed slum clearance projects in most major cities of the world may I state that you have conceived and created in the Johannesburg townships what is probably the most impressive and adequate resettlement activity in existence.”

“Illiterate cultures do not survive and they are not very high. The natives of the tribe of the Bugga Bugga Booga Boogas down in Lower Bugga Wugga Booga Woog are mostly no longer with us, or they are around waving red flags today and revolting against their central government.

“And they didn’t learn fast. Their literacy was not up to absorbing culture rapidly.