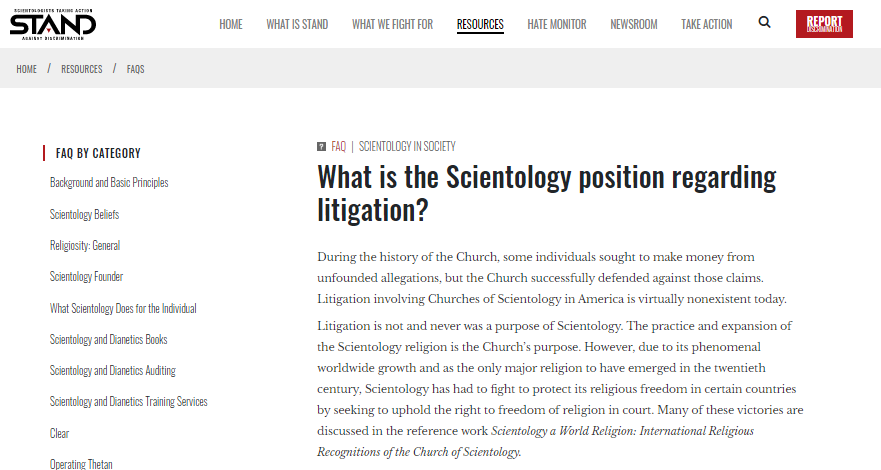 Among the many falsehoods perpetrated on the STAND League website are a series of FAQs where they try to present the image of scientology as victims of predatory, greedy litigants …

It’s a typical fable that gets off to a rollicking start:

During the history of the Church, some individuals sought to make money from unfounded allegations, but the Church successfully defended against those claims.

It’s a false premise for a number of reasons.

Mostly because of the rulings on Arbitration. Eventually, the arbitration agreements are going to be deemed unenforceable. When that happens there will be a flood of lawsuits.

They then go on to list various rulings from Australia, Spain, Italy, Germany and even Russia supposedly recognizing scientology as a religion. But this is very selective cherry picking. In numerous countries (including the UK), scientology is NOT recognized as a legitimate charitable organization as not granted tax exempt status. In Germany they are still on the watch list of organizations that are a threat to the constitution. In Russia scientology is being prosecuted and shut down.

They of course do not mention what Source had to say about litigation. It goes against the image they are trying to portray, so they just don’t mention it. Here are just a few quotes:

The purpose of the suit is to harass and discourage rather than to win. The law can be used very easily to harass, and enough harassment on somebody who is simply on the thin edge anyway, well knowing that he is not authorized, will generally be sufficient to cause his professional decease. If possible, of course, ruin him utterly.

A Manual on the Dissemination of Material (1955

Here is what the 9th Circuit Court of Appeals had to say when RTC appealed an order from the Federal Court sanctioning them $2.9 million for abusing the court system in the case filed against David Mayo:

The facts are as follows: On January 20, 1993, the special master awarded attorneys fees, first under the Lanham Act finding the case exceptional because the plaintiffs [RTC] “have abused the federal court system by using it, inter alia, to destroy their opponents, rather than to resolve an actual dispute over trademark law or any other legal matter.” The master also awarded fees pursuant to the Copyright Act, 17 U.S.C. § 505, finding that the plaintiffs’ complaints had been brought “in bad faith” to harass the individual defendants and destroy the church [AAC] through massive over-litigation and other highly questionable litigation tactics.” The master also awarded fees pursuant to the court’s inherent authority to award fees when the losing party has acted in bad faith. Alyeska Pipeline Service Co. v. Wilderness Society, 421 U.S. 240, 258 (1975). Finally, the master declined to base the attorneys fees award on California contract law because “California contract law might collide with the first amendment in this particular context.”

The master made a succinct statement as to the fees requested, noting that “many attorneys worked many, many hours on this case”; that the hours were reasonable “given the plethora of constitutional issues, discovery stand-offs, appeals, and, most importantly, plaintiffs’ practice of endlessly litigating issues”; and that the hourly rates were reasonable for federal civil practice within the Central District of California. The master recommended an award of $2.9 million.

Moreover, there is little doubt that RTC is playing “fast and loose” with the judicial system as required in the minority view of estoppel. To first assert that its unfair competition and false designation of origin claims are justiciable and at the same time assert that Mayo’s identical claims are not is at best questionable; in light of RTC’s documented history of vexatious behavior, RTC’s actions are indefensible.

This is what the Justice Department said in the Sentencing Memorandum in the criminal case of Mary Sue Hubbard and 10 other senior scientology officials:

These suits were filed by the Church for the sole purpose of financially bankrupting its critics and in order to create an atmosphere of fear so that critics would shy away from exercising the First Amendment rights secured them by the Constitution.

The defendants and their cohorts launched vicious smear campaigns, spreading falsehoods against those they perceived to be enemies of Scientology in order to discredit them and, in some instances,

Scientology initiated law suits often for the sole purpose of harrassment, private citizens who attempted to exercise their First Amendment right to criticize an organization which they considered suspect, and public officials who sought to carry out the duties for which they were elected or appointed in a fair and even-handed manner. To these defendants and their associates, however, anyone who did not agree with them was considered to be an enemy against whom the so-called “fair game doctrine” could be invoked.

…these defendants were willing to frame their critics to the point of giving false testimony under oath against them, and having them arrested and indicted speaks legion for their disdain for the rule of law. Indeed, they arrogantly placed themselves above the law meting out their personal brand of punishment to those “guilty” of opposing their selfish alms.

L. Ron Hubbard wrote in his dictionary entitled “Modern Management Technology Defined” that “truth is what is true for you.” Thus, with the founder’s blessings they could wantonly commit perjury as long as it was in the Interest of Scientology.

It’s a different picture than the STAND bs….