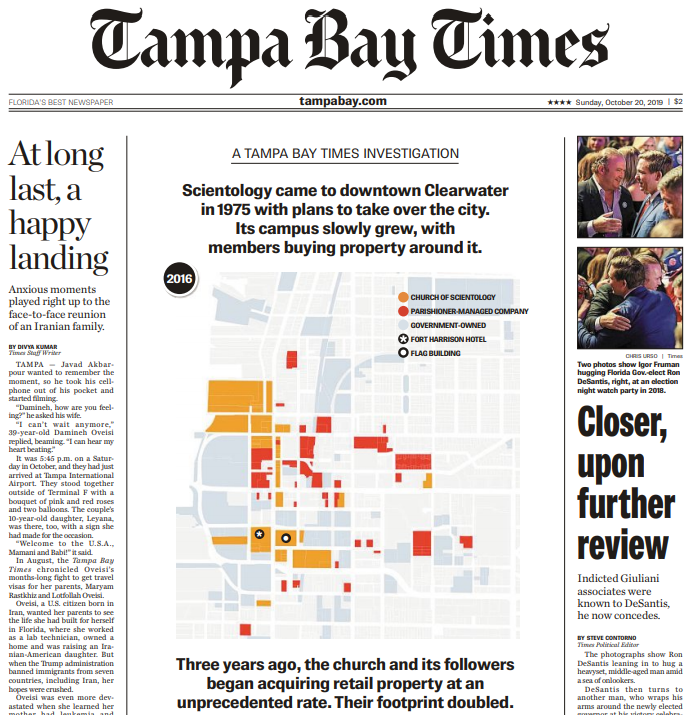 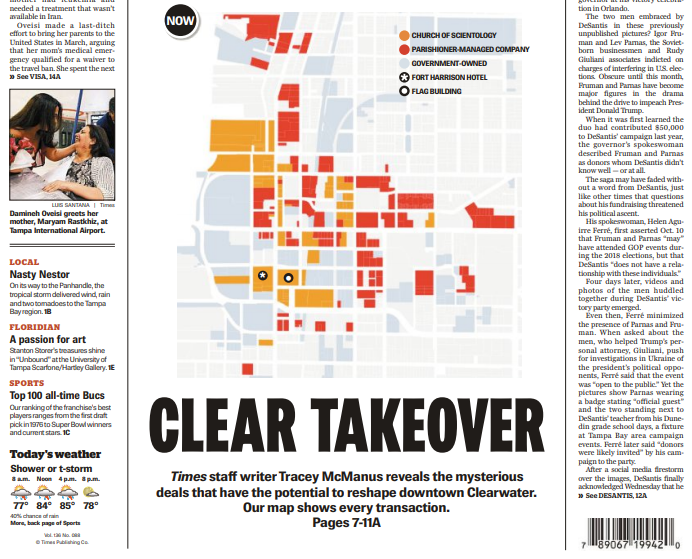 I doubt many people in Clearwater realized just how complete scientology’s takeover of the downtown is.

This is why I have been supporting and promoting Mark Bunker for the city council.

And the urgency of this is further highlighted by a passage in the article.

For the non-residents of Clearwater let me give you a little background that is explained in the article. It concerns the dispute over a piece of property across the street from the Ft Harrison.

In 2016, city consultants began planning what has become a $64 million effort to reinvigorate the waterfront called Imagine Clearwater. They envisioned apartment buildings with ground-floor stores, winding paths with views of the Intracoastal Waterway and a concert venue that would draw visitors from across the region.

In January and February 2017, as the council was preparing to approve the consultants’ concept, a handful of companies bought six commercial properties downtown. They paid $26 million.

After the Times reported the purchases, Miscavige acknowledged the properties were bought for a second revitalization strategy — one devised by the church. In private meetings with council members, the Scientology leader described a plan for high-end shops, Cleveland Street facade renovations and an entertainment complex involving actor Tom Cruise, Scientology’s most famous parishioner. The church promised to spend $55 million.

But his offer had a catch. He wanted the council to stop trying to buy a vacant lot on which the church was also bidding.

The 1.4 acre lot was across the street from City Hall and adjacent to a 13-story Scientology religious retreat. It was owned by the Clearwater Marine Aquarium.

The church offered $15 million for the parcel. Instead, the aquarium sold it to the city in April 2017 for a lot less — $4.25 million. Miscavige cut off communication with the city.

And a little further in the article Tracey returns to this topic and discusses it with one of the City Council members and then this stunning paragraph follows:

When the city was considering buying the aquarium’s lot, Miscavige threatened to stop communicating until the 2020 election, when term limits would force most of the council out of office. Then he would try again, with new council members.

This is the upcoming election that Mark Bunker is going to be running in — for a seat on that very City Council.

It is so important the city fathers understand who and what they are dealing with. Perhaps the downtown is lost to scientology. But even with the effective purchase of the core of the city — the tax-free wealth of scientology is always looking to expand its zone of control. The city government cannot remain oblivious and unwitting facilitators of scientology’s schemes.

They must never forget the mantra dictated by Hubbard concerning the Office of Special Affairs:

The goal of the department is to bring the government and hostile philosophies or societies into a state of complete compliance with the goals of scientology.

Let that sink in. That IS what scientology is seeking to accomplish in Clearwater.