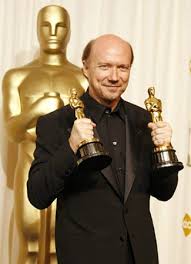 The Hollywood Reporter published an open letter written by Paul Haggis this morning.

In typical Haggis style, he zero’d in on the crux of the matter and showed himself once again to be a man of principle and dignity who clearly articulates his calm and well reasoned points.

Of course, Karin (David Miscavige) Pouw just HAD to respond.  In a page out of their normal “attack the attacker” playbook, they launched an illogical, poorly composed ad hominem assault on Paul Haggis. It does not respond to a SINGLE POINT of his Open Letter.

It is so ridiculous that I am reprinting it here in full. The Church has finally sunk to the level where you can take anything they say and without comment, EVERY SINGLE PERSON who reads it is repulsed. Their venom has poisoned them and as they writhe in their death throes crying that “everyone” is targeting them, the world watches with a wry smile and a sense of witnessing the inevitable.

Here is Miscavige’s response in full:

Mr. Haggis is a status-obsessed screenwriter who in the words of The Hollywood Reporter has been in “the wilderness” professionally for three years. Mr. Haggis once again is exploiting his tenuous connection with Scientology to grab headlines. His statement that the organization anonymously comments negatively about those who leave the Church is delusional and borders on paranoia.

Desperately craving attention, his self-serving “open letter” is a transparent plug for an upcoming film still lacking U.S. distribution. If Mr. Haggis was as successful and prolific at manufacturing drama for audiences as he is at manufacturing it for gossip sites, then his career might have never gotten lost in the “wilderness.”

Despite his spin, the truth is that Mr. Haggis was an inactive Scientologist for more than 30 years until he orchestrated a disingenuous “departure” in 2009 aimed solely at getting media attention. As a result, Paul Haggis has no first-hand knowledge about the Church of Scientology but instead relies on a small collection of unemployed bloggers living on the fringe of the Internet who are obsessed with spinning myths about the Church.

Mr. Haggis has chosen to align himself with a small posse of lunatics with arrest records, who have acknowledged in depositions to being secretly on the payroll of tabloids and who have admitted on national television to outright lying. As for Paul Haggis’ real story, seehttp://www.freedommag.org/special-reports/new-yorker/video- profile-the-many-personas-of-paul-haggis.html. [Link doesn’t work]

As to the true story of Scientology, under the 25-year leadership of Mr. Miscavige, following in the footsteps of our Founder, L. Ron Hubbard, the Church is enjoying tremendous expansion as shown in our 37 new Churches opening in six continents and the many new parishioners joining their congregations. Our Churches are open seven days a week and many have public display areas to answer all questions or one can visit our website, www.Scientology.org.

While I said it needs no comment, there are a few points I wish to make. Just because I can….

Mr. Haggis is a status-obsessed screenwriter — yeah, double Academy Award winner status hound looking for some publicity by talking about Scientology.  He has said nothing about anything since the New Yorker article though there were PLENTY of opportunities for him to do so.  This is really quite amusing, Miscavige seems to be admitting that exposing the bullshit of the church of Scientology is good publicity for movies…. I suppose he also admits that anything that is associated WITH Scientology is death at the box office (Will Smith’s last movie? Tom Cruise a Scientology mummy these days).  I guess the celebrity gravy train that Miscavige rode for many years has finally tipped over and it’s pouring runny brown stuff all over his perfect coif….

His statement that the organization anonymously comments negatively about those who leave the Church is delusional and borders on paranoia — Really? Come now. Did you forget already that THIS MORNING you admitted to the SAME PUBLICATION in response to the Haggis letter that you have “never denied” that you provide content for the “anonymous” smear websites?

Desperately craving attention, his self-serving “open letter” is a transparent plug for an upcoming film still lacking U.S. distribution — As above. I hope his anti-church of Scientology stance results in a flood of distributors lining up at his door.  (Funny, how come Miscavige and his sockpuppets aren’t talking about how the careers of Kirstie Alley and John Travolta and Jenna Elfman have all gone in the toilet??). Who knows if this is even true, but if what the church seems to be claiming — that it is good for business for movie people to trash the church, you can expect a LOT of bad news coming up Dave.

… relies on a small collection of unemployed bloggers living on the fringe of the Internet who are obsessed with spinning myths about the Church — this interestingly is because he is “completely uninformed” even though he was on the cover of the church’s Celebrity magazine. But again, the illogic slaps one in the face. Haggis is unreliable because he knows nothing. The people they cannot say that about (ie the unemployed bloggers on the fringe of the internet — myself “Exhibit 1” presumably) are unreliable because… well, just because. No, because we are obsessed with spinning myths. Hmmmm.  So you either do know and just lie or you know nothing. It’s the black and white world of Miscavige PR spin….

…has chosen to align himself with a small posse of lunatics with arrest records — Hmmm, I miss out on this one. Though its not from lack of the church trying. They have filed I dont know how many complaints asking to have me arrested. But funnily enough, I have not been in touch with Paul Haggis for over a year — not until the church responded to his letter today. And I know Tony Ortega has not been in touch with him. Maybe Tony has an arrest record from when he was in college or for protesting against human rights abuses or something. I don’t think so, but by this standard, Gandhi would not meet the Miscavige requirements as a reliable source. Update: Tony Ortega has confirmed he has never been arrested, has never defaulted a loan, never been sued and has no tax liens…. Why am I surprised? I guess they weren’t talking about us….

Mr. Miscavige, following in the footsteps of our Founder, L. Ron Hubbard, the Church is enjoying tremendous expansion as shown in our 37 new Churches opening –– Now let me ask WHO it is that is trying to insert themselves into the media to get some publicity???  Surely “Mr. Miscavige” isnt going to try to get a plug for HIS 37 “new” churches AGAIN?? But he has a new twist — he is now “following in the footsteps” of “our founder”. Oh come on. Can anyone reading this imagine writing this ABOUT HIMSELF!!!

It sucks to be Miscavige…. Really.