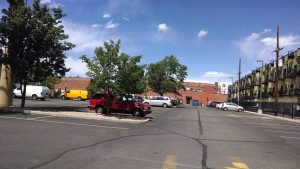 The Colorado Rockies parking lot that doubles as an "ideal" scientology org in Denver has just sent out an exclamation-laced update announcing the amazing news that they had 19 people on service IN A MONTH (July)! And you can bet most of them were on "Basics" courses, Student Hat and Purif. Remember, this "ideal" org, like all the others, is supposed to accommodate 200 students IN THE ACADEMY and has 40 auditing rooms and is supposed to be servicing 300 - 500 people in Division 6 each week. But more than 6 YEARS after being announced as "ideal", they have seen so few people (other … END_OF_DOCUMENT_TOKEN_TO_BE_REPLACED 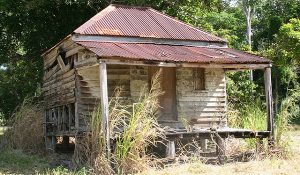 This information was provided by one of our readers who has familiarity with the situation in St. Louis and is a follow up to the earlier post The Real State of Scientology, St Louis Style.   Church of Scientology Missouri owns a building at 6901 Delmar in University City. It is approximately 15,000 sq.ft. on three floors with parking for about 50 cars. They have a mortgage of about $900,000 on that building and have had the mortgage, as far as I know, during the entire decade of bankrupting members for the "Ideal Org" -- the new building they purchased in 2007. I … END_OF_DOCUMENT_TOKEN_TO_BE_REPLACED 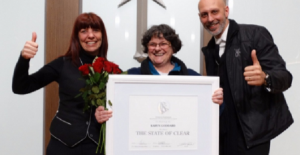 On January 21, 2017, Auckland was graced by the presence of the Dear Leader himself, yanking his red ribbon in semi-public view (only his dedicated followers are allowed to catch a glimpse of the great man in person) as he swung open the doors to another of his "gifts to the community." 18 months later, they have apparently (and proudly) produced their 8th clear. That's 5 or so per YEAR. That is what passes for "ideal" as far as scientology is concerned. The population of the country is 4.8 million, growing about 200,000 per year. There is no other in the entire nation (even though … END_OF_DOCUMENT_TOKEN_TO_BE_REPLACED

You can bet this is not an isolated example, just happens to be something sent to me in the last few days. Apparently things are pretty grim in the Denver "ideal" field. Can you imagine someone who IS disaffected responding to this command to come in to be investigated? But policy says HCO can issue a "summons" -- and policy is NEVER wrong. So, they do the most asinine things and then a whole lot of explaining as to why it didn't work "too much suppression", "the SP's are going wild" etc etc What is most interesting about this is how contradictory it is to the hype they sell … END_OF_DOCUMENT_TOKEN_TO_BE_REPLACED

This fundraising pitch highlights a truth about scientology they try so hard to avoid. Far from "taking over the planet" and "Clearing Earth", they are in fact going backwards. A whole promotional piece to highlight the wonders and importance of South Korea. There has NEVER been a single mission, let along scientology church in this nation. Just as there has not been in China. 1.5 billion people and not a single mission. Another billion in India and not a single org (half the missions that previously opened there have closed). In fact, in all of Asia and the Indian subcontinent there … END_OF_DOCUMENT_TOKEN_TO_BE_REPLACED 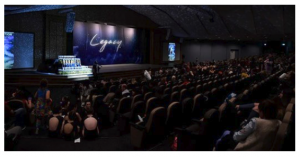 More "ideal org" fail. This one is a complete enigma. A single, bankrupt Mission suddenly became an "ideal org". For no good reason. Staff were imported from around the world and Miscavige displayed his ribbon yanking prowess for all to see (well, "all" being scientologists only, who had to be flown in for the occasion to make it look like there were at least a couple of hundred interested enough to pay their respects). Now, reality has set in. Someone alerted me to their Facebook page where they are trying to get people to use their auditorium. This posting has ONE comment … END_OF_DOCUMENT_TOKEN_TO_BE_REPLACED 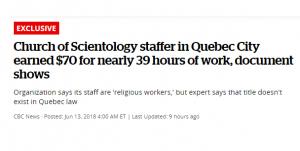 This was a recent article in Canada about the Quebec City "ideal" org.   There are a few things of note. The sleaze that scientology staff are "volunteers" has worked in a lot of countries and states. Apparently, their luck ran out in Quebec. It is a farce to claim that people who often work 60, 70 or 80 hours a week on a "staff pay system" with contracts that have enforcement clauses if the full term is not served are "volunteers." It strains all credibility when you see the recruitment pitches to join offering $500 to $1000 per week (see last Thursday Funnies). As the … END_OF_DOCUMENT_TOKEN_TO_BE_REPLACED 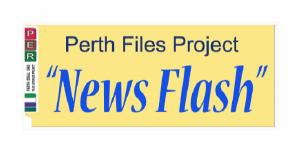 More proof that the ideal org program has devolved into desperate insanity. This is a NEW piece from Perth Org. Apparently, this ideal org, that Miscavige yanked his ribbon on a month ago now, was incapable of getting their filing done before moving into their $20 million dollar building. And still hasn't managed it to this day! Remember how this went on for months and months -- just look back at the Thursday Funnies. The begging and cajoling to try to get their backlogged filing done was legendary. Like every other "ideal" org. That an organization cannot muster enough manpower to … END_OF_DOCUMENT_TOKEN_TO_BE_REPLACED

Some of the claims made about Ideal Orgs defy belief. Even for a cynical bitter defrocked apostate on the fringes of the internet. This is the latest fundraising pitch for the Detroit ideal org. Detroit org has been there for half a century (perhaps more?) and it has created absolutely NO impact. They admit nobody in Detroit even knows what scientology is. They probably know the word and the information from the internet and The Aftermath and Going Clear -- but in the minds of scientologists that means they don't know what scientology REALLY is. They are only aware of the … END_OF_DOCUMENT_TOKEN_TO_BE_REPLACED

This is the headline scientology has on their website announcing the "new" org in Orlando. A STAR BURSTS IN “THE CITY BEAUTIFUL” AS A RIBBON FALLS ON THE NEW CHURCH OF SCIENTOLOGY Complete gibberish. And it goes on for paragraphs, starting with this: A “Magic Kingdom” of a metropolitan region where enchantment is routine, the surreal is real and stars are wished upon, the “Theme Park Capital of the World” is entirely unique. Home to wonderlands such as Walt Disney World, SeaWorld Orlando, Universal Studios and the Wizarding World of Harry Potter among many more, Orlando’s massive … END_OF_DOCUMENT_TOKEN_TO_BE_REPLACED