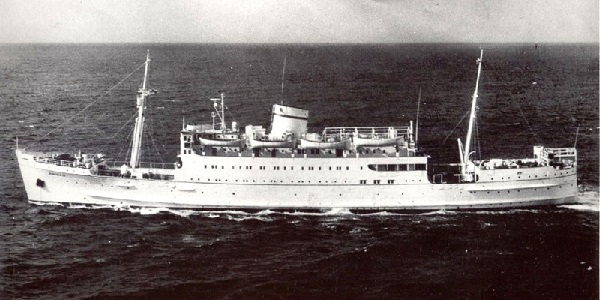 Another post from my friend and former shipmate, Gary Reisdorf.

I was just leaving the most forward room on the Apollo, the foc’sle, when I heard the commotion.  The most forward cabin was the Deck Force’s storage room, called the Bosun’s Locker, where we stored all of the paint and ropes we used when working on the ship.  Being a Deckhand, I started my day preparing paint, paintbrushes and rollers for a day’s painting and ended the day cleaning brushes and rollers, all in the Bosun’s Locker.  Being the most forward part of the ship, it was away from seniors, officers and every other pest.  It was a peaceful, safe place for the Deckhands.

When I came running out, Rudy Savage had our Captain, Norman Starkey pinned down, with one hand on his neck choking him and was lifting his arm to strike the him, when Pat McCullough grabbed his arm.  The Captain’s face was turning red with his eyes starting to bulge but with Rudy’s size and strength, he couldn’t get away.  Rudy Savage, Bob Dilts and I used to lift weights daily together at every lunch break and Rudy was strong as hell, so Pat had to hang his entire body weight on Rudy’s one arm to keep him from swinging.  Pat managed to break up the potential punch-up, even though Rudy could bench press over 300 lbs.  Rudy also weighed over 300 lbs.

Rudy was a great guy, as was Dilts, and they looked after me like a little brother.  I think I was 18 at the time (it was late 1971) and could only bench press 180 lbs but I still loved to work out with these 2.  Rudy and Dilts were over 6 feet tall and both were very big men.  I looked up to these 2 as one would with older brothers.  They were kind-hearted men.

This incident was right after we snapped about 10 lines of the ship while at the dock in Agadir, Morocco.  The dock was unprotected with no breakwater to shelter it from incoming swells.  To make matters worse the dock did not go completely to the bottom, so in a sense, it was hollow except for the cement stanchions that supported the dock.  I guess that would normally not be a problem but we got hit with some huge, freak swells one afternoon, probably about 10 feet high that came directly at the dock, which had no protection.   Due to this lack of breakwater or barriers to protect the dock area, the ship was basically picked up with a swell when it came in, and then slammed back down again at a rather huge pace and distance.  This caused us to lose about 5 polyprop lines and 4 or 5 steel rope lines.

The polyprop lines were 4” in diameter and made of polypropylene material.  They would take a lot of strain and the ship used them to not only secure the ship at dock, but when initially docking the boat we would use the ship’s winches to pull the ship close in to the dock.  The polyprop lines could stretch quite a bit before breaking.  The other rope, wire ropes were 3/4” in diameter, and were made of steel strands twisted around a fibre core.  Although these were stronger than the polyprop lines, they did not have the stretchability that polyprop affords.

The Captain sent me and a few other deckies out on the dock to put new, replacement lines onto bollards, after one would snap.  It was dusk and when the steel ropes snapped one could see sparks fly.   Seeing the sparks and hearing the explosion of them snapping was scary enough but one of the wire ropes snapped right in front of me.  I could hear it like the uncoiling of a whip being snapped.  If one of these ropes had hit me, it would have decapitated me.  This one was close!  I had about 3 explosions of wire ropes breaking that evening while on the dock.  I was scared out of my mind, but I got lucky and didn’t get hit.

Finally, the Commodore decided we had had enough of the 3 hour beating. We were running out of ropes to snap, and potential deckhands to kill, so we moved out to anchor.  Now it even got worse!  We set 2 forward anchors and also dropped the aft anchor.  Normally at anchor, we only had to drop 1 or 2 forward anchors but the swells were so powerful we had to have all 3 anchors set.  Well, no more than 2 hours went by and the aft anchor snapped off.  During those hours the Deputy Captain, Mike Douglas (RIP), managed to get well into a bottle of wine.  He was actually on duty as the active Captain (called, the Con of the Watch) at the time, so when we lost the anchor, the Commodore sent messengers to him to find out what happened and how he was handling it.  Well, whoever the messenger was, could smell the wine on his breath and Mike was in big trouble.  I don’t know what we did to handle the situation but I know we were dragging anchor and therefore moving.  I think we had to use the engines, in addition to the 2 forward anchors, to keep from heading back towards shore.  Mike got assigned treason for his drinking while on duty and demoted to 2nd Galley Storesman.

So with 10 snapped lines and one lost anchor, the deck force knew we had our work cut out for us.  Turned out the Commodore thought more than just that, he put the entire deck force in Liability.  With this horrible condition, it meant that we could not have a day off and had to work full time other than 8 hours of sleep per night.  That liability condition lasted for 6 months as enforced by Captain Starkey.  I remember it well because 2 weeks before the Agadir incident, I bought a brand new bicycle that I saved $150.00 for.  It was beautiful and I looked forward to riding it on my days off in all of the exotic ports we visited.  Well, I left that bike on the aft well deck and after 6 months of liability, my new bike was rusted.  I sold it for $20.00 to someone that was allowed a day off and apparently had time to clean the rust.  I think I rode that bike a total of 5 miles which is about $26 per mile.  Nice.

The reason we got a liability condition is that we hadn’t oiled the steel rope, and per LRH that is why they snapped.  Looking back at this, I would say the rope could have been soaked daily in oil and they would have snapped with the strength of the waves and this huge ship being thrown about.  So we had to run every wire rope thru oil so this wouldn’t recur.  It was quite a job as they were long ropes.  We also were blamed for the anchor snapping as we hadn’t oiled the anchor chain.  Another REALLY stupid excuse.  Putting some oil on a solid steel anchor chain was not going to stop it from snapping in that violent sea.  This was a 40 or 50 year old ship with the original anchor chain and putting oil on it after being in salt water and sitting in a chain locker was not going to make any difference.  But, there I was with my fellow deckhand, Steve Nichols, running a 50 year old, rusted anchor chain thru a bucket of oil.  The only way to make that chain work with more certainty would have been to replace it with a brand new one.  But, we stayed in liability until we had all of the chain oiled and all of the wire ropes oiled.

The truth of the matter is that none of this catastrophe would have happened if the Captain had found a better berth for the ship and kept track of the weather and swells.  If he had gone to anchor immediately, we would have only snapped the aft anchor.  But, the Captain wasn’t punished and everyone knows what rolls downhill.

Being in liability, we had to work from morning until night without time off or study time.  16 hours of work was the norm in this condition.  It took it’s toll on all of the Deckhands.  Rudy, who was our 1st Mate, was about 50 years old and was feeling the strain.  Captain Starkey started “heavily questioning” Rudy about where the new wire rope was that he was supposed to purchase.  It must have gotten into a heated argument.  No 300 lbs, 50 year old black man, who has been subjected to sleep deprivation, was going to accept some 35 year old, possibly apartheid-influenced, South African yelling at him, as only Captain Starkey could do.

I always felt that Starkey controlled his crew with fear whereas previously Captain Bill Robertson had treated people with respect and got respect in return.  In later years, (early 80’s forward) Norman Starkey ended up working closely with David Miscavige, who is the current Chairman of the Board for the Church of Scientology. I wonder how much influence Norman had on Miscavige and the way he ended up treating his staff.

Rudy’s reaction to Norman’s verbal assault was to throw the Captain onto his back, on the forward hole cover and almost strike him, until Pat McCullough grabbed Rudy’s arm.  If Pat hadn’t interfered, I’m sure Norman would have been nicely pounded.  At that time, and with the abuse I was going through, I was seriously sad that my good friend, Pat, interfered and stopped the beating.

LRH found out about this incident with Rudy.  But stop.  I must admit that mutiny on a ship will never be tolerated, no matter how much of a difficult captain one has. LRH said it was mutiny and Rudy was offloaded the next day.  No Committee of Evidence, no hearing, just GONE.  Nothing but his clothes in a suitcase and sent off the ship in Agadir, Morocco.  A big, black American sent off in a foreign country where he did not know French, Spanish or Arabic and who knows how much money he had.  I would imagine, not much, as we were only paid $10.00 per week.  I felt quite sad that I lost my good friend, Rudy and also sad for Rudy’s fate.  I was deathly afraid that the deck force were all going to get sec-checked to find out our real views on this and whose side we took.  I strongly and privately detested Norman and secretly wished that no one had interfered with Rudy and he would have given Starkey a smack that he would never forget.  If my true feelings were discovered, I probably would have been offloaded too in Morocco, at 18 years old.  Luckily, LRH left us alone on that one.  But, this left me having to put up with Captain Starkey for the next 10 years of my life in some manner or the other. In hindsight, going thru Morocco with Rudy and making our way back to the states could have been a better option than remaining on board.  You never know.

My good friend Rudy let me down by not following through with the punch that day.  He was strong enough to follow through quite easily and my other good friend Pat, let me down for interfering.

Sadly, I believe that Rudy has passed away and I know that Pat has also passed.  It is funny that how 40 some odd years later, you still miss such good people, good friends.