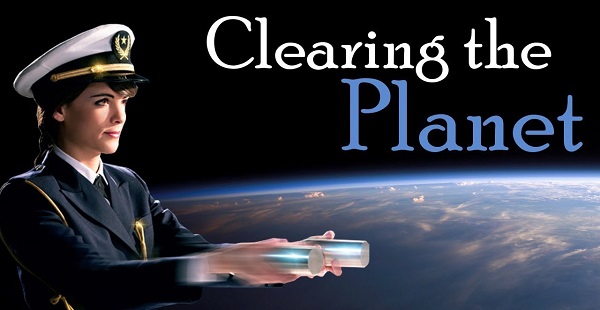 Things are in a bad way in the 2 orgs in Venezuela (one in Valencia and one in Caracas). This is a plea from the ED of the Valencia ("Venezuela") org for assistance. It is full of typical scientology hype about how they are saving the world etc etc. and some wonderfully outdated quotes from Source to make things seem better and pretend they are winning. But harsh reality has set in. Venezuela is in economic meltdown. Hyper inflation. Lack of food. Gas shortages (remarkable in a country that exports massive amounts of oil)... She says they no longer have the resources to support … END_OF_DOCUMENT_TOKEN_TO_BE_REPLACED

Here's some news from Canada. It's a pretty good snapshot of scientology across the planet. The hype about Extension Courses is going to come back to bite them in the butt once the lockdown is over. "Intensive gains" from reading books. Who needs auditing? If this is so good, why would anyone ever need to go into an org again? It's going to be interesting to watch how many people use this as an excuse to avoid coming into orgs in the future. It is pretty funny that after two months they are still "accelerating towards 10X."  With the staff and Sea Org pretty much idle, they are … END_OF_DOCUMENT_TOKEN_TO_BE_REPLACED 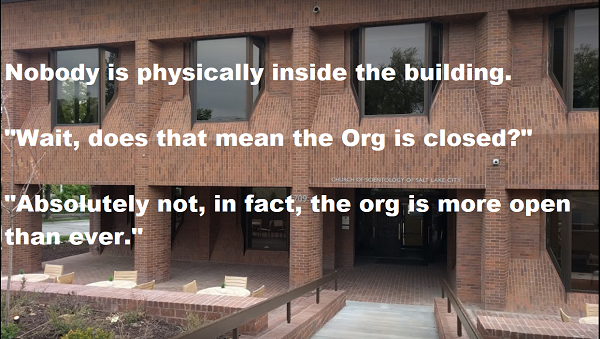 I was forwarded this email from the EDs of Salt Lake City "ideal" org. I reprint it here with spelling errors/typos exactly as it was received. Another confirmation that this org is closed (public are not receiving services physically inside the org) -- but they then go on in typical scientology style to say the answer to the question "Wait, does that mean the Org is closed?" is "Absolutely not, in fact, the org is more open than ever."  Only in the deluded world of scientology would a shuttered org be more open than ever... But "more open than ever" translates into more desperate for … END_OF_DOCUMENT_TOKEN_TO_BE_REPLACED 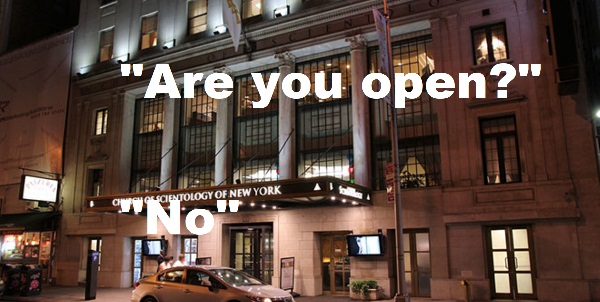 While it appears to be business as usual at Flag (and likely the other Sea Org orgs), it seems there may be a shift at the lower echelons of the hierarchy. One of our dedicated readers sent in a report that a local org is telling their public "they will be closing for 2 weeks." Another called the NY Org and asked simply "Are you open?", and the guy on reception said "No."  The caller waited, thinking there would be some elaboration and the line remained silent. No further information was forthcoming. Perhaps some of our other readers could call your local org and ask them if they are … END_OF_DOCUMENT_TOKEN_TO_BE_REPLACED 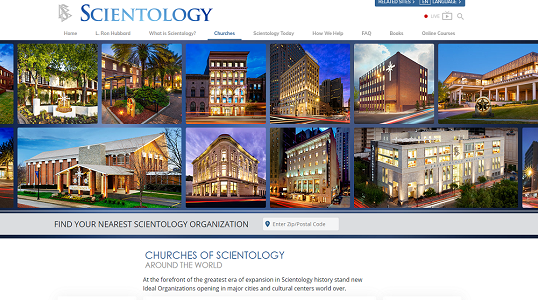 There has been some discussion on the blog of late about Day and Foundation Orgs. It is an interesting topic in the face of scientology's bold statements about their "greatest expansion in history." I have commented that almost all of the Foundation Orgs have been closed by Miscavige as he rolls forward with his "ideal orgs" real estate investment scheme. Newcomers to the subject of scientology may not understand what this terminology means, so I thought I would be provide you with some "source" on the subject, taken out of OEC Volume 7 which contains a section about the "Foundation … END_OF_DOCUMENT_TOKEN_TO_BE_REPLACED 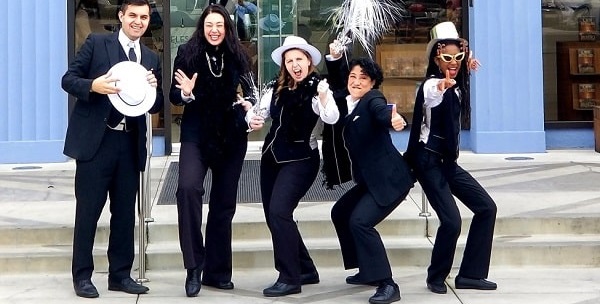 LA Org is the "model" for all scientology Class V level organizations -- even though Miscavige made it into a Sea Org installation. Oddly, the "model" cannot be duplicated in other places in the world and it remains the only Sea Org Class V org. There used to be another one -- St Hill Fdn in the UK that was supposed to service the "local East Grinstead public" in the Castle, but apparently Miscavige closed that down as if you enter your location as East Grinstead on scientology.org it directs you to London Org and Brighton Org. I hadn't realized he closed down that org too in his era of … END_OF_DOCUMENT_TOKEN_TO_BE_REPLACED 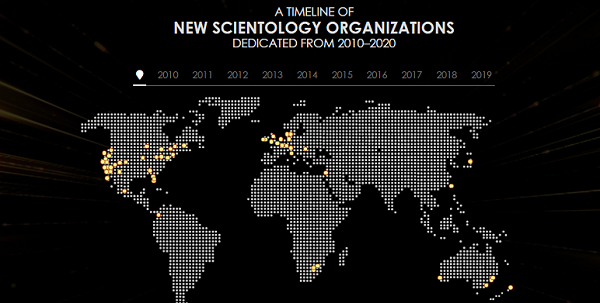 This poster has few words but says an awful lot. The "notice" at the bottom is clearly a legal disclaimer put there by lawyers to protect scientology. Scientology in Australia got into trouble with the government for not paying staff and providing inadequate health care and other benefits afforded all workers in Australia. They asserted that everyone on staff is a "volunteer" and pretty much got away with it. Can you imagine a "volunteer" of any other organization signing a 5 year contract of employment (maybe it's designated a "Volunteer Agreement" - but in spite of its name that is … END_OF_DOCUMENT_TOKEN_TO_BE_REPLACED 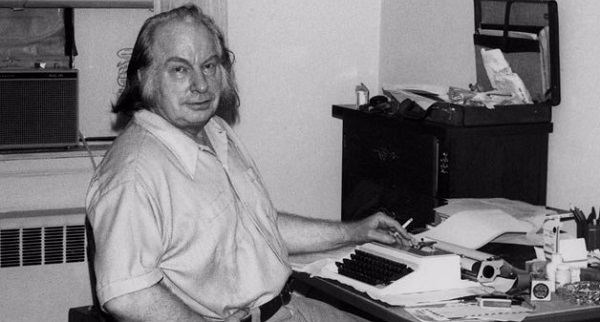 Look what St. Hill is promoting... The wonders of the (empty) Briefing Course -- the greatest course ever taught by L. Ron Hubbard. In the halcyon years of scientology in the early 60's he delivered more than 400 lectures to students who had come from around the world to learn at the feet of the master. It has been promoted since that time as the most complete and comprehensive study of scientology that made the best auditors. You truly were not a professional auditor of any stature unless you had done the "BC" and became one of  "The Dukes of the Auditor Elite." Yet, since GAT II there … END_OF_DOCUMENT_TOKEN_TO_BE_REPLACED 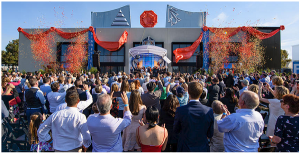 This is Scientology's headline on their website following David Miscavige's parking lot ribbon yanking: DOWN UNDER’S “CITY OF LIGHTS” WELCOMES NEWEST CHURCH OF SCIENTOLOGY This is a double lie. First, there is no "new church of scientology" in Perth. There is a new building, but that is not a "new church." It's the same crappy little scientology group that has been there for 50 years and has never amounted to anything. Second, nobody welcomed them, except themselves. Here are a few excerpts of Shermanspeak about the opening: Perth may be far-flung, but the city’s can-do, … END_OF_DOCUMENT_TOKEN_TO_BE_REPLACED