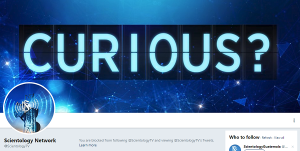 Scientology is taking to the airwaves (sort of) tonight. It's interesting times. They put out a press release that resulted in this story in THR: This story highlights just a few of their problems. They have nobody willing to talk to the media, and apparently these days, nobody willing to respond in any way. Not the recipe for success in this field. Every story that mentions scientology tv is going to mention Going Clear and The Aftermath -- that favor will not be returned. Scientology TV is  a novelty that will be forgotten fast. A quick scan of the comments on this … END_OF_DOCUMENT_TOKEN_TO_BE_REPLACED 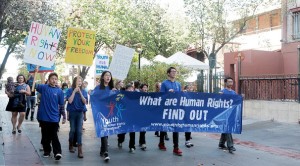 Scientology takes great pains to present itself to the world as a champion of human rights. Their tag line is "Making Human Rights A Global Reality." Look at their website - the Universal Declaration of Human Rights (UDHR) is prominently featured.  And their efforts to "ensure the human rights of everyone" are mentioned extensively. Same in Freedom magazine (when it is published -- seems to have dried up of late). Videos showing their wondrous human rights programs are routinely shown at Miscavige's Nuremberg Rally events.   Here is the Freedom magazine home … END_OF_DOCUMENT_TOKEN_TO_BE_REPLACED

Despite the "best efforts" of the church of scientology, the Academy of Motion Picture Arts and Sciences announced today their "short list" of films up for selection in the Documentary category for this year. Dave's footbullets seem to have had the appropriate effect. Going Clear is one of the 15 included in the short list. Looking forward to January 14th to see if Going Clear is one of the final nominees. Regardless -- this is the first time in history that any scientology related film has been on anyone's list for anything -- let alone an Academy Award (after already having won … END_OF_DOCUMENT_TOKEN_TO_BE_REPLACED 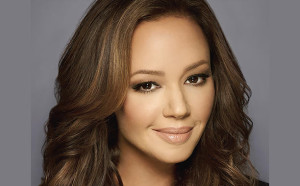 What can Miscavige do to respond to Hurricane Leah? She is blowing his house down and it is a storm that comes on top of severe damage already inflicted on the once apparently impregnable fortress of scientology. It has been building throughout the year -- Going Clear at Sundance got the ball rolling. Followed by the revelations from the PI's tailing his father which thrust scientology back into the headlines. Losing tax exemption in the Netherlands. Tony Ortega's Unbreakable Miss Lovely, a never ending stream of Narconon bad news. And much more. And now Troublemaker has stepped it up … END_OF_DOCUMENT_TOKEN_TO_BE_REPLACED 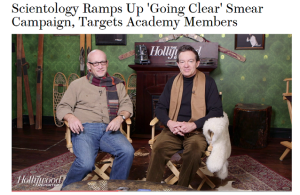 An article in THR today: As usual, Scientology is shooting itself in the foot. They send goons to screenings and have Freedom "reporters" doing clumsy, noisy investigations. Contacting Academy Members to try and influence them not to vote for Going Clear is such typical ham-fisted Miscavige "PR". He never ceases to amaze. HBO should send him a large fruit basket when Going Clear is nominated. And they should take out a full page as in the NY Times thanking him for his contribution if it wins Best Documentary. And if it does win, and I get a chance to say anything about … END_OF_DOCUMENT_TOKEN_TO_BE_REPLACED

The hits just keep on coming. From the LA Times:   This is the FilmRise webpage:     And it is also available on Vimeo: And if you want to do it the old-school way, as of today, you can buy the DVD on Amazon for $16.99. So anyone who has not been able to see the film on HBO or in a local theater can now order it from Amazon or watch it as a streaming video. Miscavige's annus horribilis is just not getting any better. Next up:  Louis Theroux's My Scientology Movie at the London Film Festival on October 14. Followed by Leah Remini's … END_OF_DOCUMENT_TOKEN_TO_BE_REPLACED 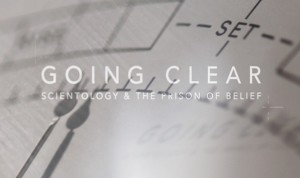 It is now official. Scientology's latest censorship effort has inevitably proven to be another in their long series of PR footbullets.   The screening of Going Clear on Friday 2 October will begin at 7pm at Muvico Palm Harbor. After the screening, the theater manager has set aside 45 minutes for Q and A and both Sara Goldberg and I will be happy to answer questions. In addition,  renowned Tampa CBS affiliate investigative reporting veteran Mike Deeson has agreed to be the moderator for the Q and A session. Mike adds his 30+ years of Bay … END_OF_DOCUMENT_TOKEN_TO_BE_REPLACED

Scientology appears to believe they can now tell the citizens of Clearwater what movies they can watch. Another PR footbullet from scientology. I wonder if COB Theaters are ready for the backlash for buckling to scientology's "threats" not to show the film? It's still on their website even.... Wonder if they might change their minds about being scientology bitches when word gets out? And I wonder how this is going to effect the Academy Award voters. This is REALLY dangerous territory to be censoring movies. If there was not already a backlash in Hollywood, this might bring it … END_OF_DOCUMENT_TOKEN_TO_BE_REPLACED 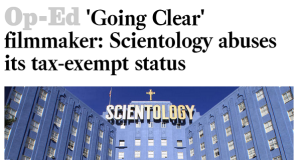 Clearly, the Alex Gibney OpEd piece in the LA Times is still giving Miscavige heartburn. And he has no response other than a lame letter to the editor by his spokespuppet Monique Yingling. This is the latest appeared in the Razzline. Sent by a "public scientologist" from a "csi.com" (church of scientology international) email address.... All they can do is hope to generate "positive comments" -- using a "screen name"? Good luck with that. From: Xxxxx  Xxxxx [mailto:xxxxx@csi.com] Sent: Monday, April 27, 2015 3:04 PM To: Subject: "Scientology deserves its tax exemption" - LA Times … END_OF_DOCUMENT_TOKEN_TO_BE_REPLACED

It would appear that the statements made in the wake of Going Clear by Alex Gibney have struck a nerve, especially his OpEd piece in the LA Times. David Miscavige has trotted out his second favorite scientology spokespuppet (after Karin Pouw), non-scientologist lawyer Monique Yingling. She strangely appeared to defend the non-practice of "disconnection" on Anderson Cooper, and also came to visit me one time to discuss whether I wanted to speak to my children and other family members. She is sort of a Girl Friday who fills in as an Ethics Officer/IJC and spokesperson when needed. She is … END_OF_DOCUMENT_TOKEN_TO_BE_REPLACED